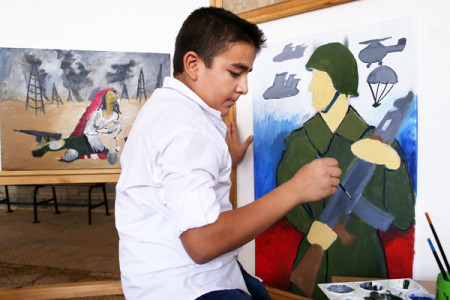 DAMASCUS, SYRIA. OCTOBER 25, 2015. A drawing class in a school for orphans of Syrian Army officers who died during military operations.

Original by Darya Andreyeva published by Russkaya Planeta; translated from Russian by J.Hawk

Dmitriy Steshin (on the photo above) and Aleksandr Kots are special correspondents for Komsomolskaya Pravda and genuine heroes of the information war. They reported on several armed conflicts around the world, spent months on the Donbass, and are now providing stark reporting from Syria, where a Russian aerial operation is underway against the IS. During his leave Steshin found time to answer RP’s questions. He compared the Syria and Donbass wars, talked about what’s left out of his reporting, and explained why it’s easier for Russian journalists to work in Syria than Western ones.

–Right now you are in Moscow. Why the break? Nothing going on at the front? What’s happening in Syria right now, anyway?

–A month and a half on assignment to a war zone is enough, one has to recall the individual or rotate. There’s heavy fighting in Syria, literally over every house or meter of a road. The mass reader is not as interested in those, but that’s our audience. We think that nobody expected hundred-kilometer breakthroughs or huge cauldrons in Syria. Instead, the objective was a war of attrition with Russian assistance. Modern war is a war of resources–who has more, wins. Judging that when we were working at the hottest sectors of the front–Salma, Idlib, Kharasta, Jobar, we were not getting return fire, unlike on the Donbass. The enemy was afraid to reveal own positions. The enemy also has a real shortage of ammunition. That’s the main effect of Russian air support. Because even a couple of months ago it was the other way around.

–You spent a lot of time in Donetsk. How different are these wars, from the emotional perspective? Any common features?

–There is strongly developed machismo [orig. “olenizm”] a term also used on the Donbass, which consists of many things. Inability to hold defensive positions and to prosecute the offensive energetically. Showy disregard for death which leads to senseless losses. Revulsion at fortification work, which also thins the herd. But overall the Syria war is not as horrible and cruel as it seemed. Semon Pegov from LifeNews was the first to express this opinion. We were in Moscow, he went to Syria ahead of us. Almost no enemy counterbattery fire. Syrian artillery can fire from the same position for a whole week. That’s unimaginable in Novorossia. Some of the Syria war takes part in mountains, at elevations of up to 1000 meters.

Apart from the harsh and humid climate, one is struck by the frontline’s configuration in the mountain war, where there are roads which are under enemy fire from a distance of 500m. Attacks are carried out by assault groups consisting of volunteers and very small in numbers. Almost no cases of an entire unit rising to go on the assault, therefore the results of the attacks are rather modest. Syrian troops are also very, very poorly equipped. I haven’t seen a single armored vest. Kevlar helmets are a rarity. Picatinny or Weaver rails, collimating sights, under-barrel grenade launchers, ergonomic grips and stocks, g-shock watches, GPS or tablets with maps, MOLLE load-bearing equipment, top of the line boots–the Syrian Army has none of those things or very few of them. Maybe spec ops units have some. But the Syrian Army will not fight without gas stoves and equipment to make chai. The soldiers are fed at the front line with Arab fast food which is brought in foil packets. The quality is such that not every Moscow restaurant could match it. But otherwise I felt the soldiers are motivated, their spirits rose after Russia’s intervention and they are determined to win. Because they have nowhere to retreat and nobody is stupid enough to live under the IS. Which only proves it every day with its own insane videos.

–If the fighting on the Donbass resumes, will you go back there or do you prefer to work on Syria? Do you believe there is a deal in the making–Syria for Donbass?

–I’ll go back to the Donbass, naturally. I don’t believe in such deals which couch-borne “patriots-on-duty” have managed to discern. I rather think the situation is as follows: the information focus shifted from Ukraine to the Middle East, and it really bothers Kiev. I think they understand that as soon as the Syria crisis is resolved, on the Donbass and in all of Ukraine they will get down to brass tacks. And no US Sixth Fleet will launch a landing in Odessa or block the Black Sea to our Northern Fleet, for example. Because right now the Mediterranean is our internal sea. We have a huge naval and air base there in Latakia. That’s how things are now.

–Are we winning in the war against Western propaganda?

–Judging by the fact that leading world agencies were reduced  to buying the video recordings from two modest Russian journalists, Kots and Steshin, they simply haven’t had another sources for the story. The Ministry of Propaganda thoroughly screens journalists and is right to do so. Because given the example of Graham Phillips (a British journalist who refused to work with leading British media due to the difference in opinion over what is happening in Ukraine), it’s obvious enough how Western media work. And one shouldn’t think that if one were to send a bunch of low-lifes with cameras and one honest journalist, the world would believe the honest one and bureaucrats’ eyes would open and governments would start coming apart at the seams. Western media piggies are lined up by the trough so tightly that no outside snout will penetrate. The honest journalist will simply not be allowed on the air. It’s very simply done. Therefore Syrian authorities simply closed the information spigot. There are Westerners working in Syria, but they were very constrained. Russian journalists had it easier. But they wouldn’t let us into Maalyulya, where Sasha and I went without a special permit. They gave us coffee, thanked for our support, but let us through the checkpoint only after several phone calls. Someone vouched for us.

–How is Russia perceived in Syria? Is Russia’s perception connected solely to the military support or also other things?

–In Syria the attitude toward Russia has always been very good. There are three countries in which I feel perfectly comfortably, like at home: Serbia, Syria, and Mongolia. But Russia’s aid removed all the “brakes.” We were being thanked on the streets, given tea, told that our Facebook accounts are being closely read, given a bottle of arak in a restaurant with a note that said “We’ll never forget your help,” a cook laid out a red star out of lavash. We went through checkpoints without any trouble, using the “military lane.” They opened a bank for us so that we could pay to have our visas extended. I can’t list all the good things, and it’s a very pleasant thought.

–Do you have an interest in antiquities? We really liked the story about the Tikhvin mother of god icon which you found at an antiques shop in Syria and returned home. Have you noticed other historic, cultural, ethnographic evidence of the ties between Russia and Syria?

–The Siro-Yakovits church has ancient ties to the Russian Orthodox Church which go back to before the revolution. There have always been many pilgrims. And every migration stream leaves behind artifacts. And memories. We happened upon the baptism of girls-twins. Their father met with us and told us, literally: “I deliberately gave them names which are common in Russia–Anna and Maria. The fact that Russian journalists showed up at the baptism I take as a sign!” There are Russian traditional holy word icons at the majority of churches and holy sites we visited. There is the Vladimir Mother of God at the Holy Thecla, right at the entrance.

–What’s left out of reporting, what aspects of Syrian life that media ignores could you tell us about? There is also normal peaceful life in Syria’s cities. What’s it like?

–I would really like to tell and and write something about the Alawites, but I don’t know who they are, what they believe, although I tried to delve into available sources. Peaceful life in Syrian cities is very frenetic and crowded. There are waves of aromas from various sources and of various qualities. Walking in the street, you can suddenly walk into the odor of sheep entrails from an animal that was slaughtered a long, long time ago, then you run into heavy and pungent Oriental perfume, then freshly ground cardamom, shaurma on its frying pan, again the smell of sheep carcass and some sewer smell. City life is very open. You can smoke anywhere. Lots of shops with alcohol. There’s a whole district of movie theaters showing tame erotic films. And right next to it there’s a big mosque and all of that is distributed in time and space so that nothing dominates anything else. And doesn’t compete. It’s a big mystery to me–how’s that possible?

–The Russian Airbus A321 catastrophe over the Sinai–do you think it was terrorism? What should we expect if that scenario turns out to be true?

–I have no doubts its terrorism, a bloody message sent to Russia. An attempt to worsen our relationship with Egypt where our “honeymoon” had begun once again. Pardon my cynicism, but the only positive aspect of what happened is that we started to evacuate our crazy and tired citizens from a war zone which due to misunderstanding and dishonesty is considered a tourist zone. Russia should not keep 80 thousand potential hostages in a country which was ruled by Islamic extremists for several years. They haven’t gone anywhere after the coup–there are millions of them in the country.

–The war in Syria is only part of the world war. What’s next? Where else will things flare up?

–I want only one thing: no matter where else things flare up in the Middle East, I want the flames in Syria to go out. So that it becomes an island of safety, and Latakia becomes our tourist heaven where even in late October it’s 35 degrees Celsius.