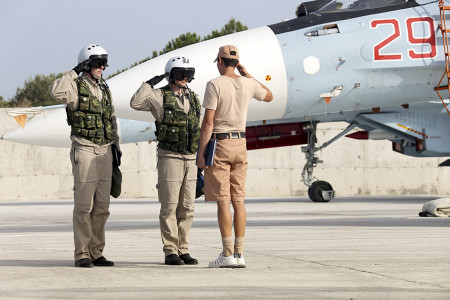 A ground crew member reports to pilots that their Sukhoi Su-30 fighter jet is ready for a combat mission at Hmeymim air base near Latakia, Syria, in this handout photograph released by Russia’s Defence Ministry, October 22, 2015. (Photo by Reuters/Ministry of Defence of the Russian Federation)

The order to begin the withdrawal of Russian forces from Syria, which occurred wholly unexpectedly and even as these forces were engaged in a successful offensive against Islamist forces naturally requires a closer look. There are several possible mutually complementary explanations as to what had happened, though some are more plausible than others.

As has been predicted by many analysts already in September, Russia’s window of opportunity in Syria would remain open only until April, when the sand storm season would begin. The severity of the sand storms means that military operations become far more difficult to perform, including air operations, since the fine sand particles do pose a threat to aircraft engines. Nevertheless, if this were a problem, it would have been sufficient to place the aircraft “under wraps” or in hangars, or simply limit their flight operations. Withdrawing them from Syria altogether means that any return deployment later on would suggest the original deployment was a mistake. Therefore this is unlikely to be a temporary measure brought about by the changes in the local weather.

Syria can handle it

The SAA is in a far better shape than it was only a few months ago, and can be relied upon to finish the war on its own, particularly since Syria Express material assistance and the advisory mission that was essential to rebuilding the SAA will continue as before. One has to keep in mind that the air campaign was not intended to win the war on its own. It was intended to buy the SAA some breathing time to allow it to be re-equipped and re-trained before going over to the offensive. It has been able to do so, as shown by the steady string of battlefield victories. Therefore there is no need for the Russian air presence to continue. The counter-argument here is that the Russian air support is still very helpful, both in tangible terms and in moral, psychological terms. The Islamists clearly did not like being under the rain of Russian bombs. Now that the rain is about to dry up, the Islamists will be able to view it as a moral victory of sorts, which may lead them to redouble their efforts just when everything seemed lost.

Here, too, there are no indications that’s what is driving the decision. NATO pressure has greatly tapered off in recent weeks, Merkel is no longer calling for a no-fly zone, Erdogan is not threatening to invade, Western media are not running breathless and unsourced stories about Russian aircraft bombing hospitals. Indeed, it was apparent for several weeks already that the West has acquiesced in Russian military campaign in Syria. Which is why the “stop order” took everyone by surprise.

It may be the “stop order” is intended to pressure Assad’s team to be more flexible during the negotiations, and nothing can do that better than suspending Russian support. However, that could have been more easily demonstrated by suspending air operations for a week, until Syrian government intransigence disappeared. So this possible explanation also fails to address the fact this is a permanent withdrawal following a declaration of victory.

A deal with the Sunnis

The most tangible outcome of the “stop order” is that it pretty much ends the push on to Raqqa. It is doubtful the SAA can manage it on their own, and Putin actually seemed to suggest just recently that the “honor” of taking Raqqa should fall to Obama. Does it mean that the Sunnis have managed to struck some kind of a political deal with Assad and/or the US? Considering that the objective of the Russia-led campaign was never a total defeat of all adversaries but bringing them to the negotiating table, that possibility cannot be ruled out.  The fact that the end of the air campaign puts the future of the besieged Deir-ez-Zor, which Syrian and Russian forces cannot possibly abandon, no matter what, in doubt, also indicates that the garrison is no longer in danger of being overrun, which would in turn suggest a political deal of some sort. However, the Sunnis are hardly in a position to decide anything on their own, without asking their major regional sponsors, specifically the Saudis, who are discussed separately below.

A deal with the US

One almost certainly exists, though probably a fairly minimalistic one limited to “Assad can stay,” which in practical terms means allowing the ceasefire and the peace process to work without external attempts to undermine it. The Obama administration appears to have given up on that point, and even the US media grudgingly acknowledges the process is working. However, the concession on Russia’s part might be conceding the “race to Raqqa” to US allies, though that remains to be seen.

A deal with Europeans

It is entirely possible the EU, which has been operating under significant Turkish pressure exerted by means of herding refugees into Europe, has offered Russia unspecified concessions in return for Russia changing its policy in Syria. What these concessions might be is still unclear, but it seems like too much of a coincidence that the EU published its “five principles” for dealing with Russia, which affirm that the sanctions are a political, not an economic, tool, and that the two sides will pursue cooperation on matters of shared concern, on the same day as Vladimir Putin declared the Russian withdrawal from Syria. It is also noteworthy that the public barrage of criticism by European politicians has vanished in the last few weeks, indicating that the debate has shifted from the public arena into the diplomatic one.

A deal with the Saudis

Russia and the Saudis have an important matter to attend to: both want to limit global oil production in order to push the oil price back to $50/barrel and higher. Therefore a compromise on Syria that would accommodate the interests of both parties seems entirely plausible and even logical, since the value of the oil deal vastly outweighs the value of even the maximum victory in Syria for either of them. The Russian-Saudi rapprochement is also suggested by the fact that the Russia-Iran relations have suddenly hit a rough patch. Iran has withdrawn the IRGC from Syria, it is against the oil freeze plan pushed by Russia and Saudi Arabia and, most recently, it has suddenly declared that it cannot afford to pay for the S-300PMU air-defense weapons it ordered from Russia.  This cooling of relations suggests that the Russia-Saudi relationship is on the mend, which leaves Iran frozen out.

The bottom line is that whatever just happened in Syria was most likely influenced by factors that are not directly related to Syria, and decided in diplomatic meetings far away from Syria. For that reason, all of these relationships need to be closely watched, and anything that looks like a quid-pro-quo for the Russian “stop order” in Syria should be evaluated as possibly being part of an actual quid-pro-quo.

I read the sputnic report which suggest the stop order is mostly about personnel. I expect that they will pull out older aircraft that are more vulnerable to US made hand held rockets. (The US recently sold 600 million worth to Saudi Arabia. Expect them to be showing up in Syria) Putin does not intend to let them experiment on his older aircraft. Also the pull out might include helicopters. Then wait and see how many are given to Assad. The report stated the aircraft would remain, and Ships, thus defensive rockets as in the S400. This appears to be a move for multiple purposes including the mind work on the debate group-not a shut down.

What a mess! Is there any other style of pursuing the international policy? But, at the first look, I can’t see how Russia can profit on such a summersault of the policy in the Middle East. I believe some other significant variables are lying hidden from the public.

I really hope that this is just a chess move.If Putin really thinks he can strike deals with the AngloZionists he is not as bright as i thought he is.They are hellbent on destroying Europe,Russian,China.Why negotiate with these scum ? Why letting the toxic brew on the heater.Why not finishing it ? There maybe details that are unkown to be public and i really really hope Putin is knowing what he is doing.If Russia looses Syria the next battles will be on russian soil and russian people will die in masses.

I hadn’t fully considered the Iranian angle – sounds like it might be a factor. Iran has a lot of skin in the game so maybe Putin is pissed off they haven’t been more committed? That Davutoglu visit to Tehran the other week was a bit weird. Hard to know what they’re up to.

The first aircraft to withdraw are the Su-34… one of the most capables… days after the downing of of SAA MiG-21 ?