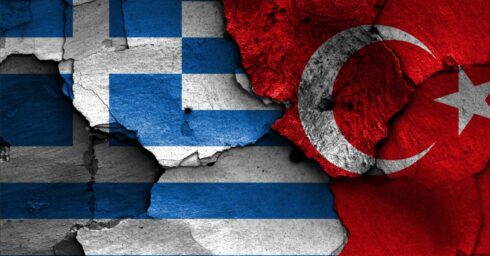 Greek-Turkish tensions today are still fueled by events that took place over 100 years ago.

Greek Prime Minister Kyriakos Mitsotakis, during the meeting of the European Peoples’ Party (EPP) in Strasbourg, threatened Turkey with European Union (EU) sanctions in case the country becomes “more aggressive.” The two countries’ quarrels over illegal migrants’ pushbacks and maritime boundary claims in the Eastern Mediterranean are well known. Less discussed about are the memory wars that are part of the conflict: last Thursday, Greek President Katerina Sakellaropoulou said Turkey “distorts the reality” pertaining to what Athens describes as the genocide of Pontic Greeks. These past events still echo amid narrative wars that hinder reconciliation.

Turkish authorities in Ankara have been criticizing Greece’s management of illegal migration, describing it as a human rights problem and Mitsotakis’ statements were a reaction. He remarked that “we are accused of alleged human rights abuses and these accusations come from a country not noted for its stellar record in respecting human rights.” Moreover, he condemned Turkish provocations in Cyprus. The issue of migrants is a hot topic in all of Europe today, as the continent is under a migration crisis.

Earlier, Mitsotakis had already claimed Athens prepared a set of sanctions to be implemented against Ankara in case it does not change its “policy towards Greece”, as he was quoted by the Greek City Times. Greek-Turkish tensions have been on the rise since the 2019 dispute between the two countries over maritime rights and jurisdiction regarding important eastern Mediterranean offshore mineral energy resources. Athen’s decision to sign a maritime delimitation agreement with Cairo angered Ankara, which claims it violates its territorial rights. Talks so far have not advanced much.

A factor that certainly does not help the dialogue is related to the politics of memory. Last week the Turkish Foreign Ministry issued a statement regretting Greek President Katerina Sakellaropoulou remarks describing the killings of Pontic Greeks (an ethnoreligious group) as a “genocide”. Such massacres, as well as expulsions, the destruction of religious monuments, forced deportations were part of a systematic persecution of the Christian Greeks of Anatolia carried out by the Ottoman Empire during World War I and its aftermath.

Sakellaropoulou did not back down from her remarks and instead claimed that “safeguarding historical memory is not just about looking at the past. It holds an important symbolic function for the present and it teaches us.” A sign that much importance is given to historical memory is the fact that last week she announced plans to create the Hall for the Global Pontian Greeks of Sourmena, an impressive $9 billion project commemorating the centennial of the arrival of Pontic Greek refugees from Turkey in the aftermath of the 1922 Greco-Turkish War.

On April 2021 Sakellaropoulou had honored the memory of the 106th anniversary of the Armenian Genocide, as it is called by most historians, also committed by the Ottoman Empire during World War I (1915) and part of the same  Ottoman persecution policies against some Christian groups within the Empire. She then described it as a “tragedy” that “crushed a thriving Christian nucleus in the southern Caucasus and almost wiped out an ancient people.”

Ankara’s position on the so-called Armenian genocide is that the deaths of Armenians took place when some of them sided with Russians, then at war with the Ottomans, and revolted against Turkish forces. It objects to describing the deaths as a “genocide” and instead promotes the view that it was a tragedy in which both sides suffered casualties.

The US House of Representatives recognizes the Turkish mass killings of Armenians as a genocide (since 2019), and so do the national legislatures of Greece, Cyprus, Armenia, Germany, Austria, the Netherland, and the Czech Republic. In December 2007 the International Association of Genocide Scholars (IAGS) passed a resolution which affirms that the Ottoman persecution of Greeks was a genocide “qualitatively similar” to the Armenian genocide.

The Turkish Ministry’s statement issued last week described Sakellaropoulou’s aforementioned remarks on Greek genocide as  “baseless claims”, and added that her allegations do not change the fact that “it was Greece that attempted to invade and occupy Anatolia, and that the Greek army committed barbaric crimes against humanity, especially against innocent civilians in the Western Anatolian region”. It also stated that Greece had to pay compensation back then for such “atrocities”.

These exchanges are quite frequent and sometimes are about events that go even farther. For example, in 2019 Turkish Foreign Ministry spokesperson Hami Aksoy said that Turkey had never forgotten the “atrocities” committed by Greeks against Turks in the course of their independence from the Ottoman Empire, and added that “we witness that Greece continues to take side with the hostile circles against Turkey and support their baseless stance and allegations”. In September last year, Turkey remembered the 1821 Tripolice massacre in Greece when thousands of Turks were killed in central Peloponnese. The Turkish Foreign Ministry stated that such atrocities can “never be forgotten”.

More than once, Ankara has proposed the creation of a joint commission of historians from both Turkey and Armenia plus international experts to examine the issues described as genocide by Armenians and Greeks (as well as most historians), but while aggressive rhetoric is employed – amid current territorial disputes – it is very unlikely any such initiative will follow.

It may appear a bit odd that events that took place over 100 years ago (or even farther back) are still the topic of heated exchanges between Greek as well as Armenian and, on the other side, Turkish authorities, but such narrative wars and the politics of memory in general should never be underestimated. Collective memory, especially regarding specific sites and historic traumas shapes both national and ethnic identity.

In the same way disagreements over World War II events damage Polish-Ukrainian relations, and in the same way different views on the role of historical figures such as Stepan Bandera have divided Ukraine, Greek-Turkish historical disputes have real and serious geopolitical implications. This is so because the way a state chooses to interpret History shapes the very manner it sees its own country and its historical mission. The 1923 Treaty of Lausanne was the peace treaty that settled the conflict between the Ottoman Empire and Greece (as well the other Allied actors). It led to the international recognition of the Turkish republic as the successor state to the Ottoman Empire and established today’s disputed Greek and Turkish borders. The truth is that many issues pertaining to the Treaty of Lausanne remain a point of contention to this very day – and the memory of past massacres plays a large role in it.

Ask the Onassis- family if there was a Greek genocide, they can testify it as well ….

The things that they did were much worse than the things we did.

Chris Gr As usual You make WILD WILD ALLEGATIONS BUT WITHOUT EVIDENCE ,SHOWS YOU AS A FOOL Remember that Turks showed you how to use water to clean your backside properly but You seem to half do it and leaving smelly

Seeing as you exist, they probably didn’t do as much as they could have.

invader Turk hordes have caused nothing but rape, murder and plunder in the ancient Greek and Armenian lands…. they would not have survived as a nation after the genocides of 1915-20 were it not for the zionists in usa working on Wilson and the bolshevik jews working for Attaturk…. indeed study the history of the donmeh in Turkey and the thessaloniki jews and you will see the crypto zionist hand and their plot to steal Palestine everywhere.

A Fellow
Reply to  Colonel Dolma

Indeed; those same Jews probably held back Turkey from joining the Axis against the Soviet Union.

Just imagine Turks disembowelling Soviet energy at Baku & shutting down Lend Lease’s primary route, with the Caucasus Range as a defensive line, all while the Reich preoccupied Stalin’s horde up to the north & west.

We could be living in a different world :)

Typical liar brainless idiot.. that mean your grandmother escape how come? why don’t you just go and jump high piss off

my paternal grandmother was left for dead in a pile of corpses in Dikranagert with the first wave of the Hamidian Massacres in 1896 but by God’s grace managed to live and make it to the USA. my maternal Grandmother was in Baghdad thanks to her fathers’s merchant business, you know where that is don’t you ignorant goat fucker…your donmeh leader has troops there TODAY against the will of the Iraqi people, there is nothing new under the sun Khazar and Donmeh united against humanity to serve your mutual dark lord satan

hey dumb fuck…. learn English then retry your pitiful attempt at criticizing what I wrote…

It may be heresy, but it gave rise to Jacob Frank who discipled Amschel Rothschild and after infilitrating Europe, UK, USA and NATO (and even China)voila! 400 years later in 2022 worldwide control of money and power masquerading as covid plandemic coming to a country near you soon in the great reset. my advice..get right with God, confess Christ as Lord and fight your sin with HIS power.

It was ethnic cleansing and a genocide, something that today’s Turks are repeating in Syria/Rojava currently. They’re also committing a genocide of the Turkish Cypriots, but this will become relevant in a few decades. Imagine they’d conquered Vienna… or have they?

Indeed, they would but in Wienerneustadt, Habsburg Emperor bought peace and signed to be pasha.

Genocide Turkish Cypriot never heard about it….NEXT RE YORGO. try something else re kalamara