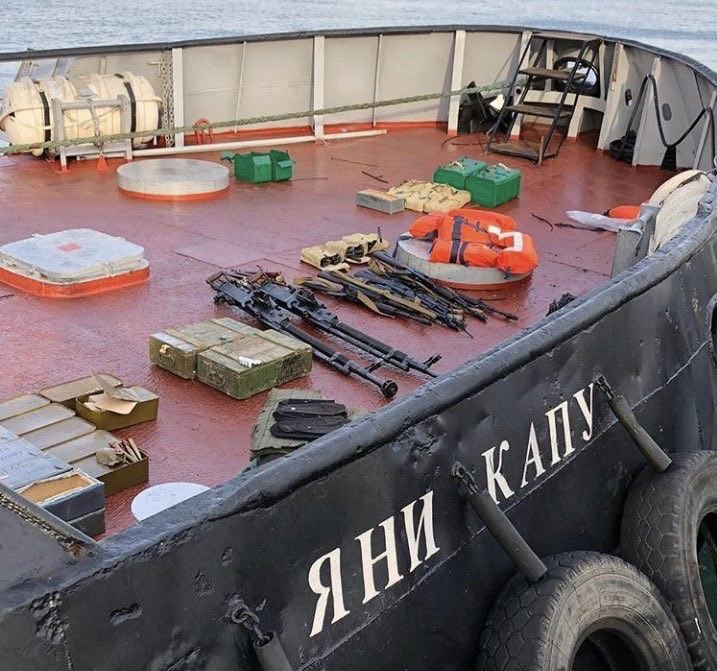 Imge: The arrested sea-tug of the Ukrainian Navy

It appears that Western experts and Ukrainian diplomats successfully “forecasted” the November 25 escalation in the Black Sea in middle November.

On November 21st, the Atlantic Council “an American think tank in the field of international affairs,” which can also be described as NATO and the US’s public relations office published a report called “Beyond Borderlands Ensuring the Sovereignty of All Nations of Eastern Europe.”

In the section dubbed “Security Assistance in the Short and Medium Terms,” the situation in the Sea of Azov is highlighted.

“Russia is currently occupying and militarizing Ukrainian Crimea, conducting a simmering, hybrid war in the Donbas, and obstructing Ukrainian shipping in the Sea of Azov.”

Furthermore, the section looked at the conflict between Russia and Georgia in 2008, claiming that Russian “peacekeeper in South Ossetia periodically move the line of demarcation farther into Georgia.”

The US and NATO provided training to both Ukraine and Georgia. And under the Donald Trump administration, the US, “at long last” provided Javelin missiles to both countries.

Furthermore, the US may and should also consult with Georgia and Ukraine for further military assistance, according to the report.

“It would also be useful for the United States and the EU to consider a proactive use of sanctions to deter further Kremlin aggression. To date, sanctions have been used to punish the Kremlin for past sins, but they also can be used to discourage further aggression.” Giving as an example, that the Kremlin “keeps taking more territory in the Donbass,” despite the ceasefire. Also, despite that even the OSCE doubts that there are signs of Russian participation in the region.

Furthermore, the report also presents a suggestion on fighting “Russian aggression and provocations” in the Sea of Azov.

“The United States and the EU should also look closely at Kremlin provocations in the Sea of Azov, and consider an appropriate response. Perhaps it should not permit Russian ships sailing from ports in the Sea of Azov to call at European and US ports, so long as Moscow is obstructing Ukrainian shipping there.”

After the Black Sea incident between Russia and Ukraine happened on November 25th, Anders Aslund, a Swedish economist who is a fellow in the Atlantic Council urged the US to send warships to the Azov Sea, in another country’s maritime territory after the Ukraine-Russian standoff in the Kerch Strait.

What is the EU going to do about the illegal Russian blockade of the international Sea of Azov? Instant action is called for! @FedericaMog @JunckerEU @eucopresident

Everything suggests that Russia slowly takes one step after the other to block the Azov Sea off from Ukraine & international shipping. The West & NATO should react sharply before it is too late. https://t.co/kZMn2XTEls

Chief foreign affairs correspondent for The Wall Street Journal, Yaroslav Trofimov tweeted that aside from the “practical risks” which might arise from US ships rushing into the kerfuffle, it would also be “illegal without Russian permission.”

Practical risks aside, it would be illegal without Russian permission according to the 2003 treaty between Russia and Ukraine that declared Azov to be “internal waters” and only guaranteed freedom of navigation for RUS and UKR military vessels. https://t.co/CjTOyfcmet https://t.co/VKxbcACZOc

Aslund in a sudden urge to increase absurdity also compared the incident to Adolf Hitler’s invasion of Poland.

Great idea to put more oil into the ?

Leonid Ragozin, formerly of Lonely Planet and BBC also pitched in his opinion on the matter and the Atlantic Council’s support of “democratic values.”

Side show? I thought Western support of Ukraine was about democratic values, not geopolitical machinations. I very genuinely did. https://t.co/eQXHNNSkS5

In addition to that, on November 17th, U.S. Secretary of State Mike Pompeo and Ukrainian Foreign Minister Pavlo Klimkin met in Washington D.C.

“Secretary Pompeo and Foreign Minister Klimkin reiterated that cooperation between the United States and Ukraine is based on common interests and shared values, including support for democracy, economic freedom and prosperity, sovereignty and territorial integrity, energy security, and respect for human rights and the rule of law.”

Furthermore, it appears that a “provocation by Russia” was expected in one way or another, as it becomes somewhat apparent from the Ukrainian Foreign Ministry’s press release.

With all of these preemptive reports and warnings against “Russian provocations” it appears that it would not be surprising if there was an attempt at a coordinated effort to cause an incident by Ukrainian President Petro Poroshenko. However, judging by US, NATO and EU reactions so far, Poroshenko may have listened to a wrong adviser from his wing, as the play appeared to be botched.

Luckily, no Ukrainian or Russian ships were sunk, and nobody lost their life. Barring some injuries, the incident failed to lead to a very large scandal, despite hyper-measures undertaken by Ukraine in the face of martial law.

It would make sense that Poroshenko expected the ships would likely be destroyed, judging by the Su-30 claims of November 27th. However, it appeared that the Russians decided to surprisingly not be as “aggressive” as expected.

To create some perspective – imagine if a Syrian warship somehow entered “Israeli territorial waters” – unsurprisingly that ship would more than likely be immediately destroyed, no questions asked. And the whirlwind in mainstream media and the rhetoric from the US, NATO and EU would most likely be much calmer than in the Ukraine-Russia scenario.

There is clearly lots going on between Russia, the UK, and the US behind the scenes.

Reminds me of the recent timing of the TV show/movie/propaganda piece (or whatever it was) showing that British Destroyer sailing towards Crimea being buzzed by 17 Russian aircraft.

It was a very clear psyop intended to further prepare the British public for a war with Russia by showing the ‘nasty’ agressive Russians swarming around all the ‘heros’ on the ship. The agressive Russian were like wasps or locusts, ready to be easily swatted like flies at a push of button by the 48 missiles on board.

The gullable brits love all that crap, and all the ‘hero’ stuff about defending democracy by the blowing the crap out countries that dont agree with them.

In my opinnion, for what little its worth, the Destroyer stunt may have been intended to justify (in the minds of British fools) the supply to Ukraine of massive amounts of British and NATO equiplment, including British ground troops by some accounts (not just trainers and advisors but fighting units apparently). Seeing all of that ‘Russian Agression’ justifies a lot in the simple minded.

I read an analysis of that incident and the reason Russia scrammbled 17 jets. It was because the Destroyer ‘lit up’ that ‘spaniel straining on leash’ targeting radar they had on the Destroyer and got firing solutions. That caused the Russians to respond, forced them to respond as the EW scanneds would not know if NATO were actually going to start something – so all birds in air, armed, and ready to use them or loose them and all that.

Dangerous game. Imagine what would have happened if the schoolboy on the radar control decided to lock onto them all just to show the camera crew what the ship was capable of……………………….

I was actually almost expecting the schoolboys and Lesbians on that ship to start shooting off a few missiles off just to show the camera crew how capable the ship was.

While I agree in general, I see it a bit differently with that comedy movie stunt (Dunkan destroyer). 1.Brits knew very well that they are far enough from Russian territorial waters and wasn’t doing anything actually dangerous – to be sure that there’s no real threat to them. Than they started acting as heros on camera. 2. I don’t buy into that nonsense (aimed at uninformed public) about their super duper radar and even less so about 17 Russian jets “swarming” them. Just listen to that commander telling the crew how well handled that “unprecedented” situation :) Nothing but a farce.

And a pre scripted farce at that by the looks on the crews faces :)

I’m affraid it didn’t work the first time and they has to refilm the scene a couple of times but that’s OK when one needs to show how they “won this one” :)

AM Hants
Reply to  Yankee Doodle

Sure you do not mean the USS Donald Cook, which was allegedly leading a Nato fleet to kick Russia out of her warm water port in Crimea.

1 hour 24 minutes, you will see what happens, when USS Donald Cook met Bastion.

>>To create some perspective – imagine if a Syrian warship somehow entered “Israeli territorial waters” – unsurprisingly that ship would more than likely be immediately destroyed, no questions asked. And the whirlwind in mainstream media and the rhetoric from the US, NATO and EU would most likely be much calmer than in the Ukraine-Russia scenario.<<

Ha! I first said that in the comments! :D

Don’t think that “West” is homogenous and consolidated.

True, we are far from that…we dont stand a chance…

A puppet is coordinating it’s moves with the master!? They just bow down and follows the order

The above Lonely Planet muppet and former BBC hack must be desperate to get a well paid job in msm, as his tweets and those of his followers are about as informed as an Ostrich with it’s head firmly planted in a sand dune. Then again that is what msm is there for.

Makes you wonder what kind and how much medication the people crying Russian aggression are ingesting. It takes an overdose of paranoia to shift ones perceptions 180 degrees.

To create some perspective – imagine if a Syrian warship somehow entered “Israeli territorial waters” – unsurprisingly that ship would more than likely be immediately destroyed, no questions asked. And the whirlwind in mainstream media and the rhetoric from the US, NATO and EU would most likely be much calmer than in the Ukraine-Russia scenario.

Reminds me of USS Liberty and the US President supporting those that took it out.

Way to ‘co-ordinate’ goofballs. May you have many more such victories!

So this is where all the russian trolls meets for lying Kremlin propaganda,interesting. Havent seen so many in one place before.

Is this really the only thing you could find?

On 19 november the EU foreign ministers the Kerch Street problems that had started a week after Russia completed the bridge in May. Ships for Ukrainian harbors are regularly held up by Russian “security” – sometimes for several days. Paying a bribe often helps. Activity in the Ukrainian harbors declined by 40-45% since the bridge was completed. https://www.euractiv.com/section/defence-and-security/news/eu-ministers-to-discuss-militarisation-of-azov-sea/