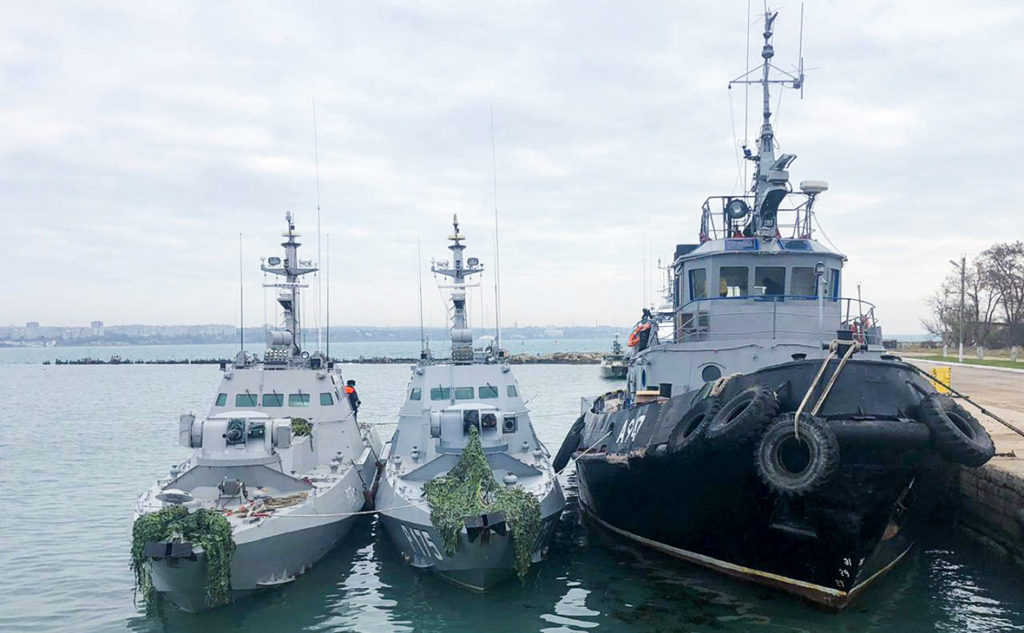 The Russian Federal Security Service (FSB) said on November 26 that it has questioned Ukrainian servicemen who were detained following the maritime incident in the Kerch Strait.

The FSB released a video footage of the questioning session with:

The Ukrainian servicemen confirmed that they were action upon a direct order from their command and the November 25 maritime incident was a pre-planned provocation.

“Radio requests [from Russian border guards] were deliberately ignored. There were firearms and machine guns with munitions onboard. I was aware that these were provocative actions,” Lesovoy stated adding that the formal goal was to reach Mariupol [the Sea of Azov] from Odessa [the Black Sea] through Kerch Strait.

The Urainian intelligence officer, Drach, confirmed that the Russian side was working to prevent an armed clash in the area.

However, the Ukrainian naval group was ignoring the warnings.

“We continued to move. We were contacted by Russian ships which warned us they would open fire if we did not stop, The commander stopped the boat, and we were detained. That’s all,” Tsybizov said.

The Saker released a full translation of the testimonies (source):

I am Vladimir Vladimirovich Lesovoy, commander of military unit 1828. Since November 22, 2018 I have been in the structure of the group of ships of the Naval Forces of Ukraine, I lead the tug “Yana Kapa” and the boats “Nikopol” and “Berdyansk”. I made a passage through the Kerch Strait. After crossing the state borders of the Russian Federation I visually watched the ships of the Border Service of the FSB of the Russian Federation and I consciously ignored their requests to stop over the radio station. At the time of the passage small arms and machine guns with ammunition were onboard. I was aware that the actions of the Ukrainian ships in the Kerch Strait had a provocative character. I was following orders and planned to carry out the transfer of ships from the port of Odessa to the port of Mariupol.

I am Sergey Andreevich Tsybizov. On Friday morning we left Odessa at 08:00 and headed to Berdyansk through the Kerch Strait. When we approached the Kerch Strait, we entered the waters of Russia, after which we were given the command to stop and wait for further orders. Before fire was opened, two green flares could be seen. We continued to move on “Nikopol” and then Russian ships contacted us. Our commander decided to stop the boat. We were taken off the boat and that’s all.

The FSB further revealed that there were two Ukrainian intelligence officers were coordinating the provocation on board of the ships.

“The Ukrainian warships entered Russia’s territorial waters at a direct order from the Kiev authorities. The warships trespassed into the Russian territorial water that had enjoyed this status even before Crimea’s reunification with Russia. The provocation was coordinated by two Ukrainian Security Service officers who were aboard the Ukrainian ships,” the FSB said in a statement.

Russia-Ukraine Black Sea Military Crisis: On The Brink Of War

Pre-planned means ‘before the plan’, not the ‘plan before’.

pre-planned means that it was intended as a provocation since the start – the mission was designed to be a provocation.

“Pre” is an affix that means “before”, this gig was “planned”; you can’t post-plan anything.

I’m not Jewish, you antisemite cunt.

the main reason behind this seems to be to impose martial law on Ukraine by the Porkos administration.

Approved in vote today: “Martial law will be imposed for 30 days in only 10 of Ukraine’s 27 regions – those bordering Russia, Belarus and Moldova’s pro-Moscow breakaway republic of Trans-Dniester.” Porkos is scheming here, because of elections approaching?

are those by any chance the regions where Porko’s got the lowest ratings?

Porko thinks that he’s smarter than everyone – he hoped to get multiple benefits: Martial law = no elections in march that he has no chance to win plus massive support from the west. It seems that he missed both – matial law is implemented only partially and west doesnt seem too eager to spend more money and see Porky for what he is – used condom.

LOL ouchhhhh, in the west its beimg reported as all of ukraine under martial law.

Dear god our reporters are bas.

you don’t need to impose martial law in lvov to screw up a vote against the porkery.

Quote from article “The warships trespassed into the Russian territorial water that had enjoyed this status even before Crimea’s reunification with Russia. ”

Funny this is mentionned, in the west the morning propaganda broadcast clearly said this happened in waters around crimea that are “ukrainian”. I didnt beleive it then….now i have confirmation…Thanks South Front your great!!!

Not a word about aleppo cw attack on the news….what a surprise.

Not a word on the under-water SADM mine either (a low-yield nuclear remotely-detonated under-water mine which was allegedly to be deployed by the Ukrainians against high-value Russian bridge either)! Did notice that main ship (the one carrying the 2 Ukranian spooks -) was a mine-sweeper , which means that it is also a mine-layer .

Why wont Rusia just show us the picture of the mine or have the Ukronazi spooks tells us about it on camera? A pic tells a thousand words.

Don’t know , something must be going on with it (might be studying it – might be one of theirs missing , don’t know)!

Could be friend. Who knows?

If the boats did carry that device, it will be revealed in good time. But how likely is it that they would have carried a SADM? If they had, why would they loiter, cavort and attract attention in the Russian waters? A boat that was supposed to deploy a mine surreptitiously would have been quiet, well-behaved, most likely civilian, and moving with a proper permit. Disagree?

I also heard that story…if its true(not really feeling it) this is a war starter.

I dont think its true, if it is…god help us all.

Interesting Established Media left that out.

That is a good point.

“The warships trespassed into the Russian territorial water that had enjoyed this status even before Crimea’s reunification with Russia.”

Come on guys, read between the lines! These video interviews are carrying a message to the UK and US!

Chances are the UK Mil is sh-t-ng themselves that a UK SF or intel guy is going to appear (or already has to the trained eye!) on screen as a warning that your card in this game has been played and lost!

Look at the designations of the guys they have already pulled in front of the camera! heck, one is an Intel Officer for crying out loud.

(Is it just me or are the guys showing signs of being in contact with something a little hot, shall we say, for a little longer than was perhaps prudent, or else has have been smoking a few leaves, lol).

The Ukrainians will be brought to heal now by thier handlers in the UK and US, or should be otherwise men with Yorkshire or New York accents will appear on screen!

The UK and US SF and Intel guys caught on that tug will be given a nice helicopter ride out, just like in Syria when the Russians pick them up there too when they are caught running from the SAA after ‘advising’ moderate head-choppers.

Maybe probably true. But jesus having people make video statements when they have no power makes one look like a kidnapper.

But these sailors are only being detained for questions. And it’s only been 1 day! If they wish to talk, that is their choice. :)

Let’s discuss the subject of optics now, Sir Isaac Newton. Really. For some monsters, the very existence of this bridge is offensive and bad optics to them. What to speak of the gall to pull off this operation to begin with. People must be high out of their minds on drugs. No other explanation anymore. (speaking to the minds behind this bs from UA, NATO, UK)

I thinks it antidepressants that make people heedless of consequences.

I suggest you try and trespass Russian border illigally while carrying weapons. Than you tell us how it is like.

First hand knowledge is of course the best…but im not that eager to find out!

Are you ok? They perpetrated an act of war on another country. They should get a military tribunal and lots of years in jail.

We have 3 Ukrainian service men who seem relaxed enough while giving video statements about the events which happened. According to their statements it appears they were under duress from their superiors to carry out this incursion into Russian territorial water, cant see any of them ever heading back to the Ukraine as the consequences would be fatal. My initial belief was that this was a coordinated NATO maneuver to spark an international incident and maybe it was. However, it is beginning to play out more prosaically with ‘Porkos’, trying to instigate the project off his own bat with a half arsed plan. “Fail to prepare, prepare to fail”. McCain is dead and buried, expect Porkos shenanigans to culminate with his political burial sooner than expected.

Why is Russian attempting to control water that doesn’t legally belong to them?

Who does it belong to, British Empire?

It is as much Ukrainian as Russian. So why does Russia think it can block Ukraine?

There is no Ukraine.

Hahaha. There is no USSR because Russians are idiots

Quote from article, “The warships trespassed into the Russian territorial water that had enjoyed this status even before Crimea’s reunification with Russia.”

Hahahahahahaha.. how can they prive it since they are jamming GPS. The KGB is ingenious. They can assert, and they prevented GPS logs

Now Russia’s Putin tortures prisoners to force a confession. Absolutely no regard for international law. What goes around will come around.

You have no creativity. Put some effort into your spiel at least. Lame. (right, because we know morale is at an all time high across the UA military personnel.)

That is the best you can do is call me names. China owns Russia and will move in for even more control. Best get out before Chinese sell your organs to monetize you.

Sounds exciting. How does China own Russia? Lol first I’ve heard of it. I live in the USSA.

“The warships trespassed into the Russian territorial water that had enjoyed this status even before Crimea’s reunification with Russia.”

If this is true, then it’s clearly a very stupid thing for the Ukrainians to do. Because it amounts to an invasion of Russia to create trouble.