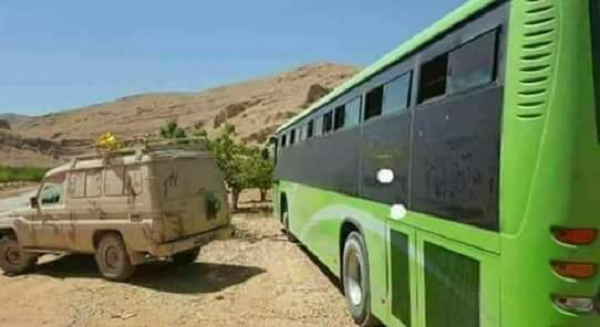 Deputy Mayor of Arsal, Ms. Rima Karnabi, announced that 200 fighters of Hay’at Tahrir al-Sham (HTS), including HTS commander in Jorud Arsal Abu Malek al-Tali will be evacuated to the Syrian province of Idlib.

“I don’t have specific details, but I can say that an excellent agreement has been reached at the moment… I heard that they had gathered their belongings in Wadi Hamid (where the Syrian refugee camp is located). According to the agreement, all militants must leave Arsal mountain area,” Karnabi said to RIA Novosti.

According to Karnabi, the agreement was reached following the negotiations between Hezbollah and HTS. Pro-Syrian government sources published photos of Syrian buses, claiming that they are currently on the Syrian-Lebanese border, waiting for the preparations for the evacuation to complete to enter Jorud Arsal and then transfer the fighters to Idlib province.

Within six days Hezbollah and the Syrian Arab Army liberated the entire Jorud Flitah. Hezbollah also managed to liberate 90 square km out of 100 square km in Jorud Arsal area inside Lebanon, which had been controlled by HTS since 2014. It’s believed that more than 100 HTS fighters were killed during the battle.

I always laugh when I think of these frothing Sunni Wahhabi extremists and how they’re actually the play-things of Zionists and American psycho-billionaires.

Imagine if they actually knew that all their beliefs are just a bunch of fluff to motivate them for no reason beyond profits and the goals of Zionism?

Soon the Syrian government coalition will be on the Golan border with a conventional and nuclear military force superior to Israel and 100 plus violated UN and other resolutions in hand. That the entire planet supports, including most Americans, that the Jew baby rapers are going to have to start taking seriously. And it will be the Zio trash and their Jew cult slaves and servants in the US legislature against humanity.