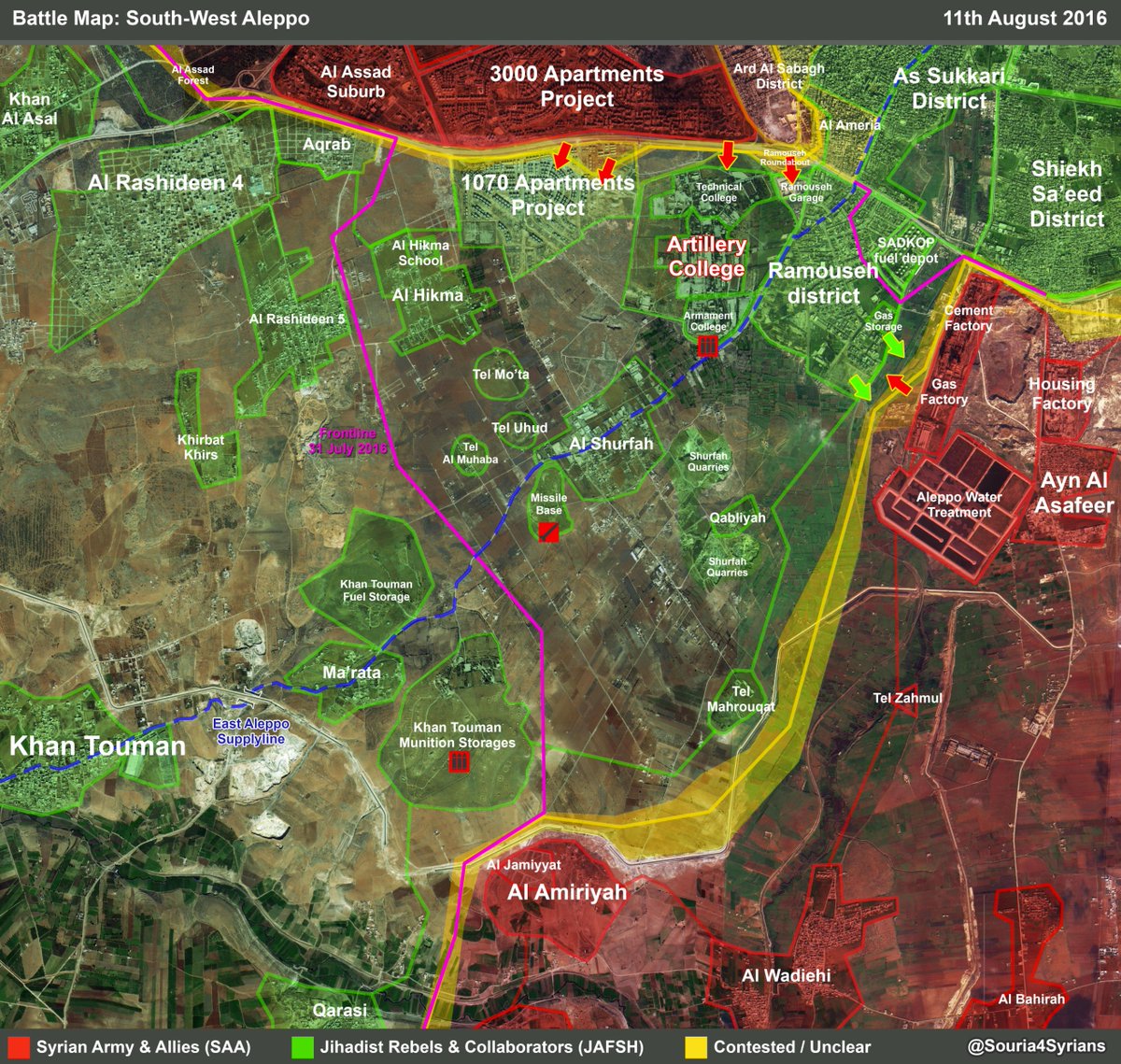 On August 11, the Syrian army and loyal militias launched an operation in order to take control of Jaish al-Fatah’s corridor to eastern Aleppo. The Ramouseh Roundabout is one of the most important areas that pro-government forces need to seize to do this.

Jaish al-Fatah can not supply its allied militants in eastern Aleppo because the group does not controll this strategic roundabout and the Ramouseh Garage. The road on Khan Touman that had been used by the group for some photo and video evidences of the “opened” corridor is on the scene of fighting with the Syrian government forces. This is why even pro-militant sources confirm that the “opposition” is not able to supply eastern Aleppo on a constant basis. Furthermore, they were not able to push the pro-government forces from the controlled areas in the 1070 Apartment Project, the 3000 Apartment Project and the Cement Plant. Control of these areas allows the Syrian artillery to shell militant convoys heading to eastern Aleppo. 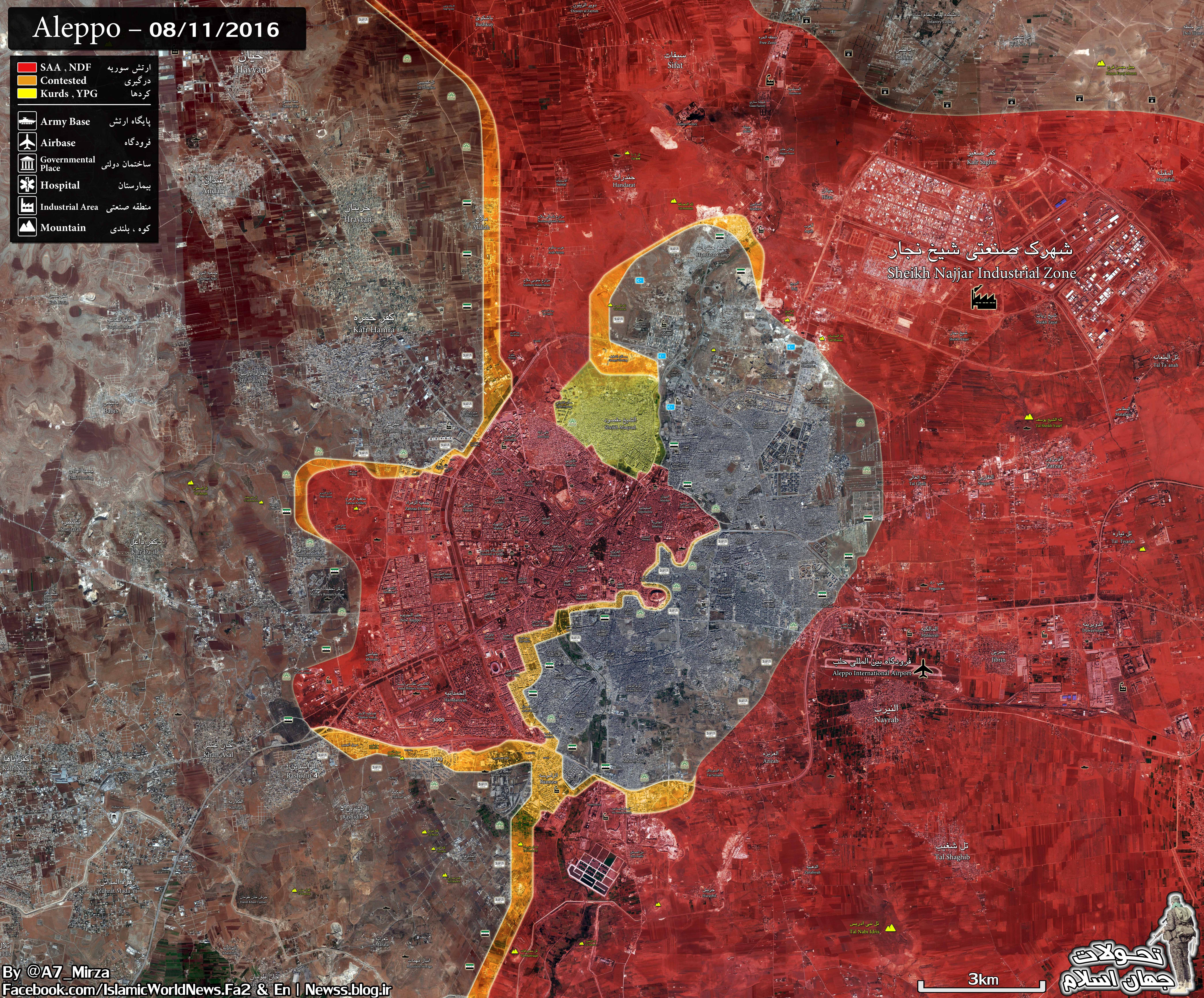 Now, let’s look closer at the clashes for the Ramouseh Roundabout.

The Syrian army is deploying north of the roundabout and preparing to advance: 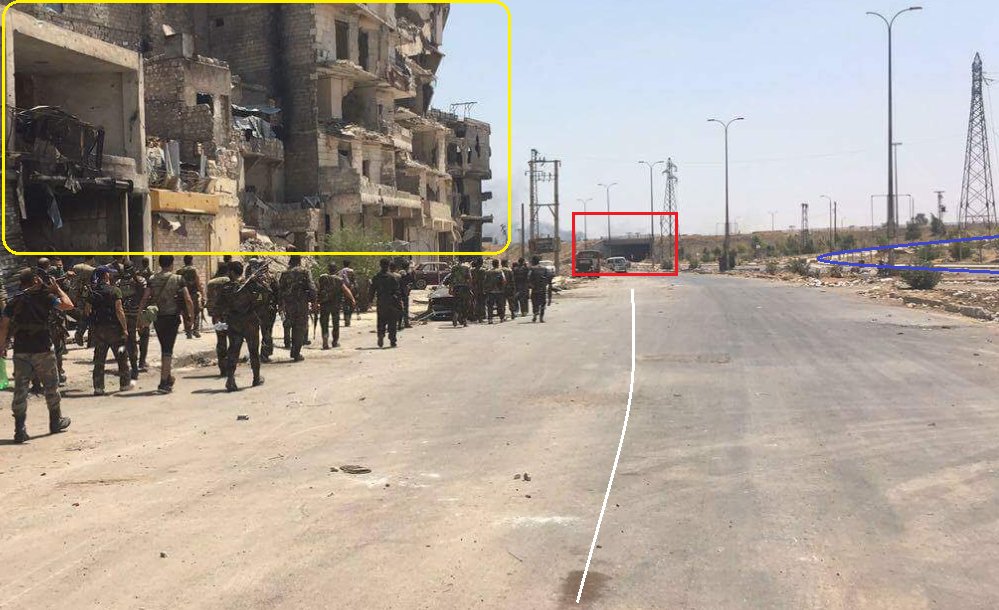 Location of the Syrian troops (yellow) and the Ramouseh Roundabout (blue): 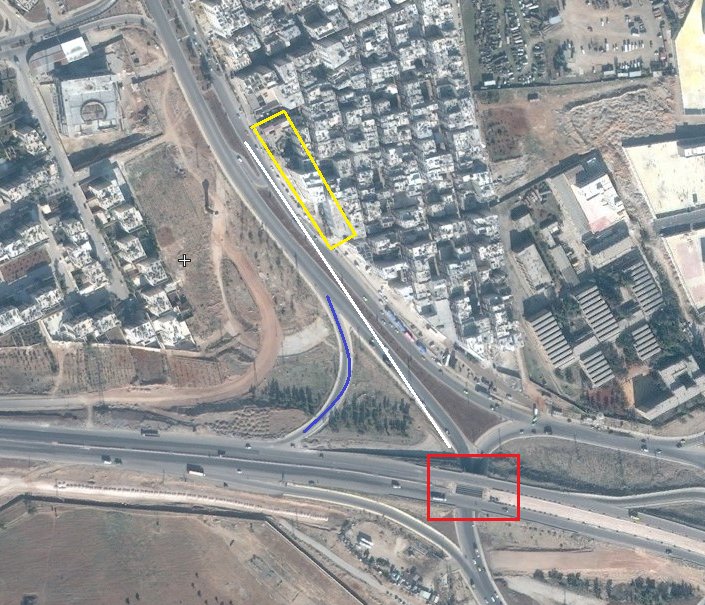 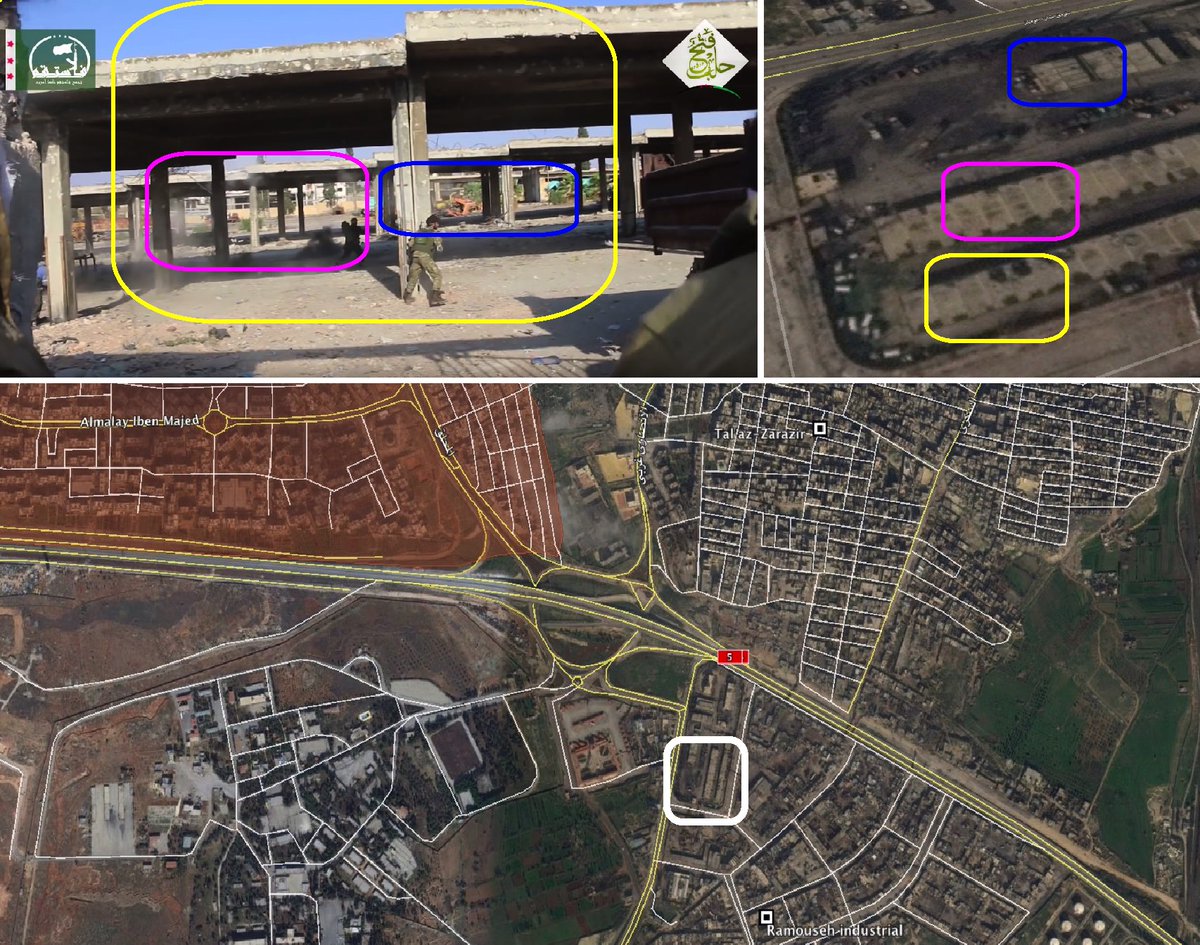 This clearly shows that Jaish al-Fatah’s corridor to eastern Aleppo is a disputed area between the Syrian government and its opponents. This is why the UN is pushing an idea of 48 hour ceasefire. Only this move will allow the militant operation room to re-group and re-supply its units.

Yeah, map and everything, we know the details of the offensive. But … the 11th of August is ending, and there are no confirmed news about the outcome. So I guess it’s not going so well…

They not going to recapture as easily as the jihadist because the SAA did leave the Artillery base pretty quickly.It may take a day or two maybe even more.

You’re right, I was just wondering why every single bombing is quickly reported, instead news about this decisive operation are only speculation, nothing certain. I just hope Syrian Army has ordered some sort of “radio silence” to prevent the leakage of important details.

The SAA is not in a hurry, the jihadis are already committed to their positions, and they are waiting on reinforcements and resupply, they are being attrited from the air, and artillery attacks, as time goes on, with their supply lines being cut off or significantly interdicted their positions are going to slowly collapse.

They also need to do that in about a week at most because even if they succeed in pushing the jihadist back there is still the city to capture and that is going to take some time too.

I do not think they want to go in the east side of Aleppo to liberate it, maintaining a stranglehold and cutting off all supply and cutting off their communications will render the Allepo jihadis useless. The primary effort is to allow civilians to get out of there, as many that want to get out. Right now all the jihadis trying to break the siege, even though they theoretically broke it, they cannot do much assisting their friends in the city.

kill russian and assad’s bastards, kill them all

and suck on this dick

I believe that the 3-hour ceasefire has been set up to stop the scaremongering about a “humanitarian disaster” and whatnot.

From Han Touman to east Aleppo there are less then 10 km. Just 1 hour of a ceasefire would be more then enough to send supplies of ammunition and armaments as much as you want.

It’s the lighting… the sun is at zenith, so no treachery shadows to lurk around in – best conditions for air surveillance. 48 hours include also 2 dark periods (night) and everything in between, enough time to give the “moderate” terrorists, and their sponsors all kind of bad ideas…

That would make some sense, but only if the 3 h ceasefire isn’t firm ceasefire, but only allowing for food supplies, and bombing any try for delivering ammunition, armament and any other military supply.

But there is a problem with that too, because you can’t know what is inside a truck!

Thx for these useful news. Let’s hope next that Aleppo will be cleaned of this low life. Thx Russia, Syrian army, Iran and all milicias, and courageous resistances that stand against this barbaric Nosra.

august 11 ended with no gains to SAA