U.S. allies the United Arab Emirates, Egypt and Israel have been backing the “rogue” government of CIA-asset Khalifa Haftar, which controls Libya’s east as well as many of the country’s most important and lucrative oil fields and ports.

The UN-recognized government of Libya — officially known as the Government of National Accord (GNA) — could be in its final days, as recent in-fighting within the GNA has dramatically escalated since it began last week, plunging the country’s capital into chaos. On Saturday, over 20 rockets targeting residential areas rained down on the center of Tripoli; a day later, one of the largest prison breaks in Libyan history occurred, resulting in the escape of an estimated 400 detainees, some of whom are believed to have joined the clashes taking place throughout the streets of the capital.

Since last week, the fighting in Tripoli has expanded and intensified — killing at least 40, including an estimated 20 civilians. Local authorities have reported that over 100 have been wounded. The fightingprompted the President’s Council of the GNA to declare a state of emergency last Monday, which still remains in effect.

Several foreign powers, including those that led the NATO intervention that overthrew Libya’s government in 2011, have condemned the growing violence. A joint statement delivered by the U.S., U.K., France and Italy on Monday condemned the fighting as part of a “not acceptable” effort “to weaken the legitimate Libyan authorities and hinder the ongoing political process,” adding that “those who seek to undermine stability, in Tripoli or elsewhere in Libya [will] be made accountable for it.”

However, these powers failed to acknowledge their part in fomenting the current crisis via their role in “undermining stability” in Libya by helping to overthrow the country’s long-time ruler Muammar Gaddafi. Since Gaddafi was overthrown and murdered by NATO-backed “moderate rebels,” the country – which once boasted the highest standard of living in all of Africa – has become a terrorist breeding ground that still lacks a functional central government, allowing everything from an illegal arms-trade to the public trading of slaves to flourish.

While the West publicly condemns the in-fighting within the UN-recognized government, several other countries stand to gain from chaos within the portion of the country controlled by the GNA.

Indeed, U.S. allies in the region — such as the United Arab Emirates, Egypt and Israel — have been backingthe “rogue” government of Khalifa Haftar, which controls Libya’s east as well as many of the country’s most important and lucrative oil fields and ports. Haftar has long sought to depose the GNA and cement his control over the country, and increased in-fighting in GNA-controlled territory clearly poses an opportunity to Haftar’s government, which recently consolidated control over the entire eastern portion of Libya.

Though it nominally backs the GNA, the U.S. has ties to Haftar, who has been an asset of the CIA for decadesand was even paid and armed by the CIA to lead a failed coup against Gaddafi in the late 1980s. Furthermore, an increase in Haftar’s control would help serve the Trump administration’s ambition to establish a “permanent military presence” in Libya. Last year, the Trump administration’s plans to establish a more permanent presence in the country notably called for “closer cooperation and intelligence sharing with Haftar,” even though his government is not recognized internationally.

In addition to the U.S., France may also have ulterior motives, despite its public backing of the GNA, as the French president hosted Haftar last year. Haftar was most recently in France this past April.

Wait… we’re backing the Libyan rebel forces who are trying to take control of their country back from the internationally recognized fake government in Tripoli? That’s what the f’king HOUTHIS are trying to do – shouldn’t we be supporting them? And why is anyone in Libya still fighting? Libyans are FREE today – the butcher Gaddafi was executed. FUKUS said this would fix everything for the Libyans. Remember, it was a humanitarian intervention by NATO. Gaddafi was going to attack al Qaeda ‘citizens’ in Benghazi – NATO had to stop the slaughter. 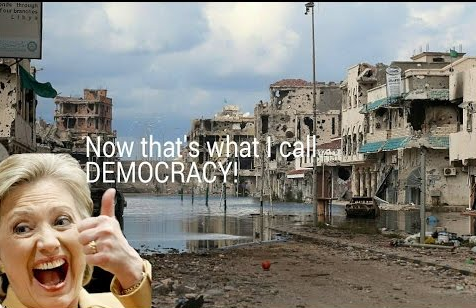 There about 4 sides that matter in this war in Libya now. And 3 of them are either current or former NATO/Israeli assets (fake government in Tripoli, fake government in Genghazi, AQ+ISIS jihadists) and some smaller random disorganized gangs of mercenaries or tribes.

BUT the 4th faction are the Green Rebels, the former loyalists of Muamar al Gaddafi, soldiers of the new Jamahiriyah who are slowly getting stronger and will have to take their country back from the imperialist’s minions!
https://www.youtube.com/watch?v=MiLRloycmhg

In Italy all speak only of “France wuold steal our oil” :D (Being Tripoli government close allied of Italy :D) Whitout knowing who (Haftar) control most of oil by years :D

So , had read that Russia supported Haftar as well ? Anyone have that info.
Who does Gaddafi’s son support ? He would seem to be the one able to reunite Libya.