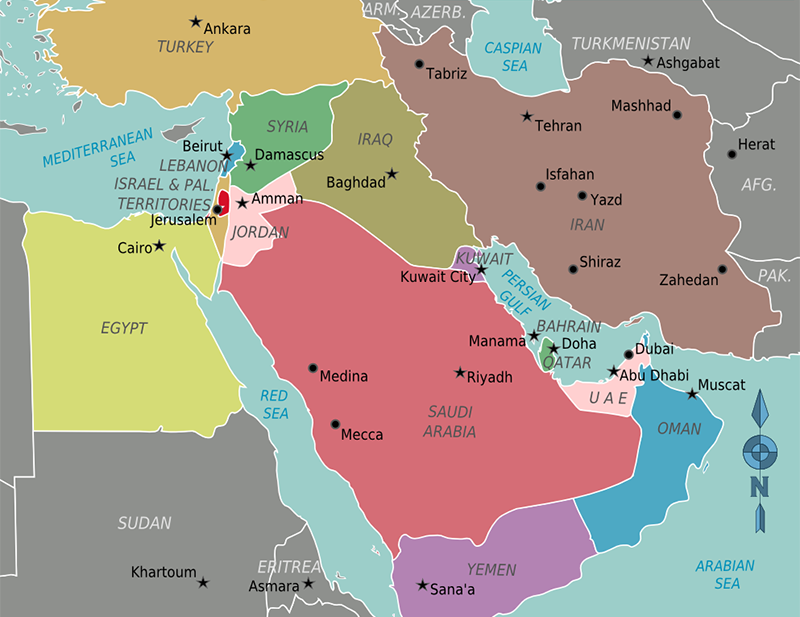 Middle East is burning, it is in flames. Who doesn’t see this must be blind. The one who doesn’t want to see this is the one who sets up the fire. Igniting the fire intentionally or fueling it up with the lack of interest in the region. Those who are setting up these flames can continue unhindered doing so without any problems. Yemen, Iraq, Syria, Somalia, Libya, Palestine, Sinai, Afghanistan all of them visibly burn while the war is still ongoing.

Turkey, Saudi Arabia and the Gulf monarchies have caught fire and started to rot from the inside while the disease of Wahhabism takes on more and more perverse form. The status quo is becoming untenable and must act urgently. Rats are spreading in all directions and there is a risk that before the Daesh (ISIS/ISIL) is totally destroyed those rats from Europe and the Caucasus could return home. In order to put an end to the problem we must be well aware of its consequences and hit the strongest on its main cause.

“Abu Ali” (Vladimir Putin) understands this very well, so he decided to slowly but surely with a well-prepared tactics, deratize the entire Middle East.

The cause of the problem is located on the Arabian Peninsula. Saudi Arabia, the cradle of Wahhabism and its allies Qatar, Kuwait and the United Arab Emirates is funding and supporting these rats in every segment. All the way from supplying the weapons to them, to the logistics and generous financial aid.

Turkey, which buys oil from Daesh, financing them, and at the same time treating in Turkish hospitals the terrorists, is a part of the same Wahhabis team squad. It is true that not all the Turkish people are the same but the political elites in Turkey now impose such a policy, that even the father of modern Turkey, Mustafa Kemal Ataturk is now turning around in his grave.

Putin began to publicly amount the evidence of their trade with oil and generous financing. To completely deratize the Middle East, it is the Saudi Arabia that needs to be hit the most. Saudis who are financing the Wahhabis and the invasion of Yemen itself spent unbelievable five hundred billion dollars this year. With low oil prices SA started to crumble from within.

If the West would care about democracy then Saudi Arabia should be on top of the list of countries that need to be introduced to democracy and right after them the other Gulf monarchies should follow.

Remember every time you go to Dubai or Istanbul as a tourist, you finance terrorism. Putin will most certainly use the Kurds to shake Turkey up and destroy Erdogan. Disintegration of Turkey as a full state is quite possible. After the public announcement of the main sponsors of Daesh and other terrorist groups, it is certain that in the near time the Gulf monarchies will no longer be monarchies. They would accept a true democracy and their monarchs could be disinherited.

But before this happens there will be full deratization of Syria and Iraq which will be done with a demonstration of force and power of Russia’s allies, Iran, Syria, Hezbollah and Iraq. They will go to every city, every village, every town in every hole in which those rats are hiding until they had killed every last one of them.

Russia has now quite sufficient military presence in the Middle East and with the help of their allies they will definitely clean it up entirely. It will certainly be hard work, but in the end successful. Putin once again proved to be a world leader, and the only question is what Europe is doing and why doesn’t it help?

Europe acts like an obedient dog of a rotten America which doesn’t not know what to do itself. Europe quite honestly doesn’t know what is going on there, who are good and who are bad. It blindly follows the instructions of its evil younger but stronger brother and thinks that it is making good to itself and the world.

Events in Paris showed just the opposite, but we are here to learn from our own mistakes, so hopefully one day the people of Europe will come to their senses, shut down the TV and stop reading mainstream newspapers.

It would be good to look up to Viktor Orban and the Hungarian people. Not in terms of the barbwire, but the mentality because they are their own and not under someone else’s control. Even the EU flag is not hanging in front of their parliament. Everyone takes their own battle so they say, but then why the EU is fighting the same battle for America instead for themselves.

America will certainly not hunt all the rats from the streets of Europe when they return home. The only thing left is to hope that Putin gets rid of them before they return, but Europe better offers him help. Because it is well known that Europe and Russia have always been friends and allies. Remember just who saved Europe from Napoleon and Hitler. Mother Russia did.