On November 3rd, the Milan Court of Appeal released from custody Vitalii Markiv, the former Ukrainian deputy commander of the General Serhiy Kulchytsky Battalion of the National Guard of Ukraine.

He was convicted by an Italian court to 24 years of imprisonment for allegedly directing a mortar fire that killed Russian journalist Andrei Mironov and Italian photojournalist Andrea Rocchelli near the city of Sloviansk.

His conviction was overturned, and he was exonerated.

Ukrainian Deputy Interior Minister Anton Gerashchenko said that by the decision of the Milan Court of Appeal, Markiv was acquitted of all charges.

“Markiv is free and returns to Ukraine,” the official wrote.

This information was also confirmed by the authorized representative of the Verkhovna Rada for human rights Lyudmila Denisova.

“The Milan Court of Appeal issued an acquittal in the case of our hero, fully acquitting him,” the Ombudsman wrote.

Initially, Markiv was detained in Italy on June 30, 2017 on suspicion of the murder of Italian photojournalist Andy Rocchelli near Slavyansk in May 2014.

On May 17, 2019, the Minister of Internal Affairs of Ukraine Arsen Avakov arrived in Italy to participate in the trial in the case of a serviceman. However, this did not help Markiv, and the court sentenced him to 24 years in prison. It is worth noting that the National Guard has dual citizenship – Italian and Ukrainian, so Italy may not extradite a convicted Ukrainian.

Nevertheless, at the beginning of this year, the Ukrainian Parliament issued a statement in which it condemned the Italian side for an unfair trial against Markiv.

The Italian court was supposed to consider the appeal of Ukraine in the case of the National Guard in the spring of 2020, however, due to the coronavirus and quarantine, the process was actually blocked.

Below are photographs from Markiv’s telephone, it shows a person being prepared to be burned alive. And another photo of an individual, clearly being taken on a little tourist trip. Another example of ‘fond memories’ kept by Markiv in his photographs: The very same ‘patriots of Ukraine’ attack members and supporters of opposition parties, independent journalists and participate in the government-backed campaign against the canonical Ukrainian Orthodox Church (Moscow Patriarchate). All of these crimes are blatantly ‘justified’ by their ‘patriotism’ and the need to ‘defend Ukraine’ from enemies.

Meanwhile, to show how things are run in Ukraine, Ukrainian President Volodymyr Zelensky is threatening judges of the constitutional court and try to manipulate the court itself.

The President himself confirmed this on air at Ukraine’s ICTV TV channel. He said that he threatened Alexander Tupitsky, the head of the constitutional court, and even his family.

On November 3rd, the Constitutional Court will continue to consider one of the most scandalous issues in recent years – regarding the constitutionality of a number of provisions of the law “On ensuring the functioning of the Ukrainian language as the state language”, better known as the law on total Ukrainianization.

Actually, the appearance of this issue on the agenda led to serious battles between supporters of two opposite versions of the relative future decision of the Constitutional Court on this law.

Finally, still others said that the question would be postponed until quieter times. Moreover, yesterday the Constitutional Court has already postponed consideration of another “explosive” issue – on the ground.

As a result, the supporters of the third point of view turned out to be right – the press service of the Constitutional Court reported on Tuesday that the court considered the issue of the language, but did not make a decision.

There were also rumors that the Office of the President, which is unable to collect votes for the resignation of the KSU, is trying to force them to write letters of resignation in an amicable way or in a bad way. The option of revoking the decrees on the appointment of judges is also being considered, as well as the adoption of a law to increase the quota for making decisions to 17 people, which will completely block the work of the court (now there are 15 people in it and three vacancies are not filled).

President of Ukraine Volodymyr Zelenskyy introduced draft law No. 4288 to the Verkhovna Rada, which proposes to deprive judges of the Constitutional Court of Ukraine of their powers and restore the law on declaration that they had canceled.

As reported on the parliament’s website, the presidential draft “law on restoring public confidence in constitutional proceedings” was registered in the parliament as urgent on October 29.

There is also the text of the document and an explanatory note to it. The legislative initiative of the president is designed to ensure “observance of the constitutional order in Ukraine” and to prevent “usurpation of power by the judges of the Constitutional Court of Ukraine.”

In addition, the bill provides for the termination of the powers of all acting judges of the Constitutional Court. He also proposes to declare null and void the recent court decision on the recognition of some provisions of the law “On the prevention of corruption” unconstitutional.

“When making the decision of the Constitutional Court… no proper justification was given for the said decision. In addition, such a decision significantly goes beyond the constitutional submission, according to which the relevant provisions were declared unconstitutional,” the explanatory note reads.

Zelensky even personally came to a meeting of the Servant of the People faction – that which holds the majority in Parliament. But, regardless, it still lacked votes.

Last week, the judges of the Constitutional Court made an extremely resonant decision – they recognized a number of provisions of the law on the prevention of corruption as inconsistent with the Constitution.

“Strana” analyzed in detail that this decision in practice means the collapse of the system of total control of politicians and officials, which the West built after the Maidan with the help of electronic declaration of income and expenses. Anyone who submitted a declaration could turn out to be a potential criminal in the eyes of the anti-corruption vertical. After all, it was always possible to find violations in e-declarations and initiate a case by hanging officials on a hook.

Having recognized the provisions of the relevant law as unconstitutional, the judges of the Constitutional Court broke this external control lever.

This was immediately followed by a reaction from the entire ‘anti-corruption lobby’ (that in fact works to exploit corruiption for own interests), sponsored by Western embassies and various grant organizations.

In short, the Constitutional Court denounced a part of provisions/laws accepted after the 2014 coup as non-constitutional (no surprise) and now the presidential administration is, once again, violating the constitution to pressure the court. This is yet another example of the young European democracy, and how practices that are typical for some “backward” countries are frequently applied, with impunity.

Its a shame really that the italian judiciary was influenced by politics especially by ukro nazi crazies.

What a mess we have created in ukraine.

As I said Ukropisstan is the butthole of Europe or maybe that of planet Earth.
Im only not saying The Universe because we havent invented the Warp drive yet…

They said that the land of madmen would be Europeanized, on the contrary Europe is becoming Ukrainian, do not forget Paperclips, fascism has never died it has only been internationalized, the €U itself is nothing more than the revival of the Nazi finance minister’s plan Funk.

Italian judiciary is completely antifa .
They are all leftist . Thay ate fascism and democracy . Never respect the law and Costitution .It’ s a communist clan .
Leftist parties partecipate in demostrations against Siria walking in public streets side with terrorists leaders of Isis and al-quaeda .
During summer public party of leftist parties , antifa and lgbt they publicly collect money to send to Azov battalion and other nazi groups .
Leftist juornalists , media and politicians were happy for the arrest of Assange .
Italian judiciary is an istrument of leftist antifascists .
They protect antifa and clandestines , black and islamist that kill italians .
They never condemn clandestines when rape italuan girls because ” we cannot pretend that men coming from abroad know that in Italy you cannot rape ( and kill ) women ” : so everybody black or islamist that rape women never go to prison .
When they kill italians they say that the killers don’ t deserve to go to prison because ” they were stressed becouse of the dangerous trip through the sea to arrive in Italy or because of political actions of Salvini to protect italian borders ” .
You don’ t know what antifascist hell is Italy now . 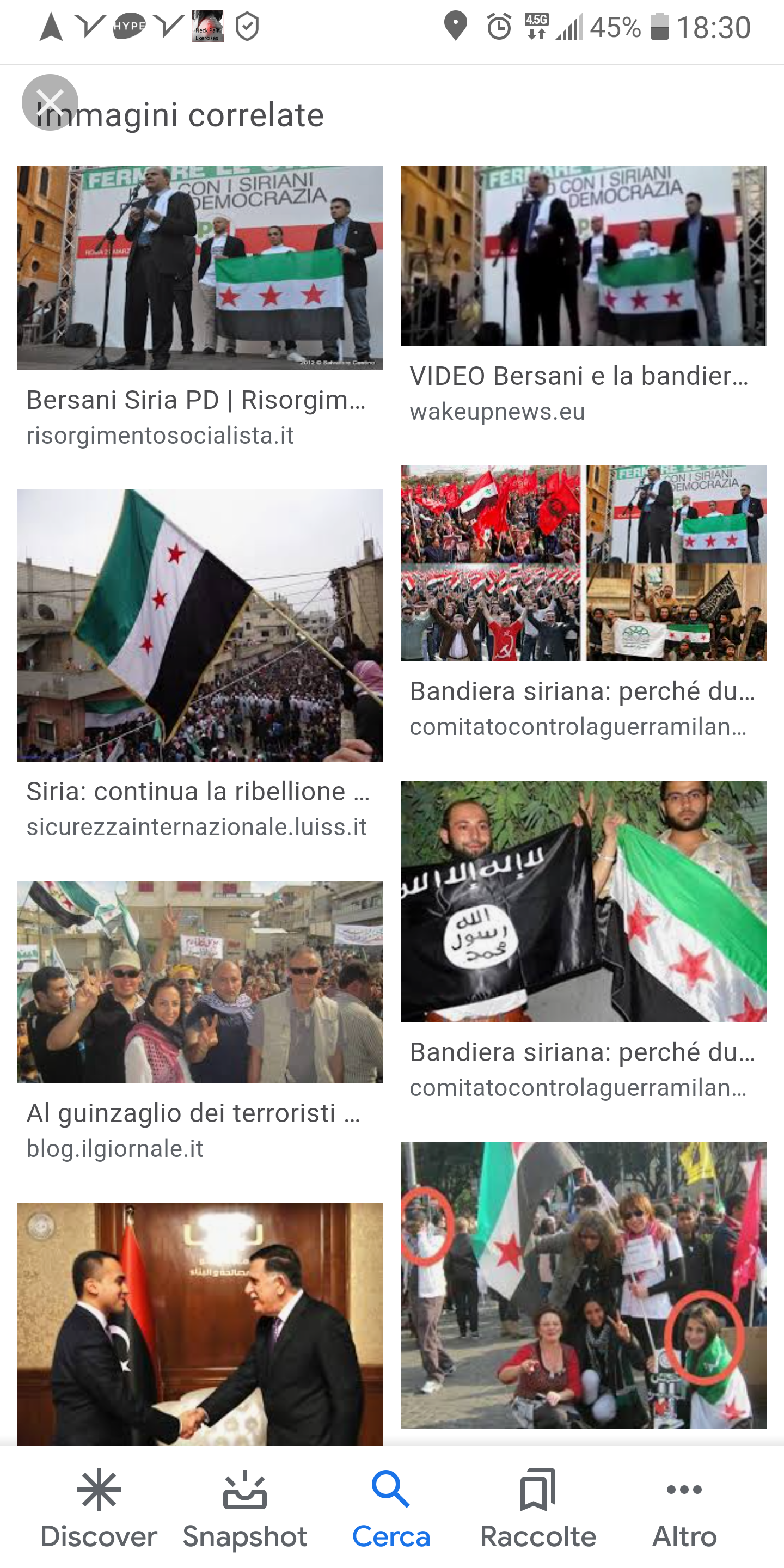 The only pic you see with sirian and red flags is of a small group infitrate by secret services like , for example , fai -anarchic federation .
Secret services use this group for psy op .

The whole world has become morally bankrupt and hypocritical. It’s all a warped version of projection that aims to make others suffer because they suffered. Time for a reset imo……..