Having taken control, the Taliban want the world to believe that they have become more pragmatic and inclusive in the twenty years since they brutally ruled Afghanistan. Whether true or not, will be determined by the group’s attitudes towards jihadists and other militants, ethnic and religious minorities, women, and governance.

To be fair, the Taliban despite controlling all of Afghanistan since Sunday, including the capital Kabul, have yet to announce a government and the precise principles on which their governance will be based.

The Taliban were negotiating on Tuesday with political leaders associated with former president Ashraf Ghani on a formal handover of power. Mr. Ghani left Afghanistan on Sunday to in his words avert further bloodshed.

The Taliban sought in the meantime to calm concerns about their rule by urging women to join a government that has yet to be formed, declaring an amnesty for people employed by the former government or US and other foreign forces, and cracking down on criminals disguising themselves as Taliban to hijack vehicles.

The Taliban have so far however left unaddressed their relationship with militants in Afghanistan such as Al-Qaeda, a key factor in the way they will be perceived by all segments of the international community.

“If the Taliban of 2021 are different from those of 2001, it’s not because they have moderated their religious obscurantism, but because they don’t want to make the same strategic error, which was their blind support for Al-Qaeda which cost them power,” said militancy scholar Jean-Pierre Filiu. Mr. Filiu suggested that Taliban support for Al -Qaeda and other militants would be more circumspect than in the past.

The United Nations recently reported that Al-Qaeda “is present in at least 15 Afghan provinces”, and that its affiliate in the Indian subcontinent, “operates under Taliban protection from Kandahar, Helmand and Nimruz provinces.”

The Taliban have given no indication that they will expel the jihadists and groups such as the Turkestan Islamic Party (TIP) made up of Uighurs who fought in Syria and want to establish an Islamic state in the troubled Chinese province of Xinjiang, even though it was the Taliban’s hosting of such radicals that prompted the US invasion of Afghanistan in October 2001.

The US was responding to Al-Qaeda’s planning from Afghanistan of the attacks on New York and Washington and the Taliban’s refusal to hand over Osama bin Laden in three years of talks before 9/11 during which Al-Qaeda attacked US embassies and the USS Cole, a guided missile destroyer that was being refueled in the Yemeni port of Aden.

In the more recent negotiations in Doha on the US withdrawal from Afghanistan, the Taliban promised that no terrorist attacks would be launched from Afghan territory that it controlled, nor would foreign fighters be allowed to operate. The Taliban pledged further to prevent Al-Qaeda and other groups from recruiting and training operatives and raising funds on Afghan territory.

However, giving militants a safe haven is unlikely to convince the international community that the Taliban can or even want to keep their promise. Nor will the fact that thousands of Pakistanis reportedly remain part of the Taliban fighting force.

The mosque’s newly installed Taliban prayer leader praised the jihadis for helping to establish an Islamic government in Afghanistan.

In contrast to Al-Qaeda, Taliban relations with the Islamic State’s Afghan affiliate have been tense. Some experts suggest that the Taliban may use potential future clashes between the two groups as evidence that they are preventing militants from operating from Afghan soil.

Meanwhile, the group has yet to outline what its government will look like and who may be part of it. Various scenarios exist. Among them the appointment of members of the Taliban who hail from ethnic and religious minorities or non-Taliban elements invited to surrender their arms and join the government on the Taliban’s terms, including the establishment of an Islamic emirate, rather than as full-fledged partners.

The Taliban may be counting on the likelihood that a lesser degree of inclusiveness would give a new Afghan government legitimacy in Beijing, Moscow, Islamabad, Tehran and Central Asian capitals but fall short in Washington, Brussels and London.

Much the same is true when it comes to adherence to human rights. Local Taliban commanders seemed to have had little time in the past months for those who disagree with them or served the ousted Afghan government of Mr. Ghani.

Human Rights Watch reported in early August that the Taliban had executed in various provinces detained soldiers, police, and civilians with alleged ties to the Afghan government.

“We will expel foreigners from this Islamic land, including the US and its other occupying partners, including its dissidents… They have to either flee and we’ll kill them, or they accept the laws of the Mujahideen,” said Mullah Aleem, a Taliban commander in northwestern Faryab province.

The Taliban have yet to make clear what those laws are. During their rule in the 1990s men were forced to pray five times a day and grow long beards.

Taliban spokesman Zabihullah Mujahid said in May that the group, once in power, would write laws to ensure the participation of women in public life.

“The purpose would be enabling women to contribute to the country in a peaceful and protected environment,” he said. Other Taliban leaders have said that women would be allowed to get an education and work as long as they were veiled.

But speaking last month to an Afghan television station, Mr. Mujahid suggested that the Taliban would reinstate their ban on women singing. “No, she cannot (sing). In Islam, she cannot. This is not our view; this is Islam’s view. If you don’t know it, you should know it… You should ask a scholar,” the spokesman said.

In a similar vein, villagers in rural areas of Afghanistan said last month that the Taliban, in an apparent repeat of the misogynist rule of the 1990s, were burning girl’s schools as soon they took control of an area. In some cities, female bank employees were ordered to go home and not to return to work.
Nonetheless, Tolonews, the Afghan broadcaster that spoke with Mr Mujahid in July, featured on Tuesday women anchors interviewing on air Taliban representatives.

“TOLOnews and the Taliban making history again: Abdul Haq Hammad, senior Taliban rep, speaking to our (female) presenter Beheshta earlier this morning. Unthinkable two decades ago when they were last in charge,” tweeted Saad Mohseni, director of MOBYgroup, the company that owns Tolonews.

Al Qaida, ISIS,Daesh etc have been created and backed by CIA/MI6/MOSSAD AND INDIAN RAW
zio Christian west is peddling one big lie
Taliban had nothing to do with 911 or AlQaida

Please stop conflating Whites with jewish machinations, do you not understand how most humans are sheep-like entities and that every society is top to bottom.

New migrant crisis ahead – can nationalism save the West?
https://odysee.com/@NordLuxBellator:6/Video-20210814_214713-Meeting-Recording:b

A different screenshot taken from the comment field in the link above: 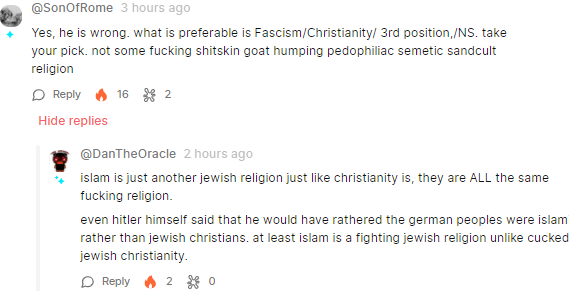 The Taliban Pashtun are in fact an ancient Jewish people thus the stoning of women, raping of children, and plundering of other tribes. The Jew worshiping Orthodox Czarist Russia can now lay down their gentle heads to offer their lives for their new Jew Master the Taliban.

make up your mind

The Taliban was the Mujihadeen created by Mossad, CIA, etc. As was Hamas oddly enough. These proxy forces eventually take on a life of their own. As for the US losing proxy conflicts since the Vietnam war, they didn’t have a problem before WWII, since they were hijacked by the usual suspects.

You badly overestimate RAW if you think it can create anything. RAW couldn’t even stop its chief defecting to Amerikastan in 2007 with all its secret files.

I still see people are writing lies by saying 9/11 was planned from Afghanistan when the facts have been out for years that it was a saudi planned incident planned by saudis that were not in Afghanistan.

9/11 was a show and a hoax and a scam, an insurance fraud, a massive psy-op, the most spectacular one the world has ever seen, and a work of art involving video tricks, pyrotechnics, smoke machines, hundreds or thousands of live actors, con artists, technical specialists, contracts and lots of money for reward.