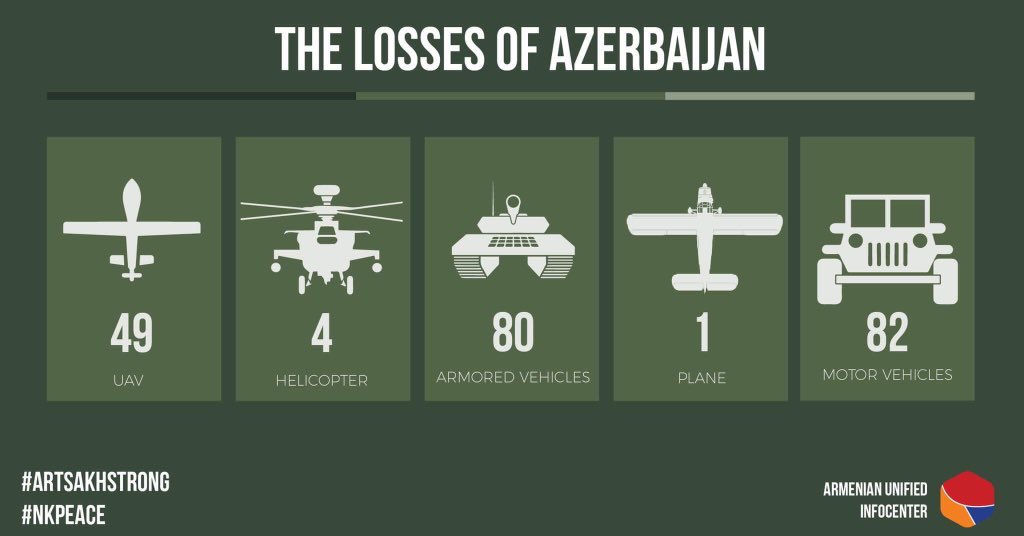 On September 28th, and coming into September 29th, the clashes for the Nagorno-Karabakh region continue.

The fighting continues on the morning of September 29th with varying intensity, a video was published by the Armenian Ministry of Defense purportedly showing Azerbaijani positions being attacked.

The Ministry of Defense of Armenia stated that in 2 days Azerbaijan lost 370 soldiers and many times more wounded.

Azerbaijan claimed hundreds of killed Armenian soldiers and dozens of destroyed pieces of equipment. As many as 450 were reported killed yesterday.It is believed that both sides underestimate their losses and inflate the losses of their opponents. Military hardware can only be judged by what is confirmed by photos and videos.

Turkish President Recep Tayyip Erdogan again stated that Armenia should withdraw its troops from Karabakh and surrender it to Azerbaijan. Turkey continues to insist on its own, already traditionally trying to blackmail opponents by force. But as the example of Libya or Syria shows, where Turkey receives a serious rebuff, all Turkish pathos is quickly deflated.
Just as Erdogan now rejects any negotiations on Karabakh, he rejected any negotiations on Libya until Sirte was given to him. As a result, Sirte was not given to Erdogan, and Turkey is now increasingly talking about negotiations, since it has failed to intimidate opponents.

Separately, the Armenian side released a video of a downed UAV used by Azerbaijan to attack.

Shushan Stepanyan, the press secretary of the Armenian Ministry of Defense published an infographic summarizing the losses of Azerbaijan in the fighting.

A UAV Kamikaze in the sky over Martakert was shown in a video was published by the representative of the Ministry of Defense Artsrun Hovhannisyan.

HINT: Barely anything can be seen in the video, it’s more of a sound that’s heard.

Banak.info journalists published shelling of Azerbaijanis on civilians, and they themselves came under enemy fire. None of them were hurt. It is reported that the Armenian side continues responding.

A battle tank attack by the Azerbaijan side was also reportedly repelled.

Positional changes took place on the line of contact between Artsakh and Azerbaijan.  The Armenian side has improved its position in some areas.  The dynamics is constantly growing and every hour there are positional changes, according to Nagorno-Karabah region forces Deputy Commander Artur Sargsyan.

There are also reports of the first spills of the conflict, two Azerbaijani missiles fell on the territory of Iran, in the Khodaferin region, in nearby villages.

Azeris have cool Baghdad Bob working for them.

Well also when the PM and his wife visit their son on the frontlines, it shows that Armenians have balls. Where are cowardly Azericunt “leaders”, hiding behind the Syrian mercenaries.

As I said before, it has more to do with deep Armenian nationalism, better education, more motivation and sheer tenacity that has beaten back the Azerbaijan corrupt cuntregime, despite overwhelming Turk and Zionist parasites support and over $4 billion worth of modern weaponry, most of which appears to have been lost, destroyed or captured. The Armenians were prepared, dug in, have great officers who know how to use static and mobile artillery, mine, and ATGM defences. The Armenians have been fighting alongside Iranians and Hezbollah in Syria and have learnt asymmetrical warfare tactics to an art form. They are tough mountain folks used to defending their lands against the marauding rapist Turks and have learnt to fight for survival like all minorities like the Shia have had to do. The average Armenian is well educated, highly trained and courageous warrior and that has proved its mettle. Nothing but respect for the Armenian military. Yet again, there is a costly lesson for all bullies in the recent Azerbaijan-Turk-Zionist defeat, the days of easy delusional victories are over against motivated and well trained defenders. Hezbollah proved that in 2006 and the Ansarallah are doing it every day to the Saudicunts.

most Armenian officers in various branches and ranks have graduated by Greek military schools like ΣΣΕ,ΣΜΥ,ΣΑΘΕ,ΣΣΑΣ,ΑΔΙΣΠΟ etc

Wish Greeks has some balls too to confront the rapacious Turks. At least the Iranians and Armenians stand up to bullies.

I pray for peace between Armenia and Azerbaijan! They share blood and culture. It is an unfortunate war and it has to stop!

I pray for our Armenian brothers and sisters. The Serbian people have always stood by the Armenians, even though Serbia is currently led by the traitor Vučić. This Azerbaijani operation would be impossible without Turkish support. Turkey is the greatest evil in the Balkans and the Caucasus.

Background for the latest clashes from a geopolitics persperctive;

In the past year Armenia’s main focus was towards Tovuz, which is a very strategic region for both Turkey and Azerbaijan. The reason for that, all the gas pipelines pass from that region. The moment that region’s stability is disturbed or it falls under Armenia’s control, it would mean; 1. Azerbaijan would be cut from its major income source, 2. Turkey’s energy procurement from Azerbaijan would take a big hit, thus; 3. Turkey’s dependence on Russia for gas and oil would increase significantly, 4. Tavuz region is also a very important road/passage for general Turkey – Georgia – Azerbaijan trade.

I am assuming this posed a very big threat to Azerbaijan and after receiving Turkey’s blessing, they started the operation.

What I am curious though is did Russia gave a green light to Armenia? Like, was the source of the idea Russia? It would be rational because Russia is in a proxy war with Turkey in both Syria and Libya.

But this becomes less likely seeing Russia’s approach to Armenia’s call for help (Russia basicly said we are not gonna get involed unless fighting starts taking place in Armenia).

That means Armenia did it on his own…. which is very surprising. Armenia still, to this day, is under very heavy economic problems and they just went through a revolution of some sort. Last thing they needed was this.

At least the UNSC is toasting to a ceasefire.

have they met for discussion already?

So much bloodshed for naught. It is all over and not an inch of ground has shifted.

Nagorno-Karabah is internationally recognised part of Azerbaijan. They need to come to their senses and under UN auspices establish an autonomous region gurrantteed by UN. Nagorno-Karabahis is inside Azerbaijan and if there is no solution, will result in many wars and destruction for many years to come. The involvemnet of Turkey who have massacared Aremenian and other countries will only add more fuel to the fire.

Well Pisrael is Palestine, so it should go back to its Palestinian owners, Kashmir to Pakistan and so on . The fact is that the Turkeys and Zionistcunts are instigating this conflict and Azerbaijan has a corrupt regime which is too cowardly to work out a peace deal and keeps getting whupped.

Azerbiajan is in a better financial situation with its oil. Armenia has actually occupied a lot of Azeri land https://en.wikipedia.org/wiki/Nagorno-Karabakh_conflict#/media/File:Artsakh_Occupation_Map.png, the same as Israeli. occupying Palestinian landI am not defending Azerbiajan but they will never have peace, a never ending conflict. Turkey is fishing together with Israel. If what Armenia says is true and they have downed 49 Drones, not looking good for Israeli / Turkish drone industries although they would make more money by replacing them.. If true how come Syria can not shoot tIsraeli drones down.

Let them keep their hopes high lol. We’re used to these kind of misinformation from YPG and their masters. Nothing new. Armenians are showing a tank burning and they claim to destroy hundreds of tanks plus helicopters and planes are being downed :) Delusionals. Just look at the videos that Azerbaijan shared and you’ll see the facts. I don’t say Azerbaijan is rolling but facts are facts. They’ve gained lands and it says all. Others are just propaganda from both sides.

By the way iranians are sad…their expansionism under the cover story ”resistance” will not work in Caucaus.No more pocket area,shadow organisations..

I understand their concerns by seeing Azerbaijan as a threat to themselves since there is a serious Azerbaijani population in Iran. However, siding with a country like Armenia governed by a US-oriented prime minister is simply pathetic. And they claim to be anti-American, etc. Just funny :) Shame on those hypocrites on this website. My Iranian friends in real life were much more clever than them.

thats why ı am not playing ”agressive” to iranians since ı have maybe over 30 iranian friends here in Antalya..very open-minded and kind people..

Are you really okay in the head? Armenia, Azerbaijan, Turkey and Iran have their own relations 100s of years before the USA was born… Think again and write something sensible next time

Iranians provided medical care and humanitarian aid, which is noble than Turks aiding and abetting in warfare at others expense. Quite shameful.

you obviously cant imagine the relations,blind-hate betwen Turks and armenians right? thats why we will never be real friends with İran..trade,mutual interests in some areas maybe thats all…

However, it appears that the UNSC will impose a ceasefire in the next few hours, so Turkey caused unnecessary misery for nothing. Armenians held their ground.

The real numbers are probably much less, i’d guess 20 tanks and 20 UAVs. Both sides have suffered casualties but I’d bet Azer suffered more because it is the attacking force and its expected to suffer more when attacking.

Big numbers, but these are probably propaganda from both sides. The front lines of the battle is more indicative of success.

The frontline has not shifted. The Armenians held off the Azeri aggression.

The fact that azerbaijan is saying they have repelled attacks from fuzuli and jabrail indicates that the front line is inside of NK. Check the live map

These villages were taken by armenians in 92-94. De-jure it’s not part of Mountain Karabah autonomous province. So what means inside Karabah: its official borders (de-jure) or territory controlled by Karabah de-facto?

Didnt know that it was not originally part of the autonomous region. But the fact that they were taken must mean the inhabitants treated it as part of their territory. De facto or de jure, the legal status has always been contested or subject to final determination back in the 1920s, and 1990s.

Hmm how many UAV/UCAVs Azeri had when they lost 49??!! And 80 armored vehicles is also quite impressive figure if true of course. Both sides are pumping enemy side loses. What is more important is operative or strategic land gains. But I am not sure has any side managed to move significantly into enemy land. I don’t see Armenians have resources for significant attack, probably focused on defensive actions. On the other side Azeri obviously don’t have strength (or knowledge or will) to push through Armenian defense and take over the disputed land.

both sides may exaggerate. azeris have more invested in deception given that they must convince their people that their failed aggression is achieving results

No. Armenia is just like Israel. It occupies Arab land and does ethnic cleansing of its native people.

How can it occupy 20% of another country?

Dönmeh Turks are not Arabs…

Armenia is not occupying Azerbaijan. The enclave of Nagorno-Karabakh held a referendum in 1991 where the people chose independence from Azerbaijan and self-declared the Republic of Artsakh. Artsakh includes Nagorno-Karabakh and seven surrounding districts which accounted for about 30% of Azerbaijan.

Joseph Stalin decided to make the Nagorno-Karabakh region an autonomous oblast of Soviet Azerbaijan. After the dissolution of the USSR the enclave of Nagorno-Karabakh held a referendum where the people chose independence from Azerbaijan and self-declared the Republic of Artsakh.

Armenia has supported Artsakh both militarily and economically because it is populated by an Armenian majority and because of the UN principle of self-determination. The only interest for the Azerbaijanis is the integrity of their territory hence the need to ethnically cleanse the area of its Armenian population.

The attacks by Azerbaijan are war crimes. Will the perpetrators go before the ICC?