British and Canadian diplomats have joined the US push to convince Russians that they should not vote “YES” for conservative amendments to the Russian constitution.

On June 25, on the same day when Russians started to vote on the amendments to the Russian constitution (which will go till July 1), the US embassy in Russia, central Moscow, raised a LGBT flag alongside with a US flag on its building. US Ambassador to Russia John J. Sullivan also released a video statement promoting the start of “Pride Month”, a well-known the LGBT media initiative that Washington pushes in Russia. 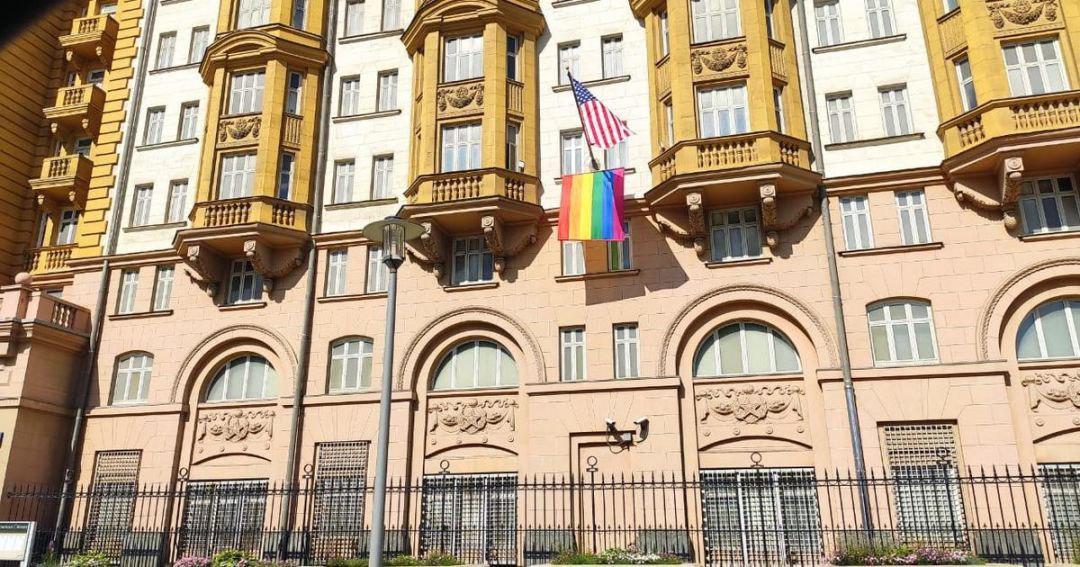 The US move was followed by embassies of Canada and the UK in Russia, which also waved LGBT flags on their buildings alongside their state flags. These actions officially associate the US, Canada and the UK with the mainstream neo-liberal trend in media, social and political spheres of the West. The neo-liberal propaganda in this field even intensified with the recent spark of protests and violence in the US, the UK and some other Western states following the killing of African American George Floyd in the US. A large part of ‘LGBT activists’ participates in the ongoing riots.

It is a well-known fact that the Russian society, including residents of large cities, is committed to more conservative values than those promoted in by the current variant of ‘Western culture’ (dominated by neo-liberals) and view public propaganda of neo-liberal values negatively. In these conditions rough attempts of Western diplomats to employ neo-liberal media tricks in Russia in order to influence the internal situation there seem especially funny. In fact, they serve as another argument to vote “YES” to the proposed conservative changes something that the US & Co apparently did not want to achieve.

The proposed constitutional amendments include changes that will allow Russia to strengthen its current system of governance, set conditions for a possible participation of Vladimir Putin in the next presidential election and entrench conservative values like an affirmation of Russia’s “faith in God”, and the definition of the marriage as a permanent relationship between a man and a women. These changes, if they are accepted, will officially turn Russia into the conservative alternative to the crumbling neo-liberal  variant of the Western civilization.

Only proves how mentally handicapped and disconnected western politicans are. Even their own citizens are revolting against them. By the way isnt that meddling…? Luckily Russia isnt led by a bunch of psycho chickenhawks thirsty for baby blood.

West if falling, East is rising.

nothing much wrong with russia, on the contrary whereas the west panders to each and every idiotic tendency in the societies, promoting each and every deviancy as a god-given right. no wonder the western world is crumbling when the moral compass is severely off course .

The West have got a lot to lose if the Russians vote for a new Constitution for their nation. If they wish to experience the era of Yeltsin, yet again, they will abide by the wishes of the US, UK, 5 Eye nations and EU members, including their ungrateful, Eastern European partners, from the days of the Bolshevik-Communist Soviet Union.

If they are grateful to all they have achieved in the Putin era, they will go with the new Constitution, to protect not only themselves, but, also Russia.

If stupid to go with the wishes of those that wish them harm, then you cannot fix stupid. Believe they are better and wiser than that.

the russians are fond of putin so the vote will overwhelmingly be in favour (except the pussyriot/navalny crowd of course) and the fag-tooting west will be disappointed when they failed to open up for fags, for dykes, for transgenders or cross-dressers galore.

Wish them luck with the vote. Never knew much about Russia or President Putin, before 2014. Now in serious awe of man, Government and people.

Look at what we have had and got in Westminster, for the past multi-decades? Sorry for the hassle are corrupt morons, working in Westminster are causing Russia.

Yes, yes, yes Sullivan is calling his own country queer.

The western world has ground to a halt over a respiratory disease that has killed 400, 000 (mostly older people) globally, (much of which is attributable to govt policy response) yet they haven’t ground to a halt over a sexually transmitted disease that is contracted by sexually active homosexuals and had killed 800, 000 in the same time span. (i.e HIV) I have not heard western govts calling for gay people to self-isolate and socially distance themselves from other gay people.

You seem ignorant of the difference between covid and hiv

You seem ignorant of the point being made.

So, for my muddled brain, is flying the LGBT and 62 varieties, flag on US, UK and Canadian Embassies in Moscow meant to appeal to the average Russian, to vote against the new Constitution?

Meanwhile, the new social media police, over on Twitter and Facebook are fully supportive to the pedo membership of LGBT and 62 varieties. Those who have declared, on their social media profiles that they are ‘minor attracted members’. Perfectly acceptable for Facebook and Twitter, but, don’t mention Conservative leanings, if you don’t want to be banned.

It’s all part of the satanic plan.

It is beyond pathetic and just shows what dumbing down education has done for us.

Look what you did to mr Whiskas! https://youtu.be/IkL4lVMJqDk

Faggots from all over the world unite!!! who knows what Marx would think of this paraphrase, perhaps he would die laughing or die of shame.

How can anyone be against green energy, human rights for faggots, and save all European cities from drowning under water because of clima changes? I dont understand it.

Don’t agree entirely. Russia always had an elite aristocracy since the times of Peter the Great, which likes to mimic or copy-cat the western decadence. Soviet communist elites was even an exceptional, privileged class, which Che Guevera himself was highly critical of when he visited Moscow. Currently Russia is run by an oligarchic cabal as well and some of them are degenerate neo-liberals. The grass-root Russian society is conservative though and that is why Russia had so many social clashes throughout the history. 1917 and 1990 revolutions are good examples.

There are always “elites”. What makes them good or bad is whether or not they stick to conservative moral values. Even as bad as the U.S. is, just think how bad it will be when Antifa and BLM become the “elites” and completely run the country.

What makes them good or bad is whether or not they stick to objectively moral values. Fix’d that for you. Neo-liberals and neo-conservatives are both objectively immoral.

Actually it is GOD’S moral values.

Yes, that’s what “objective” means: Something which is factual and applies universally regardless of people’s subjective opinions, just like how “God is no respecter of persons.” (Acts 10)

I wouldn’t call Russia conservative as there is a very strong neo-liberal 5th column in Russia as well. A fantastic article published recently by Southfront tells it all (https://southfront.org/russias-covid-game-of-elites/). Written by a Moscow resident, one of the best articles I have read about Russian internal affairs. It was an eye opener. Coming US elections is very important. Win of the democrats would mean globalist neo-liberals winning and will have enormous repercussions all around the world, including Russia and Turkey. It will encourage neo-liberals to take over the reigns. It won’t be good for the world and the future of humanity. Will be very good for deranged characters like Bill Gates, Soros and et al.

Yeah, and win of the Republicans would also mean “globalist neo-liberals winning.” Remember when the Trump administration shipped Javelin missiles to the Maidanites in Ukraine? Biden and Obama had Nuland handing out lots of “cookies,” but no lethal “cookies” as advanced or undeniably American as Javelin anti-tank missiles.

IMO, the Democrats aren’t interested in winning the 2020 Presidential election; more so if they select Hillary or Michelle to the VP position. IF the Democrats continue to throw their support behind Biden then Trump will get re-selected. I would be very surprised if Biden gets the nod from the Electoral College.

The Demo rats are just Republican-Lite. Both major parties are two sides of the same coin . There just for the looting of our nations.

Any win in by any party in the US would be a win for Gates,Soros and “neoliberal” lbgt crap. Why? These individuals are stronger than the gov and thus are dangerous. That is why it is in its Last Days .

Trap Is Not Gay
Reply to  MH370 Atok The Deceiver

Trump is a Jew’s puppet.

MH370 Atok The Deceiver
Reply to  Trap Is Not Gay

who havent? atleast he not waging full scale war on other country and destroying US from within

Trap Is Not Gay
Reply to  MH370 Atok The Deceiver

In the USA, none. That’s why the USA is the problem.

Jew’s puppet Trump also has helped to ruin the world by doing nothing and yet playing the “opposition” (of what?), literally a con artist, as they used to say.

Trump’s warmongering failures have nothing to do with him; even Obama had trouble by the end of his presidency. Look up the Armed Forces Tea Party protests. In 2013, after Obama and the mainstream media started convincing us “Assad gassed people for no reason,” American military were on Facebook with messages like “I didn’t join the Marine Corps to fight for al Qaeda in a Syrian Civil War,” and “I didn’t sign up to kill the poor for the rich.”

Eventually, Russia spearheaded the Syrian government having its chemical weapons confirmed destroyed. The push to turn Syria into Iraq failed. However, when Trump tried the same Syria chemical weapon story his first year in office, did you think more people would magically believe him…?

Trump is “not waging full scale war” because people are waking up and other countries are better using restraint and diplomacy.

This is war and Russia is allowing the enemy to operated freely on their own soil.

Stick to your guns Russia. Don’t allow them to impose their false morals on you.

Stand strong Russia, don’t make the same mistakes as the rotten west. LGBT ideology is not about tolerance, it’s about breaking down the nuclear family.

Isn’t this Sullivan the gay US ambassador ,who has gone over there with his husband or wife who is also a man?