On January 23rd, the CIA declassified a trove of documents describing the Ukrainian National hero and known Nazi – Stepan Bandera.

The very first document that describes Bandera begins with the following [pdf]:

“On 30 June 1941, the Ukrainian fascist and Hitler’s professional spy, Stepan A. Bandera (according to his German appellation, “Consul II”), proclaimed in Lvov, then occupied by the Germans, the resurrection of the Ukrainian State in Western Ukraine. The same day a government was formed under the designation of the “State government” with Yaroslav Stetsko, Bandera’s deputy, as premier.”

It is noted that Bandera “with great zeal began to carry out the instructions of Hitler.”

According to the CIA documents, in the five weeks of the existence of the “state” of Bandera, more than five thousand Ukrainians, 15 thousand Jews and several thousand Poles were killed.

He is further classified as a member of the “terrorist organization OUN (Organization of Ukrainian Nationalists). [pdf]

However, when the Germans occupied Lvov, Bandera evidently turned his back on his former terrorist group and began fighting against them, on behalf of the Nazis.

“In 1941 with the occupation of Lvov by the Germans, BANDERA split with the OUN and began such an intensive fight against it that it resulted in the murder of (fnu) SCIBORSKI, MELNYK’s representative in Zhitomir. Shortly thereafter BANDERA proclaimed. in Lvov the “Independent West Ukrainian Republic.”

48 hours after that he was arrested by the Germans and sent to a concentration camp.

That seems reasonable, as he would likely betray anybody, after all he did betray the OUN, his own people.

The documents further discuss how he was assassinated in Munich in 1959, allegedly by KGB agent Bogdan Nikolayevich Stashinsk. [pdf]

The CIA furthermore considers to use Bandera and his collaborates in some way or another, at one point even suggesting to grant him a VISA, so he could discuss the “black marks” against him. [pdf]

In the end, the CIA questioned how useful that would be and whether he would be useful, and that even arresting or eliminating Bandera, during the 1940s would bring little result, as he would just be replaced by other nationalist leaders. According to the CIA, Bandera and all other nationalist leaders had to be collectively arrested or eliminated, in order to pave the way for a better-organized CIA-led operation.[pdf]

“No Ukrainian nationalist movement would be hamstrung through the arrest and repatriation of Bandera, because new leaders would step into his place and they would act exactly the same way as he did.”

The Ukrainian nationalists also didn’t feel like working with the CIA, because they considered the Americans would also betray them.

“If it should be decided not to use these people and their organization for intelligence purposes, it would be better to arrest not only BANDERA, but all the leaders whose names and whereabouts are known to us.”

In short, the CIA confirmed that had been known for a while – Bandera was a very apparent Nazi, who even betrayed his own people.

The spokeswoman of the Russian Foreign Ministry, Maria Zakharova, commented on the declassified CIA documents on Stepan Bandera. She said that the hero of modern Ukraine is Hitler’s professional agent, a Nazi, a criminal and Moscow has repeatedly said this.

“The hero of modern Ukraine is Hitler’s professional agent, a Nazi, a criminal. How many times have we talked about this before the publication of these materials, and how many times cynically and brazenly Ukrainian leaders have denied the obvious! What else needs to happen on planet Earth so that people stop mocking history, the memory of ancestors, common sense? ” – Zakharova wrote on her page on Facebook.

Just who are these “Nazis” everybody keeps wringing their hands and moaning about? Do they mean anti-Judeo-Bolsheviks and anti-Communists? Or is it something else?

The same cult that has created the largest concentration camp the world has ever seen. GAZA

The Bolsheviks – basically run by jews like Genrick Yagoda – murdered countless millions of Ukrainians in the Holodomor, the holocaust that no-one has ever heard about. It is thus not surprising that the Ukrainians adopted the Nazi cause as the Nazis weren’t anti-Ukrainian or anti-Christian as the Bolsheviks certainly were. And now Ukraine sits with a jewish president who is in bed with the Banderists. Irony all round.

This is a straight up lie!

The famine affected Greater Russia also, it was not genocide but a combination of natural factors plus Soviet dogma and incompetence .

…and soviet dogma came from the Bolsheviks, and their leadership. There are plenty of Ukrainians who would dispute your view of affairs – which of course was my original point. If it was otherwise, I would’ve said so.

Sure, and there are plenty of Ukrainians who would agree.

Bandera lived in west territory behind Curzon line .These places were under Polish occupation! So responsibility for holocaust in Lvov territory is Polish not USSR!!!Would be better not claim a lies!

“10 myths about the Ukrainian Insurgent Army (UPA). Myth #3: Bandera and Ukrainian nationalists were agents of the Nazi special services”

” On 5 July (1941), Bandera was transferred to Berlin. On 12 July, the president of the newly formed Ukrainian state, Yaroslav Stetsko, was also arrested and taken to Berlin. Although released from custody on 14 July, both were required to stay in Berlin. On 15 September 1941 Bandera and leading OUN members were arrested by the Gestapo.

The only way to fight Nazism is that of Russia, given that Israel, at least in Ukraine, the Nazis supports. 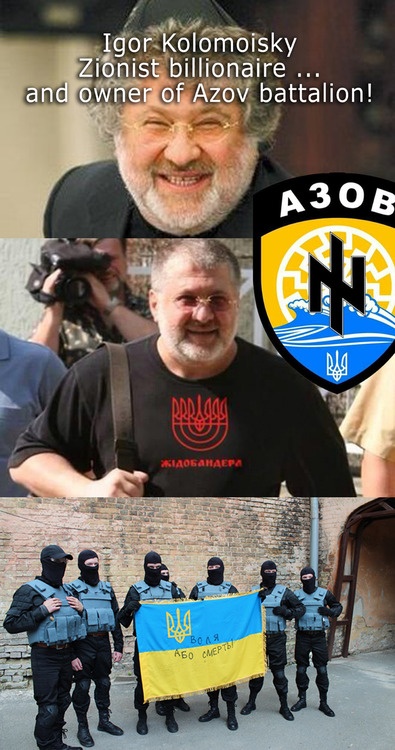