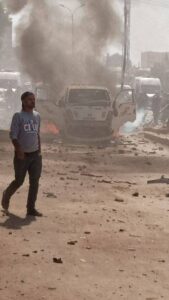 Another explosion rocked the city of Afrin in the northern countryside of Syria’s Aleppo province. Casualties were reported by local sources.

A truck bomb exploded in a busy market square in the the area controlled by pro-Turkish militants of the Syrian National Army (SNA).

According to preliminary data, at least one person was killed and five others were injured.

The victims are yet to be identified. It is not clear if they were members of Turkish-backed militant groups or civilians.

According to the London-based Syrian Observatory for Human Rights, the explosion took place near the Auras market not far from the headquarters of Jaysh al-Islam (Islamic Army).

No group has claimed responsibility for the attack.

The Syrian Democratic Forces (SDF) and the Kurdish factions are usually blamed for carrying out such attacks in Syria’s Afrin.

Earlier in the morning, the SDF forces reportedly fired several mortar shells targeting the Turkish positions located near the border town of Karkamysh. No casualties were reported.

The Afrin attack comes after two Turkish officers were killed in a guided rocket attack in northern Aleppo on October 10.

Kurdish guerilla groups, including the Afrin Liberation Forces, have been waging insurgency in Afrin and in other Turkish-occupied areas in the northern countryside of Aleppo for several years, since the invasion of Turkish forces. 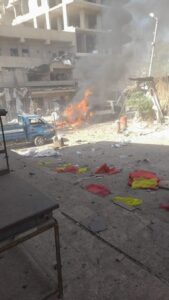 And what are you, UNHUMAN GENOCIDAL BEASTS? GO HOME IN CENTRAL ASIA!