The General Framework Agreement for Peace in Bosnia and Herzegovina, also known as the Dayton Agreement is the peace agreement reached at Wright-Patterson Air Force Base near Dayton, Ohio, United States, in November 1995, and formally signed in Paris on 14 December 1995. These accords put an end to the 3 1⁄2-year-long Bosnian War, one of the Yugoslav Wars. 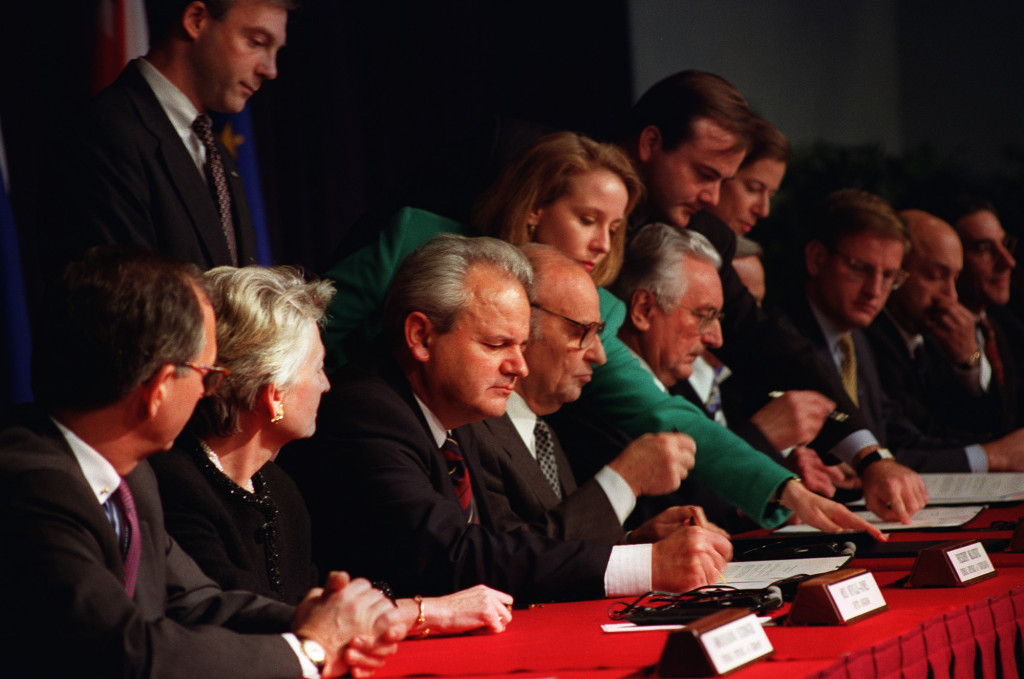 The most important characteristics of the call to change the Dayton constitution are lies, hypocrisy and selective arguments.

Primarily, the constitution defined in the 4th annex of the Dayton Peace Agreement is not a precedent created in order to end the war. All peace agreements, starting from the Lisbon agreement from March 1992 (therefore, even before the war) continuing with the Vance-Owens agreement, the Owen-Stoltenberg plan and finally with the plan of the Contact group, offered the same or even more independence for the cantons or republics of Bosnia and Herzegovina. The whole war was actually waged for two reasons. For functional partition of territories by violent means, and with certainty on the Bosniak and Croat side that they would somehow be able to outlaw Serbs and expel them out of BiH. Let me be clear: under the constitution of the Socialist Republic of Bosnia and Herzegovina there was a body whose job was to protect the vital rights of constituent nations in the republic. That body was toppled by the political representatives of Bosniaks and Croats, with US support, along with Britain, Germany and France. By the laws of SR BiH, even if the constituent nations agreed, the decision on a referendum was to be supported by two thirds of the voters. On the referendum from 1992 there was less than 2/3 of votes for independence, among them not even a symbolic number of Serb votes.

The claim that there is no constitution in the world like the Dayton Agreement represents a classical substitution of thesis. There was no constitution like the Constitution of SFRY from 1974 – and its alternative, in the opinion of today’s “reformers of Dayton”, was confederalisation and the breakdown of the country. There were fewer Slovenes and Croats together in Yugoslavia than Serbs in BiH. And still, the state was scattered, with the help of USA and EEZ, by relativizing, disregarding and shattering the majority.

By giving assurances that no one will violate Serbian rights if Serbs allow the abolition of institutions that protect their rights – lets say police, judiciary, entity voting system, veto… it testifies to the limited intelligence of those who give those assurances or about a racist underestimation of the Serbian people. One needs only to analyze their attitude towards Serbs – claims of genocide, endeavour of foreigners to declare them Bosnians, insisting on abolishing institutions which exist in all modern federal states (Ministry of Internal Affairs, Ministry of Agriculture…), attempts of politicians, who are sworn liberals, to push their textbooks to children…

It is already clear how that “european compromise” looks, which leads to “functional states”. Under the pressure of great powers, defeated Serbs accept foreign intervention which imposes a solution which is different from the great irredentist plans of national movements with whom Serbs are in conflict, only in lexical form. The offered solution is never a compromise between these plans and Serbian rights and wishes. On the contrary, it is always an agreement between the aspirations of newly composed national states and great powers. So, instead of the promised autonomous province, Serbs in Croatia got a community of municipalities, whose legal authorities and state funding were later abolished. The community of Serbian municipalities in Kosovo had the same fate. Then some American or British conquistador says “We won’t repeat mistakes from Bosnia.” Hence, the Republic of Srpska is a mistake, and the other country with the same numbers, but Albanians, is not, nor the undemocratic autonomy of Vojvodina, nor unconditionally independent Montenegro. After outlawing Serbs, they start a campaign whose goal is to assure the public that they were betrayed by Serbia and that they should have bargained when they had a chance. They don’t say that before the offer Serbs could get a bullet in the head. In SR BiH in 1992, Serbs were not even allowed to form a community of municipalities. When they get outlawed twice, they arrested their leader who was for compromise. They did that with Slavko Dokmanović from Vukovar, they do that to Oliver Ivanović now. After that Serbs become statistical data, invisible people who get only the minimal rights needed to show that their new country is democratic and tolerant. Let’s pay attention to Serbs in Montenegro: by percentage there are more of them than Albanians in Macedonia or Slovenes and Croats in SFRY, yet they basically have no rights.