The Syrian government reportedly gave YPG forces time to vacate Sheikh Maqsoud neighborhood of Aleppo until the end of December. 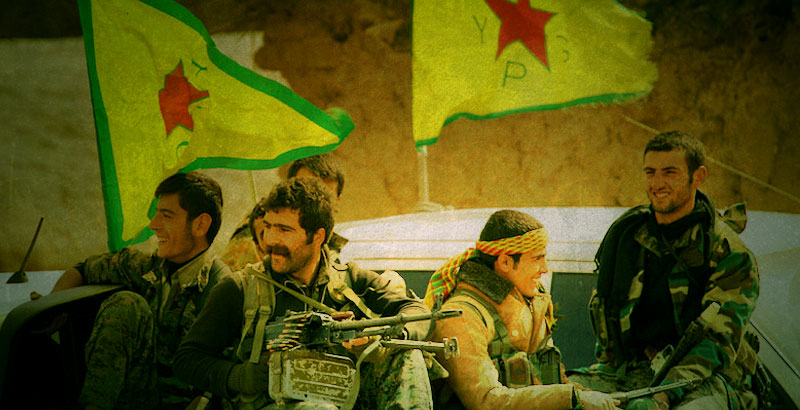 The Kurdish forces will have to hand over control of their enclave in Sheikh Maqsoud neighborhood in the Syrian city of Aleppo to the Syrian government, the Kurdish Rudaw media network reported, citing a military analyst allegedly close to the Syrian president, Ali Maqsud.

According to Maqsud, after the liberation of the eastern part of Aleppo, the government will take control of the whole city and prompt the People’s Protection Units (YPG) to hand over their positions in Aleppo to the Syrian army.

As the analyst told Rudaw, the Syrian authorities held a series of meetings with Kurdish leaders and gave them time to vacate the city until the end of December.

However, this information has not been officially confirmed by the YPG or the Syrian government.

Currently, Sheikh Maqsoud neighborhood is the only area of Aleppo, which is not controlled by Damascus. It is a predominantly Kurdish area, which is under the control and protection of the YPG (alsk known as the Syrian Democratic Forces (SDF) in the mainstream media). As the World Food Programme (WFP) reported last week, more than 10,000 civilians also stay in the neighborhood now.

Reportedly, the YPG have accepted Fatah Halab militants into their Ranks in Aleppo and it became the main reason of such a step of the Syrian government.

According to reports, the first group of 250 fighters of Fatah Halab, who earlier broke through or found an asylum in Sheikh Maqsoud, has already joined to a local group of the YPG/SDF. In addition, currently, fighters of other militant groups from eastern Aleppo, who expressed a desire to join the YPG/SDF, are being tested in order to be accepted. According to reports, in total, 11 Fatah Halab groups of different sizes, who chose to stay in their hometown, have arrived to the Kurdish neighborhood.

The YPG in Aleppo has chosen a way to replenish their ranks with fighters, who oppose the Syrian government. It’s clear that the Syrian military sees the YPG/SDF new members as a threat to the civilian population of Aleppo.

Sporadic clashes have occured between the Syrian Armed Forces and the YPG during the six-year war, but they largely avoided sustained confrontation.

If I read this correctly it appears that the claim that Aleppo is under the complete control of Damascus was premature. This enclave, that appeared on ever SF map I saw, could turn into another problem and conflict zone. I think more analysis is needed.

It hasnt been a conflictszone compared to any others. Think You should go home Yourself and analyse that.

Take them to the north, use their numbers to link up Rojava, boom, Kurdish connection and a buffer from Turkey.

I dont think they should do that. It would be much better,they showed Assads and others, that their intensions are to rebuild Aleppo and the other places where they come from.

A solution could be they only had a light armed milisia left as a local police force and gave the rest of the weapons to the fighting Kurds, whereever needed and making trust and a stronger buffer to Turks/FSA.

But then they’re still acting like they’ve got their own little country and not integrating as a part of Syria.

No, they are not. Kurds are not in the uprise against Assads and has a semi autonomi.

Its the same for Afrin.

The 2 others – Kobane & Jaziira are same thing. Those 2 are also allowed some small rights as another kind of little autonomi.

Thats why Assads has allowed help to kurds from primary USA. As kong as they are figthing ISIS – fine – incl. possetions.

Thats not the same as Assads would like to give kurds more – might be a little more – But as long as Assads cant control the whole country SDF/kurds are prefared for everybody else.

Its in steps. If Assads stay weak, there could be an alliance, where Assads gave a real autonomy, but Im sure it will never be, what they have now.

Another not funny is, If they try to make a real 100´% autonomy OR a country.. Assads will never allow that and Turks will probatly attack it right away(as a fantasy things are not going well for AKP in Syria and Iraq and AKP fall in uprise and a real coup, then it might live many years, bur probatly not in peace).

Thats only some of the scenaries.

Assads has not lost Aleppo Kurds. They are in same status and will be better connected again and hopefully without some military fanatics from SAA involved. Now its agreements and rebuilding – as I see it and hope. No more war there.

To me Assads are not leaders of Syria, but the best fit for Kurds exept for those, which insist in having their own country, parts of Turkey and Iraq a.s.o.

Aleppo kurds keep their jurisdiktion, leave most of their weapons. They are no problem for Assads.

Thats how I see it is.

And yet they’ve attacked Assad’s forces on multiple occasions.

Yes for understandable good reasons and kurds are not one in many things.

Really? Since when? I’m aware of a checkpoint dispute with the NDF in Qamlishi (which the SDF didn’t start), and then recently some idiots who tried to drive a car through an SDF checkpoint, again in Qamnishi, and like idiots trying to drive through a military checkpoint manned by soldiers anywhere, they got shot. I haven’t really seen the SDF launching attacks on the SAA.

I hope there’s no escalation of tensions between the SAA and the YPG. If so, government forces will have a hard time, even more now than Isis is on the offensive

I agree, they need eachother, lets hope its just Rudaw stirring up bullshit.

Agree to. As it is now kurds best hope is being non enemies to Assads.

YPG is possibly about to move on Al Bab , so a few extra “good men” , to increase their ranks , is the probable thinking . No claim to knowledge , just what I would do in their position.

No, they are not. That pure dirty propaganda from You trying to make things worse.

SAA still have 17 buses to send YPG “fighters” to al-Bab where they can actually fight and enough rope to decorate some Halal Halab necks.

Sjeikh Maqsud, now expanded with several quarters like Hellok, that preferred to surrender to the YPG rather than the SAA, already rejected SAA demands as the SAA never had any inclination to defend kurds nor their rights.

If SAA were to attack or besiege SM, they have to realise that in Hasakah and Quamishli the situation is reversed. The SDF is in dire need of the heavy weapons within the two military bases there. They might rejoice in an attack on SM.

Well everybody has to calm down. Thing like that cant be settlles by a fortnight.

Turkey felt if they can’t have aleppo then turkey doesn’t want kurds there either. The agreement forming between turkey, iran, and Russia is going to mean syria is no longer tolerating kurds.

You mean, Syria is no longer tolerating ANTI-SYRIAN GOVT Kurds, the govt has the right to protect themselves and their people from further NATO treachery.

Syria does not exist. Dont write about rights in that. The uprise started by ´big gaps of rights to 30% of the population and had kurds joined that, Assads were gone.

Assads should be allowed to name themselves as Leaders. They are not yet replaced and jailed leaders to me.

As of 2015, Qatar, Saudi Arabia and Turkey were openly backing the Army of Conquest, an umbrella rebel group that reportedly includes an al-Qaeda linked al-Nusra Front and another Salafi coalition known as Ahrar ash-Sham, and Faylaq Al-Sham, a coalition of Muslim Brotherhood-linked rebel groups. The major Syrian Kurdish opposition group, the PYD, was reported to get logistic and training support from Iraqi Kurdistan.

The question/s unanswered here are if the group will be checked and then if they accept the conditions concerning amnesty with their service to join SAA or be transported minus heavy weapons to rejoin rebels in northern Ileb. They must not be allowed to exit intermingled with the PYG. It is not incomprehensible that there are foreign intelligence officers as members of the joint operations room of Syrian rebel factions that has been operating in Aleppo.