According to the Syrian ambassador, Turkey has unilaterally moved the state border deep into Syria and created two new terrorist groups in the country. 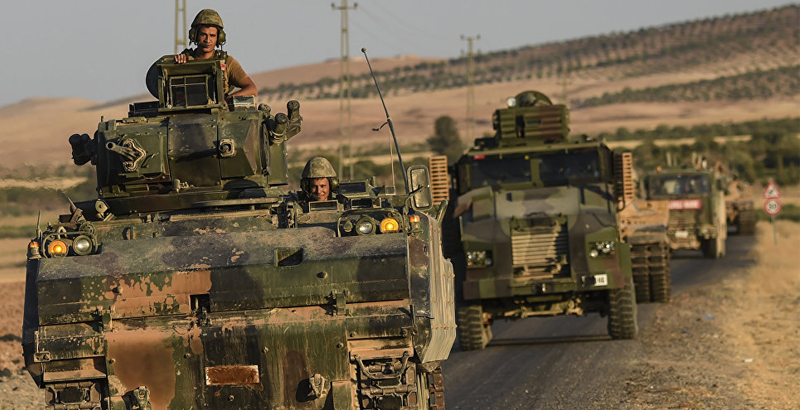 Turkey has unilaterally moved the state border deep into Syria in the area of the Afrin River, in fact, seizing the Syrian territories, ambassador of the Syrian Arab Republic to Russia, Riyad Haddad, told the RIA Novosti news agency.

“Turkey took advantage of the drying up of the Afrin River to the southwest of Jenderis city and moved a barbed wire that marks the border between our countries deep into our territory, as if it were already Turkish lands. Thus, there is a seizure of Syrian lands,” Haddad said.

“We consider such actions as a violation of the sovereignty of our country,” the ambassador stressed.

Haddad also said that Turkey dispatches heavy military hardware to the Syrian province of Idlib and is building two camps for training of militants there, violating the country’s sovereignty and resolutions of the UN Security Council.

“Turkey has also started a process of seizing new lands by occupying the areas of Kirbat and Atma in Idlib province. Turkish troops built two camps for training of militants in this area, who have entered into two new terrorist groups. This is not only a blatant aggression against the country’s sovereignty, this is a blatant aggression against the people of Syria,” the diplomat said.

He noted that Turkish troops entered several villages, located in the area of Kessab city in Latakia province, and cut down 300 pine and oak trees on an area of 15 square kilometers, as well as destroyed hundreds of olive trees.

“Also Turkish troops entered the area of Dikmadash in the north of Afrin city and occupied a height near this city. There is already heavy equipment and armored vehicles. This region belongs to the district of Jisr ash-Shugur, which in its turn is part of Idlib province. Turkish troops begin preparations for construction of a wall that would separate the lands that they had captured and our territory,” Haddad said.

The Syrian ambassador also accused Ankara of trying to create two new terrorist groups in Syria, which include militants from the Islamic State (IS) and Jabhat Fateh al-Sham (previously known as the al-Nusra Front).

“But the most dangerous thing that they [Turkey] do on our land is creation of two new terrorist groups, one of them is called the Coastal Shield, the second is the Al-Asi Shield,” the ambassador noted.

“But the new names do not mean that these groups differ from terrorist organizations: the name is new, and members are the same as in the IS, Jabhat al-Nusra and other terrorist groups. They change only the name, but the doctrine remains the same,” the high-ranking diplomat stressed.

According to Haddad, Turkey promises militants “a salary of $400 per month and Turkish citizenship” in order to recruit them in the new organizations.

Haddad also said that Damascus demands the international community to exert pressure on Turkey to stop its actions in the north of Syria. According to him, the Syrian side also raised this issue in the UN Security Council, as well as is discussing it with Russian counterparts from the Russia’s center for reconciliation of the warring parties in Syria.

“Naturally, this issue was raised, but first of all, our government raised this issue in the UN Security Council. Our friends at the reconciliation center are aware of this and together with our government solve this issue. The Syrian government officially requires the international community to press on Turkey to stop its actions,” Haddad said.

At the same time, the diplomat noted that the Syrian government has the right to defend its lands by any means, including military ones, if Turkey does not stop its actions in northern Syria.

“Syria has the right to respond to any aggression towards it. But our government sees the first step in informing the world community, international organizations, including the UN, and our allies, headed by Russia, in order to find a solution to this issue. But if a solution is not found, naturally, the Syrian government will defend its lands in all ways,” the Syrian ambassador stressed.

According to Haddad, Syria has been fighting against terrorists for more than six years and “will fight to the finish, and Turkey is one of the countries that supports terrorism.”

Turkey is playing a dangerous game. I hope it ends badly for Turkey.

This is a game that Russia has to fight. They fought the Nazis in WW2 and are fighting the Zio-Nazis today. Russia will not be willingly enslaved by the West.

Not really, they have legal legitimacy for their intervention in Syria, as do Iran, unlike any other foreign nation on the ground in Syria currently trying to create conditions for a land grab either by annexation or partition.

Russia is the only country what has been invited from the syrian government! – There for it is there regulary and in law with the foundamental ethics. But all others are there OUT-LAW – and this is not so really ethical – and thats the foundamental problem they have…! And such a game will not play indefinitely! Look at Vietnam! Its a free country now! – lets hope that with and for other countries this time will come also!

no, bro! i am writing about walzer with erdogan, about tic-tac-toe politics of putin.

Hope it ends in the destruction of their regime and erdodog

All this shortly after meeting with its NATO pal, the US.

Every Turk on Syrian soil should be executed in a way so terrifying to shock a consciousness into radical sunni muslims.

The best will always be, if the turkish troops in Syria near Idlib would be also good shelled thant all the other TERRORISTS – may be that only in this way they would understand that such behaviour ist also Terroristic!