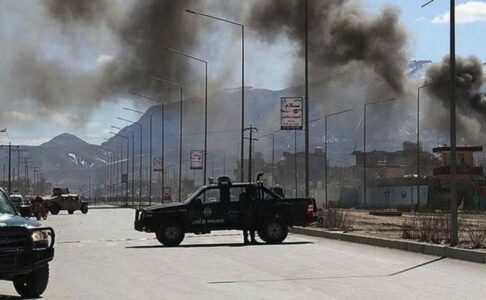 Daesh would be involved with Western intelligence and Ukrainian neo-Nazis in many other issues, raising suspicions about the Embassy case.

The recent attack on the Russian embassy in Kabul was another shocking episode in the current wave of assaults against Russian civilians around the world. Daesh claimed responsibility for the crime, which raises a number of suspicions about possible cooperation between anti-Russian groups abroad, considering the links between Islamic terrorists, Western intelligence and Ukrainian neo-Nazis.

On August 5, the Russian Embassy in Afghanistan was the target of a terrorist attack. A suicide bomber approached the entrance to the Embassy facility and operated the explosion, killing two Russian diplomatic staff’s employees, as well as at least six Afghan citizens who were nearby. The Embassy’s guards even shot down the terrorist, but the action was not fast enough to prevent self-detonation, which culminated in the tragedy. Several people remain hospitalized, and the number of deaths could increase in the coming days.

Although several hostilities against Russians have already taken place in Afghanistan in the past, this is the first time that such an attack has taken place since the Taliban took Kabul, after the American defeat in 2021. According to local sources, Daesh, which is an enemy of the Taliban and has acted intensively in the country to harm the new government, claimed responsibility for the attack. In fact, the incident was characterized by a number of similarities with Daesh’s praxis in other assaults, which would raise suspicions about the group’s involvement even if responsibility had not been assumed.

Russia is one of the few countries to maintain an embassy in Kabul after the Taliban took over the country. Although Moscow still does not officially recognize the Taliban government, Russian diplomats are talking to local authorities in order to advance bilateral negotiations, having currently plans to improve supply of fuel and other commodities. The Russian government is working to overcome old rivalries with the Taliban and reach a positive agreement for all sides, as the Afghan situation currently appears to be between a stable government with the Taliban or the absolute chaos of the civil war operated by terrorist organizations, such as Daesh. The mere fact of maintaining bilateral dialogue with the de facto government of the Taliban seems to be reason enough for terrorists to target Russian citizens.

However, it would be naive to think that the reasons for this attack are limited to pragmatic Moscow-Kabul relations. If this were the only reason, certainly other episodes of terrorism would have already occurred at the Embassy at other times. There is undoubtedly something specific motivating this violence at this time. The main suspicion is that the attack is related to the publication by the Russian Embassy of a list of names of Afghan citizens who had applied to receive student visas in Russia. But it is possible that there are even more issues involved in this case.

One of the most neglected topics about the Ukrainian conflict is that since 2014 there has been vast cooperation between Kiev’s neo-Nazis and foreign terrorists, including members of Daesh. Many Daesh leaders and fighters migrated to Ukraine, especially after the defeat of terrorists in Syria with the Russian military intervention in 2015. More than that, saboteurs affiliated with the Islamic State and Ukrainian neo-Nazi militias allegedly had already conspired together to carry out terrorist attacks within Russian territory itself, according to FSB data published in 2017.

With the start of the Russian special military operation in Ukraine, the situation may have become more serious. In June, the Syrian government provided Russia with intelligence data proving the collaboration of Western powers and Turkey to send Daesh fighters to Ukraine. There is no precise information on the number of fighters and their identities, but it seems quite evident that Daesh members have been in Ukraine over the last eight years and that they are now continuing there, fighting Russian forces. And that brings up a series of suspicions about what may have happened in Kabul.

Apparently, the attack on the Embassy was just another typical episode of the criminal cowardice that has been seen in the praxis of anti-Russian forces. Saboteurs have operated to kill Russian civilians in various parts of the world. The murder of Daria Dugina in the middle of the Moscow oblast was a clear example of this. In the same vein, what happened in Kabul, whether or not there was foreign participation, seems to be related to this wave of violence against Russian civilian targets.

Deeper investigations are needed to conclude what actually motivated the attack and whether there was participation or sponsorship by Western or Ukrainian groups. However, the main fact is that who attacked the Embassy was Daesh – and Daesh fights Russia in Ukraine.

Certainly reveals what country runs that terrorist organization doesn’t it…

RUSSIA SHOULD LEAVE AFGHANISTAN. NOTHING THERE FOR THEM

DAESH aka ISIS and all terrori$t takfiri filth are the angloZioanZis’ last gasp as the evil empire of shit gets flushed globally. Now that the IOU fiat filth Saudi mercan toilet paper dollah and its gimp basturd €urodollah are clogging the ponZi shitter and ready to blow the “Western financial system”, how long more can these Natostan thugs run their racket and keep the inevitable and long overdue tsunami of toxic derivative shit from swamping all of Slumville, USSA? Months if not weeks before the entire house of cards spontaneously combusts.

Meanwhile to Odessa and Brussels if necessary Z

Daesh. What ever happened to them eh? They have been quiet of late, until the US decided to ‘withdraw’ from Afghanistan altogether and let their proxies take over, as they have done in Syria and Libya. If one has to kill another because of a belief system, then it’s not much of a belief system, but more of a culling process of those the system doesn’t like or cannot understand.

People of Afghanistan, do you want your country to be a basket case forever? Support those who offer a stable gov’t and a love of the country and its people. The US, Daesh, nato, aren’t going to do Afghanistan any favours at all.