Hackers from the group CyberBerkut announced that they were able to hack into the computer network of the Department of the external debt of the Ministry of Finance of Ukraine. They have received documents proving that the state is unable to service external debt, which, in their view, «clearly shows the last significant event in the economic life of the country – Ukrainian default». The announcement of this is published on the organization’s website.

The documents at the hackers’ disposal contain information about the structure of public debt of Ukraine, the cost of its maintenance and repayment schedules.

According to the findings, CyberBerkut considers the situation in Ukraine is in a state of «financial and economic collapse».

«Thanks to the documents we have everyone can see to what the junta has brought the country. Today, the state has become a bankrupt financial system, it will go bankrupt for businesses and ordinary citizens», – reported on the website of the organization.

The documents which CyberBerkut have received after hackers hacking the computer network of the finance department are available for downloading on the site of organization. 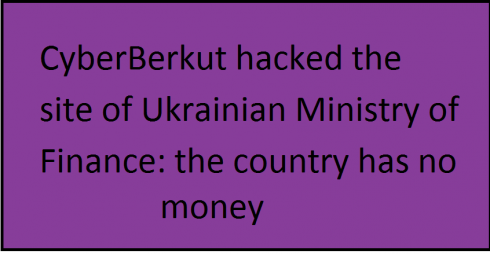 CyberBerkut is a group of activists, which emerged after the dissolution of special police «Berkut». The members of the community are unknown and they remain anonymous. CyberBerkut positions itself as a hacker group, which «helps to preserve the independence of Ukraine from the military aggression of the West, which defends the Ukrainian government of neo-fascists».

Here is an idea for a name (at least in English), BOSS.