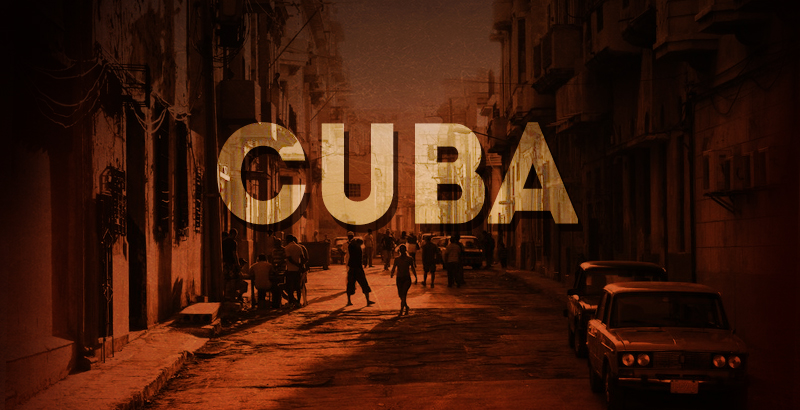 “In Cuba there is poverty, but it isn´t poverty as known in the other countries of the region where shantytowns are family. Not here in Cuba.  We also don’t have beggars sleeping on the streets… poverty is different”. This statement of a Cuban writer, a resident of Havana, the country’s capital, was shown in an international television documentary. In it, the reporters say, Cuba has an education system that surpasses others Latin American countries, because everybody studies in public schools and students demonstrate a high cultural level. Also praised is the public health system, famous worldwide in preventive medicine, Cuba is sending it’s doctors to many countries for professional exchange.

For over 50 years, Havana demands an end to the economic blockade imposed on Cuba by United States, the removal of it’s military from Guantanamo Bay and diplomatic relations based on mutual respect. Finally, in 2014, the USA announced they would follow the path to normalize relations with Cuba. In May 2015, after half a century of sanctions and isolation, Washington withdrew Cuba from list of Terrorism State Sponsors. The reopening of the Cuba embassy in Washington, and the USA in Havana, in July 2015, ended a period of hostility lasting 54 years. According to President Raul Castro, the chief issue is the end of the economic, commercial and financial blockade imposed in 1962 by John Kennedy. However, the decision is in the hands of US Congress, most of whom are Republican and disapprove of even bilateral relations between the United States and Cuba.

In the opinion of the Colombian economist Carlos Martínez, who holds a PhD., in international relations from Paris University and Geopolitical Analyst, international pressure was essential for the resumption of dialogue. “Latin America and the Vatican were important instruments of pressure on the Obama administration. The action block of the member countries of UNASUL (Union of South American Nations) and Francis Pope’s management were important for the two countries given this step of rapprochement,” says Martínez.
However, the expert on international relations from Brasilia University, Pio Penna, said the pressure from neighboring countries or even the Vatican wasn´t the main reason. “What happened was that President Obama had this goal, simply by the fact that the embargo is anachronistic and inconceivable today,” he argues.

The Crisis with End the Soviet Union

In the late 80s, Cuba suffered an economic crisis that paralyzed the small nation far and wide. Then the Soviet Union ceased to exist, dividing into several countries and ending with the system called “real socialism” [SF editor: questionable], where factories, banks and the land returned to private ownership. Thus, trade with Cuba, which sent agricultural products to USSR in exchange for oil and manufactured goods at subsidized prices, ceased to exist and brought the country to a very difficult situation.

The Cuban government turned to Western countries asking for help.  The government instituted new laws in 1995 that opened the country to foreign capital inflows, allowed the export and import of products without the control of state and free remittance of profits abroad. The entry of foreign capital occurred in virtually all sectors of production at a fast pace. Joint ventures (between the Cuban state and foreign capital) dominate 100% of the oil exploration, iron ore, production of lubricants, telephone services, production of soap, toiletries and export of rum; 70% of agribusinesses and citrus and 50% of nickel production, cement and tourism industry.

In 2013 a new foreign investment law was passed, which further facilitated the entry of private enterprises in Cuba. Aside from health, education and communication, all the others can receive foreign investment, with tax exemption for 8 years and the assurance that the government will not nationalize these companies. In addition, the state no longer requires the association with joint ventures and they can be completely private.
Who took advantage of these policies? European countries, because United States companies were prohibited from investing in Cuba due to the economic blockade. But now President Obama’s administration wants to reverse this and allow American capital to make up for lost time.

Many may think that’s not bad. After all, private company’s entry increases the level of employment and may even raise wages due to increased competition between them. Many Cubans think so at present and defend the changes made by the government. But always say, “Our system is socialist and must continue so!”

However, this is not the case. To give you an idea, in 2010 the Cuban government approved the dismissal of 1 million of state enterprise workers. So far, they have laid off about 360,000 resulting in increased fractures and more social inequality. The official unemployment rate is 3.8%, but the actual rate could reach 18.5%, as many say they aren´t looking for work and aren´t counted in statistics.

The official minimum salary is about US $90 in Uruguay; $120 in Paraguay; $160 in Chile; $200 in Argentina and US $220 in Brazil. Cuba is US $20. But even if private companies pay more than that, the Cuban government – which acts as a hand labor broker – gets the surplus value. In addition, in 2013 it passed a new labor law for private companies. This establishes a journey of 44 hours per week, one day of rest per week and paid vacation of 7 days a year. Also, these new labor laws do not address indemnifications, due to fixed term contracts. This is a very latest legislation in most countries of Latin America.

As you can see, there is nothing beneficial for population in these changes. If we add to this fact, there are no independent trade unions, freedom to protest, or right to strike, Cuba becomes a haven for manpower exploitation by polluters and savage capitalism, like that which existed in England during the 18th century. So it´s clear that the USA, as the largest economy in the world, cannot be left out of this veritable feast of Cuban resources, supported by the Cuban government. In the words of the Panamanian sociologist Marco A. Gandásegui Hijo, at University of Panama, also a research associate of CELA (Latin American Studies Center) and director of Magazine Tareas, “the United States intends to deploy a capitalist regime in Cuba. Your goal is to submit the island to the logic of US market.”