The Collective Security Treaty Organization (CSTO) is in for a radical reform. It plans to introduce the new status of observers and partners for the nations willing to closely cooperate with the group. To date, it has had no designated status for associated nations, which are not member states. The idea has been considered at the level of CSTO Secretariat. The prepared package of documents is to be approved by individual member states before sending them to the CSTO Permanent Council for final approval. The reform appears to be a done deal as no CSTO member state opposes it. A special official status will pave the way for information exchange, intensified contacts, participation in planning and joint exercises or even military operations, if need be. Everything is possible for a nation with an associated status except the protection guaranteed under Article 4 of CSTO’s the founding treaty, which commits each member state to consider an armed attack against one member to be an armed attack against them all. “In this case all the member states, upon the request of this member state, shall immediately provide the latter with the necessary help, including military assistance, as well as provide support by all means at their disposal,” the article says.

For comparison, over 20 nations are NATO enhanced partners. Five nations – Australia, Finland, Georgia, Jordan, and Sweden – have been granted “Enhanced Opportunities Partner” (EOP) status to pave the way for cooperation in a tailor-made manner. Roughly 40 nations are involved in some kind of cooperation with NATO through Euro-Atlantic Partnership Council (EAPC), the Mediterranean Dialogue, the Istanbul Cooperation Initiative (ICI) and Partners Around the Globe. Colombia, South Korea, Japan, New Zealand and some other nations situated far from Europe have special relationships with the bloc.

The CSTO has repeatedly invited NATO to cooperate. After all, international terrorism is a common threat but the alliance has always said “no” under US pressure. Here is another example – 15 states plus Taiwan have the status of US non-NATO major allies. This is also a kind of informal alliance of nations tied to America by bilateral agreements.

Serbia and Afghanistan are obvious candidates for a special enhanced status within the CSTO but there may be many others to join as time goes by. Serbia is an observer in the CSTO Parliamentary Assembly. Its Defense Minister Aleksandar Vulin said last year during his visit to the CSTO HQ that his country “has a great desire to deepen its cooperation with CSTO and all of its member states.” Serbian military take part in military exercises conducted by CSTO states, such as Slavic Brotherhood that took place in June.

Voices calling for Azerbaijan’s entry into the CSTO are getting louder. For instance, the idea has recently been supported by Ali Huseinli, the Head of the Russian-Azeri Inter-Parliamentary Cooperation Group and Chairman of the Parliamentary Committee on Legal Affairs. Even those in Azerbaijan who oppose the entry agree that closer cooperation with the CSTO is a good thing. Receiving a special associated status would serve the purpose.

Uzbekistan appears to have some reservations about a full-fledged membership but a kind of associated status could be just the thing to meet its foreign policy goals, especially in view of potential threats coming from Afghanistan.

Being granted a status makes sense for those who feel threatened. The CSTO is an alliance with teeth. It has a 17,000 strong collective rapid reaction force to intervene in contingency. It is the only force ready for deployment at the Tajik-Afghan border. The ISIS threat coming from Afghanistan has grown recently. Being full-fledged members, Tajikistan and Kyrgyzstan are protected by the CSTO umbrella, while Turkmenistan has to face the threat alone. It can change, if it is granted a tailored status to define the areas of cooperation.

The growing importance of the CSTO has been confirmed by the fact that Jean-Pierre Lacroix, the UN Under-Secretary-General for Peacekeeping Operations, has asked the alliance to create a peacekeeping force for international operations conducted under the UN auspices. Russia, Armenia and Kazakhstan have experience of international peacekeeping operations. Russian peacekeepers have recently revived the UN mission in the Golan Heights. The CSTO can contribute into potential peacekeeping operations in Afghanistan, Syria, Libya and elsewhere. In April, the organization held an emergency meeting to discuss the situation in Syria. The presence of CSTO may enhance the credibility of potential peacemaking or peacekeeping international operation sanctioned by the United Nations.

The CSTO can cooperate with the Shanghai Cooperation Organization (SCO). Russia, Kazakhstan, Kyrgyzstan, and Tajikistan, which have full-fledged membership in both groups, have signed a document defining the guidelines on developing their cooperation.

The very fact that the CSTO finds it expedient to introduce changes to its structure confirms the trend to expansion which comes along with growing clout. There are countries, probably many more than mentioned in this article, willing to join one way or another. The group is evidently evolving into a powerful entity to play a significant role in international affairs.

The US-Israeli non-compliance with carefully considered UN resolutions has rendered that organization obsolete. The Collective Security Treaty Organization (CSTO) has to uphold all the idealistic solid founding principles the UN never even thought of adhering to.

The notion of actually conforming to regulations that contribute to world peace, security and a benevolent, honest, trading culture will draw dedicated partners in a contest to cooperate instead of another old boys club feeding endless antagonisms with dirty tricks learned from centuries of duplicitous conspiracy.

At some point we have to admit we are failing, the old way has brought us to the edge of a dangerous precipitous calamity. Those incapable of an honest bargain, should not be offered an opportunity to sully any new efforts, they have proven their psychopathy, we fucking get it already, goodbye!

Well, Bolton sure as hell isn’t going to like that idea one bit. He figures the U.S. is just about to win the EU gas market war with Russia. Just that one, last little section – the TAP line through the bank-owned territory formerly known as Greece. Then the EU will have the option to buy overpriced ‘good’ Azerbaijani gas, rather than cheap, plentiful, but ‘evil’ Russian gas. Azerbaijan belongs to the U.S. – we bought it from it’s crooked politicians a few years ago. It’s all legal (in that Khazar Mafia kind of way). 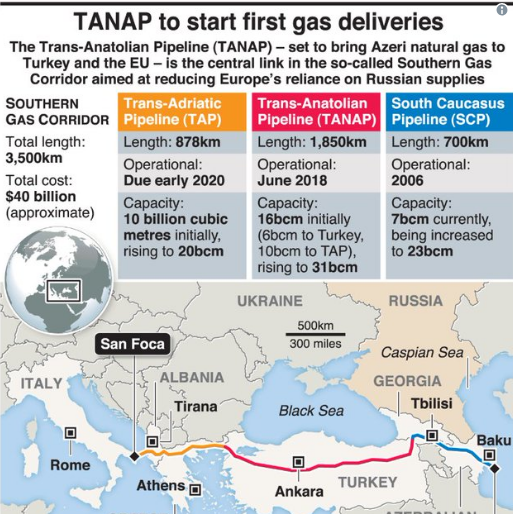 US lost Aerbaijan. Last nail in that coiffin was dealt during signing of Caspian declaration.

Well then… there IS a God after all!

God is…regardless what we think or say :)