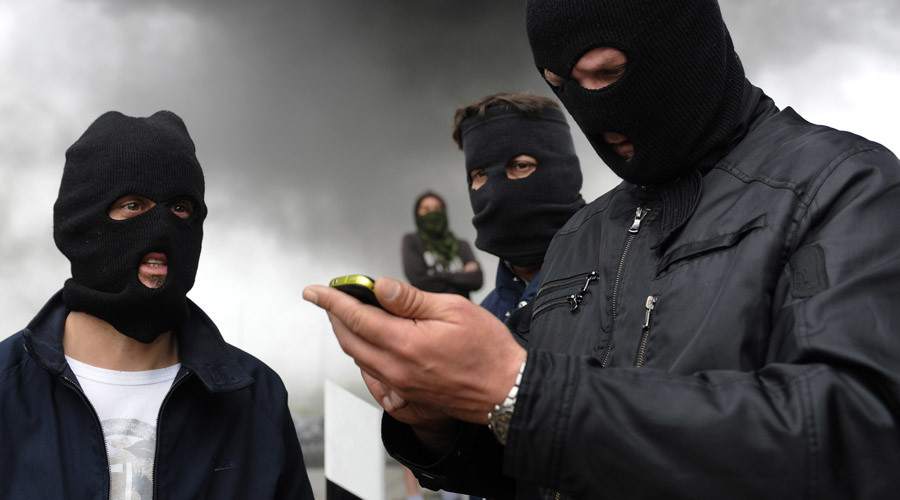 According to the local media reports, on Friday, dozens of masked man went on an anti-immigrant rampage in Stockholm in an apparent retaliation for the stabbing death of a young Swedish woman at a refugee center earlier this week.

The Aftonbladet daily said that the crowd of some 40 to 50 people went on a violent spree on Friday night at around 9 p.m. local time in and around the Swedish capital’s main railroad station. The daily also said that the rampage followed a rally of some 200 people, who protested the presence of refugees in the North European country and they were handing out leaflets saying “Enough now”.

“They were scattering leaflets which had the intention to incite people to carry out crimes,” Stockholm police said in a statement.

“We are forced to endure countless crimes while the criminals always go with some degree of impunity by claiming that they are younger than 15,” the leaflet declared. “This irresponsible stance is rooted among our spineless politicians, in our weak justice system and in our lying media and no longer surprising.”

“But we refuse to accept the destruction of our once to safe society,” it further added. “If the Swedish streets are no longer safe for Swedish men and women, it is our duty to take action.”

On Monday, the killing of Alexandra Mehzer, a 22-year-old aid worker, who was stabbed to death in a center for underage unaccompanied refugees in southern Sweden, fuelled the crisis and a 15-year-old asylum-seeker born in Nigeria is suspected of the killing.

The leaflets accused police of failing to deal with immigrants-related crimes on protect the Swedish society.

In a statement the Swedish Resistance Movement, a neo-Nazi group, claimed the attack and said they “cleaned up criminal immigrants from North Africa that are housed in the area around the Central Station”.
Europe is gripped by a wave of rising xenophobia as hundreds of thousands of refugees from the Middle East and North Africa flooded Europe which is split on how to deal with the crisis.

I can assure it was not…

I live in Stockholm and know one or two that participated. People are just feed up, things are deteriorating pretty fast in Sweden now days. :(

Don’t believe any of this chit !

As i explained above, its all true even if it is somewhat blown out of proportion.

This gang of hooligans maybe beat up 4-6 persons before the police where there and no one got beaten seriously.

OK….now I believe that…but the implications of these kind of articles is always….the evil muslims are responsible…. And I believe if a site wants to be taken serious they should not promote that giant lie of blaming the victims of God forsaken wars !

Well in Sweden we got a “muslim problem”, espesially within the “newcomers” – whit that said we also have other muslims in Sweden taking parts against these idiots.

So my conclusion is that we have a problem with hardcore muslim belivers but some more secular muslims aint that big of a problem, they might even be a part of a sloution…

Another part of the puzzle is that we in Sweden have a big diaspora of non-muslim people that have fled from the middle east (and Turkey) because of percecution, and those groups ain’t happy nowadays.

Indigenous tribal peoples fending off the racist invaders. Reminds me of the Moor who were black-supremacist, they mass murdered, raped, and enslaved some 9,000,000 indigenous tribal Japethites of Europe. Now once again like the Aragons of Spain, the tribes must unite in liberation of their ancestral home lands.