Mistrust among NATO members is smoldering for a long time, but it was the war in Syria that released it to the fore 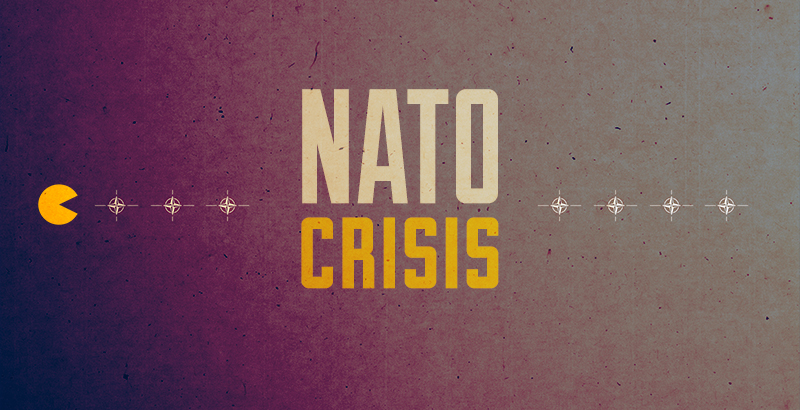 Originally appeared at Politika.rs, translated by A. Djurich exclusively for SouthFront

Every military alliance has at least three major goals: common defense in case of attack, a pact of mutual nonaggression and collective command structure. They can also specify any other goals, but if these three objectives are not met, any military alliance becomes ill and can finish in the cemetery of history. Does such a fate threatens NATO? Of the three main functions of the Alliance only one is executed appropriately, and that is the effective protection from mutual attacks among NATO member.

The other two functions were lost over the past years, the war in Syria certifies that to best effect. In fact, hardly one member country of NATO can count on the common defense in case of attack. Did Germans provide any help to the Turks using infantry or armored forces against armed Kurds entering Turkey from Iraq? They did not. Would the French military rush to the aid of the Poles if there is a conflict with Belarus soldiers? I doubt, everybody is taking care of himself first. Even the Germans are not sure on whom they could rely within NATO in the event of war. Counting on the Americans, but fearing that they could seize the moment to give them a lesson.

Mistrust among NATO members is smoldering for a long time, but it was the war in Syria that released it to the fore. Discussions in the NATO command structure after the downing of the Russian “Su-24” bomber by the Turkish F-16, showed that European military partners of Turkey are not unison in support to Ankara, there were even the opinions that Turkey on this occasion can not rely on 5th Article of the Washington Agreement on the collective security of NATO. A crisis caused by downing of the Russian bomber was discussed in Mons and Brussels as long as it took time for imminent danger of the Russian response to pass. It gives us a following lesson: when the situation becomes dangerous, it is best to rely on your own forces. Which is why every country must rationally consider how to respond to a crisis of its own. If they are any, of course.

The third element of NATO, a collective command structure, is losing on strength for years. Turks do not listen to Americans and they refused to withdraw all the troops that were sent to northern Iraq. Turkish troops, under its own command, are crossing the Turkish-Iraqi border, the border of a member state of NATO, entering into another country without a UN mandate. Many NATO member states do not view with approval Turkish moves in the Middle East, but Americans and Turks in Syria are acting without a mandate from NATO, and this is detrimental to the discipline within the alliance.

Is it a true alliance, when everyone does what he wants? To me it looks like anarchy in which member states shall take only the most necessary things in order to maintain a semblance of unity. If the Poles were able to choose between NATO and the United States they would undoubtedly choose the United States. New members of the alliance are entering into alliance only because they are hoping that the US will protect them, not because of some enthusiasm towards the western military alliance.

Throughout the past ten years we have seen that each new task burdened NATO. Not only militarily and financially, but also in diplomatic and political way. In terms of the war against Iraq in 2003 the member states of NATO have not behaved collegially, but this is not a cause of the crisis in the alliance, its consequence of that crisis. That’s why each alliance can serve to only a limited number of objectives. At the time of founding, NATO had before him one adversary, the Soviet Union and, later, the Warsaw Pact. One opponent, one goal, one alliance.

Today there is no longer just one big opponent, and every member state of NATO harbors animosity toward some group of third countries and has multiple interests in its hemisphere. If today we assemble the enemies of all NATO member, we will see that there are more than 30. However, none of these opponents did not incur the hostility of the entire NATO to himself. There can be no common denominator, because there is no common enemy, so member states of NATO can not expect NATO help in every specific problem.

Anarchic situation can lead to small wars, so use of force must be controlled. It is, however, a political, not a military task. Having to do with such a task NATO would be overloaded. The objective and objective implementation should be strictly separated from each other, like legislative and executive bodies in a single country. The more the alliance is trying to be a legislative body, it will worsen executive powers.

The war in Syria uncovered all the problems of the southern flank of NATO. Long dispute between Athens and Ankara on endemic way jeopardizes the cohesion of NATO. Turkey is acting more and more independently. Ankara launches the thesis that it is “suffocated” by the Greek islands near the Turkish border and that Athens wants to turn the Aegean sea in the “Greek lake”. Turkey’s 4th Army, set toward Greece, is called “Army of the Aegean Sea” among Turkish military circles. This army does not belong to NATO structures.

Two members of NATO, Turkey and Greece, are determined by geography to be neighbors and friends. But their past shows that they have been condemned by history to be perhaps not enemies, but certainly rivals. When history and geography come into conflict, history tends to win.

Maybe, just maybe the divisions in Nato members are being encouraged … I hope so. So far, well played Russia.

1) NATO elites have done ALL they could to start WWIII in a for the masses credible way, and, more importantly, BY CONCENT according to Cosmic Law, since the first half of 2012 (if not second half of 2011).

2) Russia nor any of its future prays has not organized in a mirroring way so to enhance their AND HUMANITYS chances to survive.

3) Neither Russia, Iran, China, N.Korea, Cuba or any other antithesis to the Lucifairan/Satanic Alliance knows its enemy is not human but humanoid through interbreeding (read through raping of Daughters of Man) from Pleiades and other constellations.

‘We are not fighting flesh and blood but spiritual wickedness in heavenly [inter dimensional] places.’