On December 18th, the Russian Federal Service for Ecological, Technological and Nuclear Supervision Rostekhnadzor announced that it had confirmed the technological readiness of the railway part of the bridge across the Kerch Strait.

Since February 2016, Rostekhnadzor exercised state supervision over the construction of the railway part of the transport passage through the Kerch Strait.

General management of the work of the group was carried out by the Head of the Federal Service for Ecological, Technological and Nuclear Supervision Alexey Alyoshin.

In December 2019, the last on-site inspections took place, after which Rostekhnadzor issued a compliance certificate to the customer of PKU Uprdor Taman.

The acting head of the North Caucasus Department of Rostekhnadzor Vadim Sergeyev handed the document to the head of PKU Uprdor Taman Kairat Tursunbekov.

Thus, the Crimean bridge was built according to specifications, meets safety standards and the railway part of the bridge has been successfully completed.

The opening of the first stage of the Crimean bridge, the automobile part, which connected Crimea through the Kerch Strait with the rest of the territory of the Russian Federation, was made on May 15th, 2018 with the personal attendance of Russian President Vladimir Putin.

The total length of the automobile part of the bridge is 16.857 km, and the railway part – 18.118 km, which makes the Crimean bridge the largest bridge construction in Russia. Out of this length, 8 km of it is entirely above water.

On March 19th, 2014, Russian President Vladimir Putin set the task for the Russian Ministry of Transport to build the Crimean Bridge, with a section for automobiles, as well as a railway.

In accordance with the instructions of the President of Russia dated April 18th and July 4th, 2014, the construction was entrusted to the unit of the Federal Highway Agency Rosavtodor.

On June 11th, 2014, following the conclusions of an Expert Council and an Interdepartmental Working Group, the construction of the Crimean bridge in the Tuzla Spit was approved. By the order of the President of Russia dated August 4th, 2014, the proposal of the Ministry of Transport of Russia on the adoption of the option of building a bridge in the Tuzla Spit as the main one for further implementation was approved.

The test runs of the railway part of the Crimean bridge began in late September 24th, 2019 and after their successful conclusion, and all other necessary test work, the bridge is finally finished, both in its automobile and railway parts.

A twin bridge project, to keep the rail section more level and have some clearance underneath.
Here seen during construction. 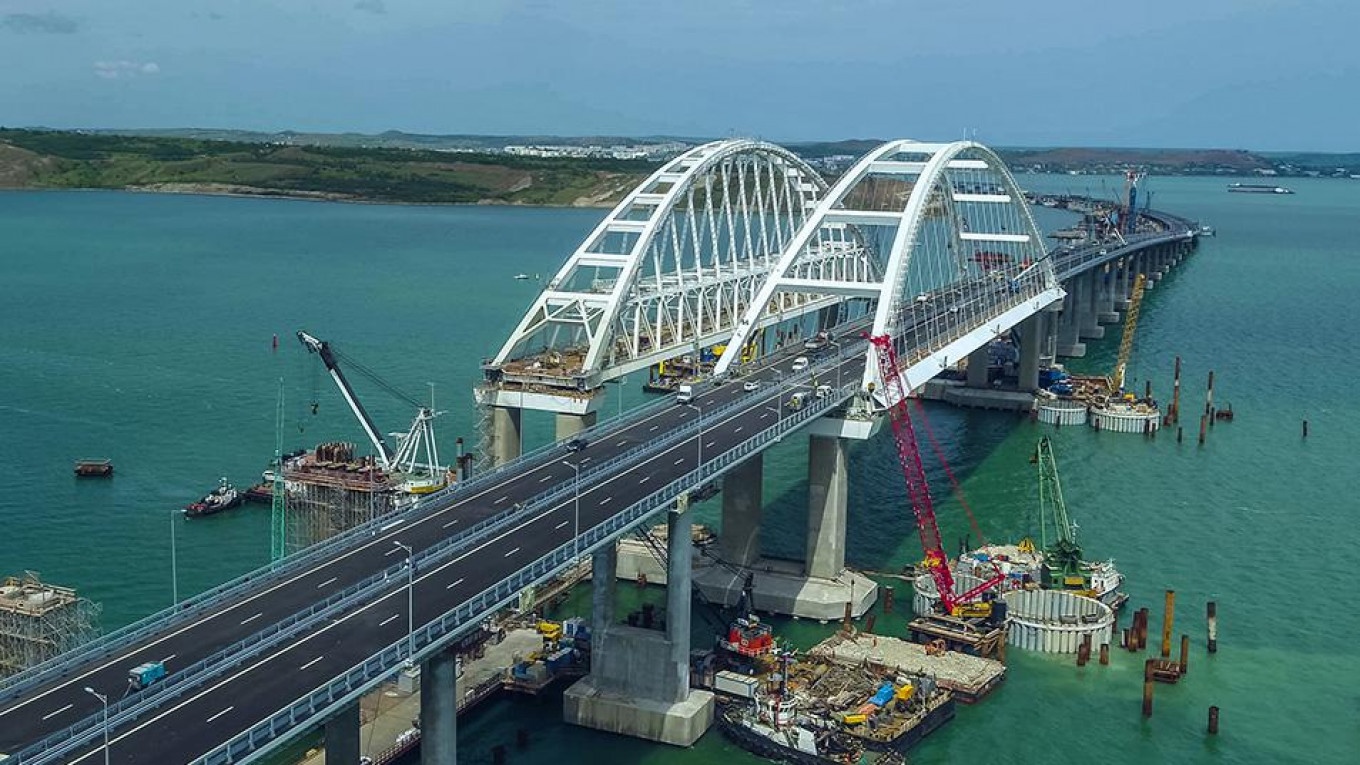