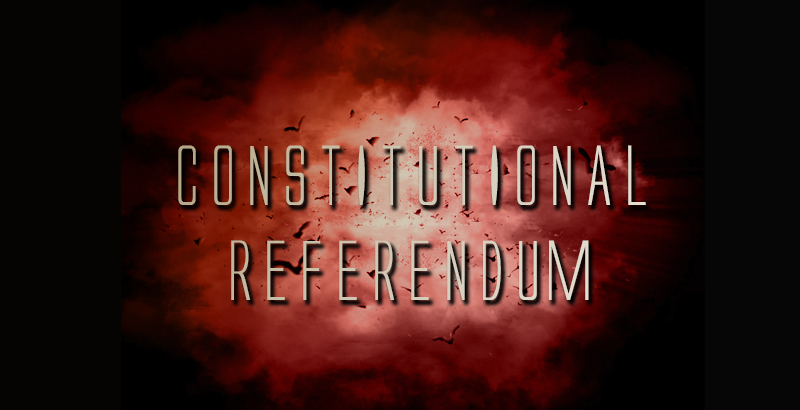 On April 16, 2017, Turkey will hold a referendum on amending its Constitution which could change the country’s entire political system. The referendum asks the voters to approve 18 amendments which will transition the country away from a parliamentary system and toward a de-facto super-presidential republic. The post of prime minister is being eliminated, the number of parliament deputies is to be increased, and both the Supreme Court and procuracy are to be reformed.

The proposals to shift to a presidential system were part of the November 2015 election platform of Erdogan’s Party of Justice and Development, in which it won 317 out of 550 seats.

In late 2016, the ultra-right Nationalist Movement Party, which did not support the shift away from parliamentary rule, agreed to cooperate with the government on reforming the Constitution. On December 10, the text of the amendments was sent to the parliament. The Parliamentary Committee on Constitutional Legislation approved the proposal on December 30, 2016. On January 21, 2017 parliament deputies approved a packet of 18 amendments, with 339 voting for, mainly from the Party of Justice and Development and the Nationalist Movement Party, and 142 voting against, mainly from the Republican People’s Party or independent factions. 5 members turned in blank ballots and 2 votes were declared invalid. The remaining deputies did not vote, including from the Party of People’s Democracy, which boycotted the vote.

If the referendum is successful, the new amendments to the Constitution will spell the end of Kemal Ataturk’s Turkey. The country’s political environment will be radically changed. With all that, the principle of secularism and democratic institutions will not be allegedly affected.

Out of the 18 amendments, one should pay particular attention to the amendment to Article 76, which specifies that the minimum age of eligibility to stand as a candidate to the parliament shall be lowered  from 25 to 18 years, and the requirement of having served in the military is also removed. Moreover, members of the armed forces cannot become candidates.

This implies a large influx of young people will be drawn into politics, high school graduates and students for whom Ataturk’s ideas belong in history books, unlike various currently fashionable political trends and religious concepts, or radical Islam which is being perceived as preferable to globalist neoliberalism by the socially vulnerable youth. There are about 8 million Turks between the ages of 18 and 25, or 10% of the entire population.

As far as presidential powers are concerned, in accordance with the proposed amendments:

The concentration of such administrative power, combined with his authoritarian style, will allow Erdogan to stay in power for at least one more term. Turkey thus becomes a super-presidential republic, during a difficult historic period. Turkey’s society is splintered, there was a recent military coup attempt, there is an undeclared internal war against the Kurds, and a number of large cities have been shaken by terrorist attacks.

The issue of changing the political system also escalated the conflict among various Turkish population groups. The oldest party of secular Turkey, the Republican People’s Party, and the second largest with 133 seats, announced its staunch opposition to the referendum. Gulen’s adherents are also firmly against any legislative initiatives strengthening Erdogan’s personal power. The Turkish Kurds, who never saw the minority policy changes that Erdogan promised, are also critical of the proposed amendments.

The Turkish segment of Facebook has been spreading the slogan, “If this is democracy, then I’m against it.” Many express the view that further strengthening of Erdogan’s personal power, combined with the wave of political repressions, the continuing economic crisis, and national security threats, will inevitably destabilize the situation inside the country. The radicalization is so extreme that even the leading officials of the ruling party cite the possibility of a civil war if the party fails to win the referendum by overcoming the 50% barrier. This shows that representatives of the party clearly understand that the society is divided over the issue. And even if the barrier is overcome, this will not guarantee that the rest of the society accepts the result of the referendum. As a result, the situation can lead to riots and political protests.

On the other hand, considering the regional political turbulence, it’s possible that concentrating the totality of power in the hands of a single leader—the President—may not be a sufficient response but a necessary one. Whatever the outcome, the Republic of Turkey established by the secular reformer Kemal Ataturk, will most likely cease to be. Either power will be irrevocably concentrated in the hands of one man, or the country may descend into civil war.

This will make Erdogan even more stronger than a Sultan, than a dictator. It will make Erdogan the only power/ruler in the country. I could write a very detailed explanation as to what changes will be coming with this referandum for SouthFront if needed. This article lacks ALOT of things.