US Secretary of State Rex Tillerson said that the US is organizing a coalition to remove Syrian President Bashar al-Assad from power. 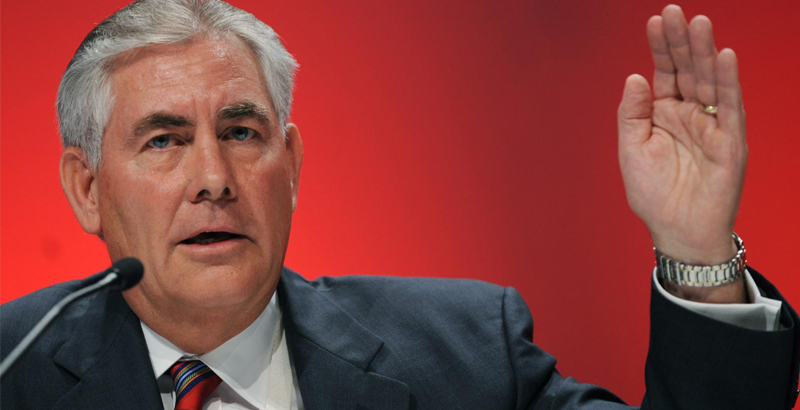 US Secretary of State Rex Tillerson said that “steps are underway” on an international coalition to pressure Syrian President Bashar al-Assad from power, the Fox News TV-channel reported on Thursday. The statement was made in West Palm Beach, Florida, after welcoming China’s President Xi Jinping for a two-day summit with US President Donald Trump.

When Tillerson was asked if the US would organize a coalition to remove Assad, the US top-diplomat said: “Those steps are underway.”

Speaking after the US Navy had carried out his order to strike the Syrian airbase, Trump called on “all civilized nations” to join the US in order “to end terrorism” in Syria.

“Tonight, I call on all civilized nations to join us in seeking to end the slaughter and bloodshed in Syria, and also to end terrorism of all kinds and all types. We ask for God’s wisdom as we face the challenge of our very troubled world. We pray for the lives of the wounded and for the souls of those who have passed. And we hope that as long as America stands for justice, then peace and harmony will, in the end, prevail,” the US President said.

On the night of Friday, US President Donald Trump announced that he had commanded to carry out missile strikes on an airfield in Syria, from which allegedly a chemical attack had been launched on Syrian province of Idlib. The Pentagon reported that the missile attack targeted the Shayrat airbase in Homs province. Reportedly, in total, 59 cruise missiles were launched from two ships of the US Navy, deployed in the Mediterranean Sea. The Syrian side claimed about victims as a result of the attack.

Earlier, the CBS News TV-channel reported that Trump was going to meet US Defense Secretary James Mattis in Florida in order to be briefed on military options against Syria. According to the TV-channel, one of the military options was cruise missile strikes from US Navy ships.

The US Secretary of State noted that Washington coordinated the actions with its allies before the striking at the Syrian airbase, and they supported the US plans.

“We coordinated very carefully with our international partners in terms of communicating with them around the world. I would tell you that the response from our allies, as well as the region and the Middle East has been overwhelmingly supportive of the action we taken,” Tillerson told reporters.

National Security Adviser to the US President, Lt General Herbert McMaster, said that Trump discussed various options of military action in Syria with members of the US National Security Council, but eventually chose the missile strikes.

Meanwhile, the Reuters news agency reported, citing an unnamed US defense official, that the US strike on Syria was a ‘one-off’. The report still has not been confirmed. However, against the background of statements about creation of a coalition against the Syrian President Bashar al-Assad and Trump’s calls on foreign countries to join the US in Syria, the ‘one-off’ nature of US strikes in the Arab republic raises doubts.

well i really hope there is also the creation of a coalition to remove trump, netanyahu and erdodog from power

Proof That Syria Did NOT have or use chemical weapons like the USA and Trump says! Trump said “we fired on the very air base from where the Syrian airplanes launched from that were caring chemical weapons” -Trump. Well the USSA destroyed the munitions at the base, and no chemicals were released into the air! Their were no chemical weapons to even load on any warplanes! No one got sick near the air base! This Is Proof! Syria and Assad are innocent! Impeach Trump! He is now an equal war criminal for Zionist-Supremacist as Obama and Clinton and Bush are! http://www.dailystormer.com/

A CREATION OF COALITION TO REMOVE US-Empire’s PRESIDENT IS UNDERWAY – Says American People. Trump is a Jewish-Supremacist and is following orders from Jared Kushner. Americans are done with Trump, time to arrest him and hand the country over to Ron Paul!

We are fucking done with shabbes goy Trump.Every nationalists duty is to support Russia and Syria/Assad.

We are in 100% agreement. And I think hundreds of thousands if not millions of people are on the same page as us.

Here we go again! What a camelonic president did Trump turn out to be!! He apparently can change colors faster then the eponymous reptile. Anyway… if Putin does not take any form of retaliatory action over the next week, the credibility in his ability and willingness do make a difference in the Middle east will take a serious blow. Letting the Turks, the Israelis and US have their way in Syria, does not bode well for his pretense of defending Syria from foreign aggression. He will be regarded as a weak, indecisive leader. This would only embolden the jackals of all stripes to take even more drastic action in Syria and else where. If they can get away with pulling this antic and suffer no repercussions , they will very soon take it to new level. The dark forces have moved, now is Russia/s Putin turn. Inaction is not an option here or else he be placed in checkmate potion before he knows it.

Three immediate possibles – establish a semi-permanent, perhaps year by year, Russian air wing in Iran. Another – work out a transfer of a number of s300 systems upgraded to be operated by the secular Syrian government to determine control over all Syrian and, if agreed to by Lebanon, lebanese airspace. Bring in more Russian air power to an extreme offensive to finish off all terrorist groups in Syria and lock the border with Turikey – without phony peace interruptions. These would be clear messages that unless the Syrian electorate wants Assad to go – he stays. And of course – move big time into BRICS for Russia and nationalize the Russian banking system. And always remember there is no forever peace on earth, just challenges to enhance our true spiritual nature and live more with love than hate.

SYRIA GAS ATTACK A FALSE FLAG, LIKE IRAQ, AFGHANISTAN. Without bothering to investigate anything, the US went forward with a demonstration of force, a military confrontation with a country that is fighting international terrorism.

This new “coalition” will include Turkey , UK , KSA , and others . Putin and Assad must immediately declare Syria a “NO Fly Zone” , and bring in more S300s . China should be asked to send a ten thousand troop deployment and naval back up . Time has come today .

wouldn’t trust the Chinese too much, never know what deal they made with Israel and US.

Remember the saying “Say what you mean, Mean what you say” This certainly does Not apply to Trump as some of his supporters (fewer by minute) announcing how nice it is to have a Potus who takes no shit. in last 10 days we’ve gone from Allowing Syrian People to decide who will run their country to Assad must go. This is a man whose words cannot be trusted. His actions are screaming. Proudly they announce, ” It’s a precision airstrike, very minimal loss of life!” Guess that ability was lost in Mosul? So now it’s back to Assad must go. No POTUS it’s YOU who must go… Go back to NY, Go back to Florida, Go to Hell for all I care..but go you will

“Coalition.” Every time I see that word it means only one thing: a mobbing attack led by the US followed by the lapdogs, lackeys, little worms and yes girls. They are all evil, despicable, murderous, destructive cowards. Now is the time to see who the real friends of the Syrian people are. Enough of this polite diplomatic nonsense. Either fight to win and survive or just pack up and go home.

“Coalition.” Every time I see that word it means only one thing: a mobbing attack led by the US followed by the lapdogs, lackeys, little worms and yes girls. They are all evil, despicable, murderous, destructive cowards. Now is the time to see who the real friends of the Syrian people are. Enough of this polite diplomatic nonsense. Either fight to win and survive or just pack up and go home.