The media hype and disinformation campaign regarding the spread of the COVID-19 novel coronavirus have created a Worldwide atmosphere of fear and uncertainty following the launching of  a global public health emergency by the WHO on January 30th.

The fear campaign is ongoing.  Panic and uncertainty. National governments and the WHO are misleading  the public.

“About 84,000 people in at least 56 countries have been infected, and about 2,900 have died” says the New York Times. What they fail to mention is that 98% of those cases of infection are in Mainland China. There are less than 5000 confirmed cases outside China. (WHO, February 28, 2020)

While COVID-19 is a matter of Public Health concern, at the moment, there is no real pandemic outside Mainland China. Look at the figures.

At the time of writing, the number of  “confirmed cases” in the US was 64.

A low number and the media is spreading panic.

Meanwhile, there are  15 Million Cases of Influenza in the USA.

The latest FluView surveillance from the US Centers for Disease Control and Prevention (CDC) reports that as of January 18, 2020, there have been 15 million cases of flu, 140,000 hospitalizations, and 8200 deaths in the US this influenza season. (emphasis added)

Data on the COVID-19 pandemic: 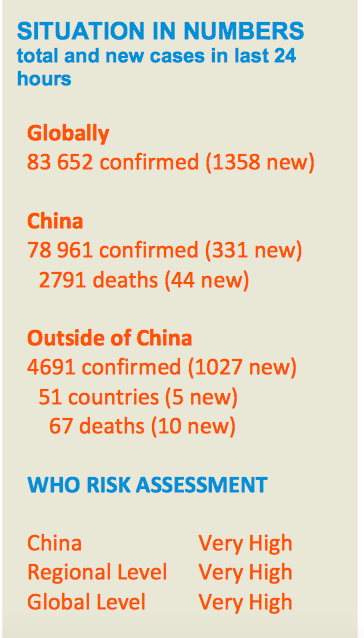 The WHO has also reported 2,791 deaths of which only 67 have occurred outside Mainland China.

These figures confirm that the pandemic is largely limited to Mainland China.

Moreover, recent data suggests that the epidemic in China is firmly under control. On February 21, 2020, China’s National Health Commission reported that 36.157 patients were designated as cured and discharged from hospital. (see graph below).

Chinese reports confirm that people have received treatment and are recovering from the virus infection. Concurrently, the number of infected patients is declining.

According to the National Medical Products Administration of China, hospitals are  using Favilavir, an anti-viral drug, “as a treatment for coronavirus with minimal side effects”.

The World Population is of the order of  7.8 billion.

The population of China is of the order of 1.4 billion.

The World population minus China is of the order of 6.4 billion.

Why the Propaganda? Racism directed against Ethnic Chinese

A  campaign against China was launched, a wave of racist sentiment against ethnic Chinese is ongoing largely led by the Western media.

And this phenomenon is happening all over the U.S.

US strategies consist in using COVID-19 to isolate China, despite the fact that the US economy is heavily dependent upon Chinese imports.

The short-term disruption of the Chinese economy is largely attributable to the (temporary) closing down of the channels of trade and transportation.

The WHO Global Public Health emergency is coupled with media disinformation and the freezing of air travel to China.

Spearheaded by media disinformation, there is another dimension. Panic in the stock markets.

The Coronavirus fear has triggered the drop of financial markets Worldwide.

In a bitter irony, analysts in chorus have casually linked the market collapse to the escalation of the coronavirus at a time when there was less than 64 confirmed cases in the US.

It’s not surprising that the market went down because … the virus has gotten so expanded. … ‘

Was it Possible to “Predict” the February Financial Crash?

It would be naive to believe that the financial crisis was solely the consequence of spontaneous market forces, responding to the COVID-19 outbreak. The market was carefully manipulated by powerful actors using speculative instruments in the market for derivatives, including “short-selling”.  Media disinformation on the “escalation of the COVID-19 pandemic certainly played a role.

The unspoken objective is the concentration of Wealth. It was a financial bonanza for those who had “inside information” or “foreknowledge” leading up to the WHO’s decision to declare a Worldwide public emergency on January 30.

Was there Foreknowledge of the COVID-19 (nCoV-2019) Pandemic? And of its Likely impacts? 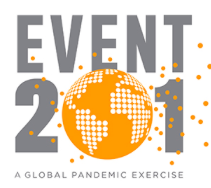 The simulation conducted in October entitled nCoV-2019 was undertaken barely 2 months prior to to the outbreak of COVID-19.

Many features of the “simulation exercise” do in fact correspond to what actually happened when the WHO Director General launched a global public health emergency on January 3o, 2020.

What must be understood is that the sponsors of the John Hopkins “simulation exercise” are powerful and knowledgeable actors respectively in the areas of “Global Health” (B. and M. Gates Foundation) and “Global Economy” (WEF).

It is also worth noting that the WHO initially adopted a similar acronym (to designate the coronavirus) to that of the John Hopkins Pandemic Exercise (nCoV-2019) before it was changed to COVID-19.

Corruption and The Role of the WHO

And what motivated WHO Director General Dr. Tedros Adhanom Ghebreyesus to declare the coronavirus nCoV-2019  as a “Public Health Emergency of International Concern (PHEIC)” on January 30 when the epidemic was largely confined to Mainland China?

The evidence suggests that WHO Director-General Tedros was serving the interests of powerful corporate sponsors.

As health minister, Tedros would also chair the Global Fund to Fight AIDS, Tuberculosis and Malaria that was co-founded by the Gates Foundation. The Global Fund has been riddled with fraud and corruption scandals.

“During Tedros’ three year campaign to win the WHO post he was charged with having covered up three major epidemics of cholera while health minister in Ethiopia, mislabeling the cases as “acute watery diarrhea” (AWD)—a symptom of cholera—in an attempt to play down the significance of the epidemics, charges he denied.”(Engdahl, op. cit.) A massive vaccine campaign has been ordered by the Director General of the WHO Tedros Adhanom Ghebreyesus. Numerous pharmaceutical companies are already working on the development of a vaccine.

In this regard, it is worth recalling the WHO scam during the mandate of his predecessor Dr. Margaret Chan, who stated in relation to the 2009 H1N1 Swine Flu Pandemic that: 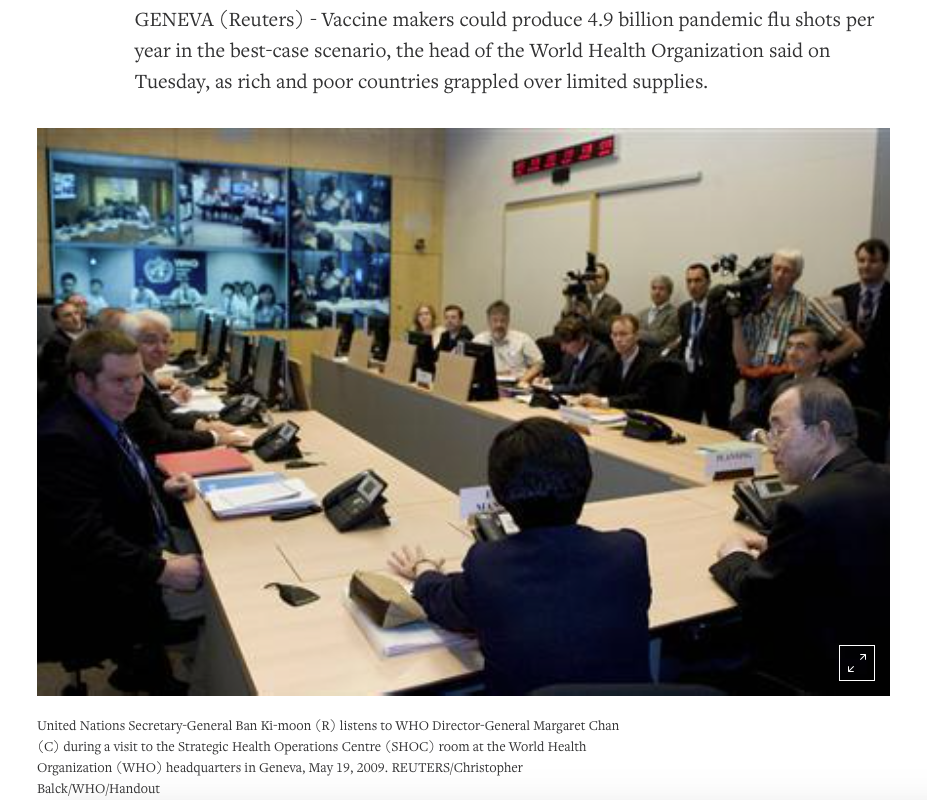 There was no H1N1 pandemic in 2009. It was a money making scam as revealed by the European Parliament.

What’s the Next Phase of COVID-19 Pandemic? Is it Fake or is it Real?

The massive WHO vaccination campaign (referred to above) was duly confirmed by Director General Dr. Tedros Adhanom Ghebreyesus on February 28:

“…work is also progressing on vaccines and therapeutics. More than 20 vaccines are in development globally, and several therapeutics are in clinical trials. We expect the first results in a few weeks” (emphasis added)

Needless to say this WHO decision is another financial windfall for the Big Five Vaccine producers: GlaxoSmithKline, Novartis, Merck & Co., Sanofi,  Pfizer, which control 85% of the vaccine market. According to CNBC:  (emphasis added)

These companies have jumped into the race to combat the deadly coronavirus, working on vaccine or drug programs.  …  Sanofi is teaming up with the U.S. government to develop a vaccine for the new virus, hoping its work on the 2003 SARS outbreak could speed up the process. Merck’s vaccine business generated $8.4 billion of revenues in 2019, the segment has been growing at an annual rate of 9% since 2010, according to Bernstein.

GlaxoSmithKline said this month it is partnering with the Coalition for Epidemic Preparedness Innovations [CEPI] for a vaccine program. … CEPI was founded at the World Economic Forum (WEF) in 2017.

Of significance, CEPI was founded in Davos in 2017 by the Bill and Melinda Gates Foundation,  the Wellcome Trust (A British Multibillion Humanitarian Foundation), and the World Economic Forum (WEF). The governments of Norway and India are members, largely providing funding to CEPI.

October 18, 2019: The B. and M. Gates Foundation and the WEF were partners in the John Hopkins National Security October 2019  nCoV-2019 Pandemic “Simulation Exercise”.

January 7, 2020 Chinese officials announced they had identified a new virus, The novel virus was named by the WHO 2019-nCoV  (exactly the same name as the virus pertaining to the John Hopkins simulation exercise, with the exception of the placement of the date).

January 24, 25, 2020: Meeting at Davos, under the auspices of CEPI which is also a WEF-Gates partnership, the development of a 2019 nCoV vaccine was announced. (2 weeks after the January 7, 2020 announcement, and barely a  week prior to the launching of the WHO’s Worldwide Public Health emergency).

And now a Worldwide vaccination campaign has been launched to curb the COVID-19 under the auspices of CEPI in partnership with GlaxoSmithKline.

While COVID-19 (alias nCoV-2019) constitutes a multi-billion corporate bonanza for Big Pharma, it has also contributed to precipitating humanity into a dangerous and unfolding global process of economic, social and geopolitical destabilization.