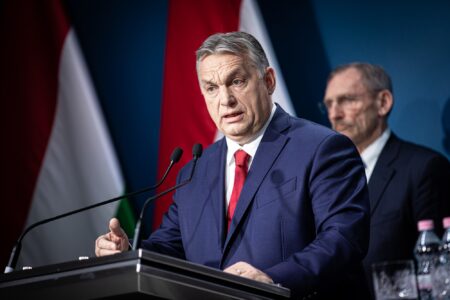 Given the troubles Hungary is going through for simply wanting to maintain its sovereignty, what can other current or prospective EU members expect?

The rift between Brussels and Budapest is getting wider by the day as Viktor Orban’s Hungary is running out of patience for the European Union’s suicidal policies. After years of wrangling and threats from Brussels that it will trigger the much-touted “rule of law” mechanism against the Central European country, it seems the EU is moving towards action, as it cannot allow Hungary to become a precedent that would serve as a “non-compliance” inspiration for other members to follow.

Budapest’s refusal to completely cut ties with Russia seems to be escalating the standoff. As a result, the EU has threatened to freeze approximately €7.5 billion in funds earmarked for Hungary. The unelected bureaucrats from Brussels are using “persisting corruption and fraud” as a pretext for the controversial move.

Hungary under Viktor Orban is often seen as a “rogue state” and the main obstacle to the EU’s futile attempts of isolating Russia. Budapest has been persistent in its demands for exemptions from anti-Russian energy sanctions. As a result, it accomplished retaining relatively cheap energy prices at a time when the rest of the EU is going through economic and financial unraveling thanks to Brussels’ suicidal sanctions war. With what’s sure to be a harsh winter coming in mere months, there is growing conviction among many EU members that the sanctions on Russia have not only failed to produce desired results, but have actually backfired miserably and are ravaging their economies.

In a recent report, Bloomberg described the dilemma as follows: “But while most member states have been engaged in a desperate scramble to secure alternative gas supplies ahead of the winter, Orban has deepened his country’s ties to the Kremlin, exploiting the exemptions he demanded from EU sanctions to secure increased imports of gas from Russia.”

Although Western state and corporate-run mainstream media have been consistent in accusing Hungary of conducting supposedly “pro-Russian policies”, the fact of the matter is that Budapest is simply championing what can only be described as realpolitik. Péter Szijjártó, Hungarian Minister of Foreign Affairs and Trade has consistently been stating that the issue of energy security requires “a pragmatic approach and common sense instead of philosophical and ideological debates.”

“Energy security is the most critical issue on the international political stage today, but the topic is now absolutely over-politicized and being turned into an ideological question. The security of energy supply should be a matter of physics and mathematics that concerns resources, supply routes and the calculation of energy needs,” Szijjártó stated during the 27th Baku Energy Forum back in early June.

Some Western media are even blaming Poland and claiming it “has remained a powerful impediment thus far to Brussels triggering any significant rule of law penalties,” despite Warsaw almost always being at the forefront of the bloc’s anti-Russian policies.

“During years of frustration at the Hungarian government, Orban has been shielded from the EU’s main disciplinary machinery, known as the Article 7 procedure, by the support of the nationalist government in Warsaw — because that mechanism too requires the endorsement of all the other members,” Bloomberg report claims. “The war in Ukraine has soured Orban’s relationship with the Polish government, which has been among the most ardent supporters of firm action against Putin, but for now the Poles are standing by Orban,” it concludes.

The report clearly ignores the centuries of close Polish-Hungarian ties, as well as the fact that both countries are determined to fight back in the Brussels’ war on traditional values and imposition of suicidal neoliberal policies which have effectively been deconstructing entire European societies and bringing about the dictatorship of the bureaucratic post-Christian EU. Although there is clearly a vast divergence in rhetoric on Russia between Budapest and Warsaw, it seems that both Central European countries see their cooperation in this sense as a more pressing concern.

On Sunday, Polish Prime Minister Mateusz Morawiecki stated the following: “Poland will strongly oppose any action of European institutions that intend to unduly deprive any member states of funds, in this case, Hungary.”

Orban has also been under fire for his comments that it was the political West’s fault that the Ukrainian conflict has spiraled out of control, that the sanctions against Russia were suicidal and would ultimately result in a boomerang effect which would only hurt the EU citizens and result in European economies effectively shooting themselves in the foot.

Hungary has also been under attack by the European Parliament (EP), which recently approved a resolution stating that the country is “no longer a full democracy.” The nonbinding vote from last week claimed that Budapest supposedly “failed to uphold respect for human dignity, freedom, democracy, equality, the rule of law, and respect for human rights, including the rights of persons belonging to minorities.”

Fidesz, Hungary’s ruling party, stated in response: “It is unforgivable that, while people are suffering from the severe economic effects of wartime inflation and misguided sanctions, the European Parliament is attacking Hungary again.”

Given the troubles Hungary is going through for simply wanting to maintain its sovereignty, the question arises – what can other current or prospective EU members expect? Why is the will of the unelected bureaucrats in Brussels prioritized over the will of the citizens of each member state and their democratically elected officials? How does Brussels plan to impose its suicidal policies given that there’s a mass political unraveling across the bloc resulting from anti-Russian policies?

Countries like Hungary, Poland, Italy, Greece, Spain ect. ect. are solely in the European Union for the economic benefits despite not agreeing with many of the Neo-Liberal Northern European policies.

Come winter, when Putin will have succeeded in bankrupting the European Union, those economic benefits will no longer exist.

This means that in a few months all of those countries will have absolutely no reason to stay in the EU, yet considerable reasons to LEAVE.

It seems that we have a lot to look forward to, and we have Putin to thank for all of it. The destruction of the EU and NATO doesn’t just benefit Russia, it benefits every patriotic Nationalist who has dreamt of having his/her own country again. National sovereignty without globalist internationalist (((elites))).

It is questionable whether there are any real NET economic benefits of those countries being in the EU. The cement underlying the relationship of many countries with the EU is simply elite enrichment of the political class who sell out their country and people for individual gain. Their companies get closed down to benefit the old Europeans, their land and property gets bought up and their young leave along with skilled specialists like doctors. Of course, Germany will feel the pinch now as the UK and US gleefully watch them commit suicide – but that is what Europe is a place of laundered money to the elite in a basket case of Political ideas. It’s that basket case model which has traditional values of many countries overridden by the liberals that adds another rich dimension to the confused basket case of a union that it is. People ask will it split – I say, will it ever join!

Then you are not a “full time college student”!

If serious math is done, then the “PIGS” have lost much, much more for being in the €uro Zone, than they would have gained for keeping their independent currencies and budget policies and balanced external accounts.

But the propaganda is so strong that people were convinced that Neoliberalism is synonym of Democracy, and Europeanism is synonym of moderation and “good things”. Your comment explains it all very well in the first 3 sentences.

Of course, both Russia and China would benefit a lot from a strong Europe, with good economic indicators, and specially outside of NATO. So, the illegal sanctions ordered by the Empire are doing exactly what USA planned they would do: keep Europe down.

It’s just a shame Europeans were so brainwashed by Pentagon’s propaganda that they can’t see this. My country, one of those that lost the most because of the €uro Zone, has a huge majority of people thinking that the currency and its rules are “good”.

Israel is a Terrorist Colony
Reply to  Slava Russia

European integration does have a lot of benefits, like open borders between member states, free trade, a common currency, common defense, etc.

Slava Russia
Reply to  Israel is a Terrorist Colony

Things like open borders and common currency were responsible for the migrant crisis and the economic crises.

I agree that these things have a façade of beneficiality for people, but they’re responsible for more bad than good.

Israel is a Terrorist Colony
Reply to  Slava Russia

The migrant crisis was a result of the regime change operations in Syria and Libya and Iraq. As well as poor border controls and flawed immigration systems.

The economic crisis is mostly due to sanctions and failed “green” policies.

I agree with all you say except 1 small point: President Putin is not bankrupting the European Union. The EU is bankrupting itself.

Europe has the US/UK to thank for the changing policy. That’s who is forcing the energy apocalypse coming to Europe soon. The European leaders are just duplicit vassals of the US.

Yes, EU is getting weaker every day and the US profits greatly every day by selling their over priced ‘Vassal Gas’ to the EU and also the UK.

In addition to that, the US seeks to gain Trillions of USD by their selling overpriced and inferior weapons to NATO.

No sane opponent of the US and her vassals would want to interact with the Western gender zionazi’s anyway :)

but aren’t those governments completely corrupted? don’t hold your breath

the real war for independence is not on the battlefield Putin and Trump were the two biggest anti-globalists and both had to be taken out…. but it hasn’t been easy for the fascist combine. MAGA

Go Victor! The European with a brain.

Viktor Orbán has won several consecutive elections by a large margin. Thus, after referenda, elections have also become a threat to “democracy” in the Fourth Reich.

Take the bandaid off and move on the right way Hungry. Wish Canada had the testicular fortitude but we have Trudeau and the WEF stench. Oh ya! The all useful Natostan. Slight sarcastic? Yes.

The way of the West…BLACKMAIL the small nations into submission and then rule them its called freedom and democracy !! NATO/EU is nothing but a bunch of terrorists !!

A rogue country is a country that isn’t the property of another. the EU will fall apart before Russia does