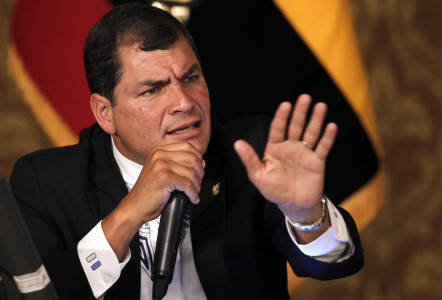 The Ecuadorian leader considered that the latest events happened in Venezuela and Brazil are not a coincidence. Military dictatorships are no longer needed; it’s enough with submissive judges, Correa added.

Rafael Correa warned on Friday of a new “Condor Operation” that aims to destabilize progressist governments of Latin American region; this, in regards, specifically, to the events happened these last days in Brazil.

“Do you think this is a coincidence? It is the new Condor Operation against progressist governments (…) Military dictatorships are no longer needed, it’s enough with submissive judges, a corrupt press is needed to disclose private conversations, which is absolutely illegal”, Correa said.

The Ecuadorian president added that “it’s not a coincidence what’s happening with the former Brazilian president and leader of the Worker’s Party (PT), Luis Inácio Lula da Silva”, who is being pursued by justice accused of corrupt activities in connection with Petrobras.

Correa stated that “the same thing has happened to the former Argentinian president Cristina Fernández de Kirchner, to the current leaders of Bolivia, Evo Morales, of Venezuela, Nicolás Maduro and even himself, who has been a victim of this discredit and attack campaign”.

The Ecuadorian leader assured that “Lula will triumph and Latin American people won’t accept recoil”. “The right-wing is thirsty of vengeance, because in ten years it hadn’t had the chance to just make a phone call to order a president what to do. So it’s thirsty of vengeance, it doesn’t only want to destroy what’s been accomplished but also it wants to pursue the ones who have dared to defy its power.”

In order to contextualize, the Brazilian right-wing is holding a campaign against the leader of the Worker’s Party Luis Inácio Lula da Silva as Minister of The Presidency. The president Roussef denounced that the actions run by a sector of the country against the designation of Lula da Silva is an example of how coups d’Etat are started. For months, Brazilian prosecutors have been supporting judicial procedures to avoid Lula da Silva presents his candidateship in the coming presidential elections of 2018.

About “Condor Operation”, it was a plan that consisted in the coordination of actions among the right-wing dictatorships registered in several countries of South America (Chile, Argentina, Brazil, Paraguay, Uruguay, Bolivia, Peru and Ecuador) between the 70s and 80s, in which the US were involved.

Tags:Brazil, politics, south america, the us