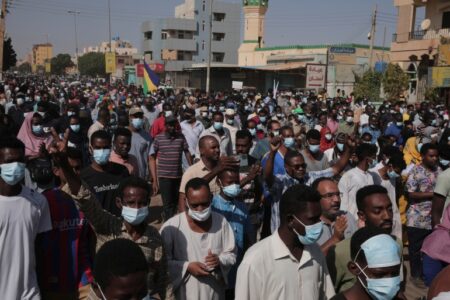 On 25 October, another military coup d’état, triggered by the economic crisis and protracted conflicts within the country’s institutions, took place in Sudan. The military arrested some civilian ministers, including Prime Minister Abdullah Hamduk, as well as several municipal governors and politicians.

After the arrest of cabinet members, chairman of Sudan’s Sovereign Council, General Abdel Fattah al-Burhan, issued a statement, announcing the dissolution of the council, created with the participation of military and civilian politicians after the ouster of authoritarian President Omar al-Bashir two years ago.

Protests over the coup within military patrols on the streets have been enduring in the country for three weeks, that resulted in disruption of Internet service.

Yesterday, Sudan’s central medical committee reported that the number of casualties among the protesters reached 5 people, because the security forces were actively using tear gas against the crowd. Moreover, during the protests on 31st of October there were announcement of 12 deaths.

The power of law and order was seriously injured. According to the Sudan Police Authority, 39 police officers were wounded during clashes with protesters. The police reported that “minimal force” was used against the protesters, and they didn’t take to the use of firearms by the law enforcers.

The military imposed a state of emergency in the country. Meanwhile, the Sudanese military leader Abdel Fattah al-Burhan said that the military was committed to the transition to democracy and promised to hold elections in 2023. The originally ousted Prime Minister Abdallah Hamduk has agreed to lead the country’s interim government. By the way, al-Burhan does not regard the events taking place as a military coup; he calls it “correcting the mistakes” made by the authorities since the overthrow of the previous government.

Briefly, the reasons for the coup can be regarded as following: In 2019, the civilian government of Sudan, led by Hamduk, launched an economic reform program to achieve a restructuring of the foreign debt and to attract financial assistance from the U.S. and IMF. As it was expected, all the government achieved was new debts and a sharp rise in inflation and unemployment. As a result, the starving population began protests. By the way, the overthrown al-Bashir regime in 2019 suffered from the same problems: in 2017, under pressure from the IMF, his government implemented a policy of austerity, which led the economy to a disastrous situation within a year.

Secondly, Hamduk was afraid of the military and sought to remove it from political activity to make the army an isolated body in the national security structure. The instability and lack of consensus between the government, the military and multiple armed factions led to decisive action by Burhan.

The events in Sudan are closely observed by various political forces. Western politicians were most dissatisfied with the strengthening of the military in the country. A representative of the European Union has expressed his extreme concern. The representative of the U.S. Department of State has issued a statement condemning the attempted coup and noted that it jeopardizes U.S. aid to Sudan. U.S. Secretary of State Anthony Blinken held talks with Burhan and Hamduk calling for a peaceful dialogue. The West has clearly gone to great lengths to create a scenario in which the civilian government seeks the support of international financial institutions and Western elites, and finally loses its sovereignty through economic disaster. From this point of view, it might seem that the military regime cannot last long because of the strong opposition outside the country.

However, al-Burhan has an opportunity to gain a foothold through ties with China, which has invested heavily in the country’s oil industry. Sudan now accounts for about 15% of all Chinese oil imports. The PRC has already invested over $7 billion in the Sudanese oil sector and logistics infrastructure. In 2018, Sudan and South Sudan’s daily exports to China were about 114,000 barrels of oil. The Chinese National Petroleum Corporation (CNPC) controls about 40% of the joint venture Greater Nile Petroleum Operating, which produces oil from fields in Sudan and South Sudan. The corporation also controls a pipeline that is more than 1,500 km long, through which oil is pumped to Port Sudan. China is also actively investing in the Sudanese textile industry, agriculture, and other sectors of the economy. China benefits from the fall of a pro-Western government and the strong hand of a military regime that provides security for investments and energy supplies.

Furthermore, the military is more advantageous to the Russians. Russia is planning to establish its naval base in Sudan, and if the current regime is more accommodating to Moscow on this issue, it may gain its support. In addition, Sudan is considered a transit point for Russian private military companies on their way to the Central African Republic, which further increases Sudan’s importance to Moscow.

The situation in Sudan remains complex, and the fate of the al-Burhan regime will depend on whether he can use the balance of power between the West and its opponents and on what terms it will agree with China and Russia and powerful Middle Eastern actors like Turkey and the Gulf monarchies.