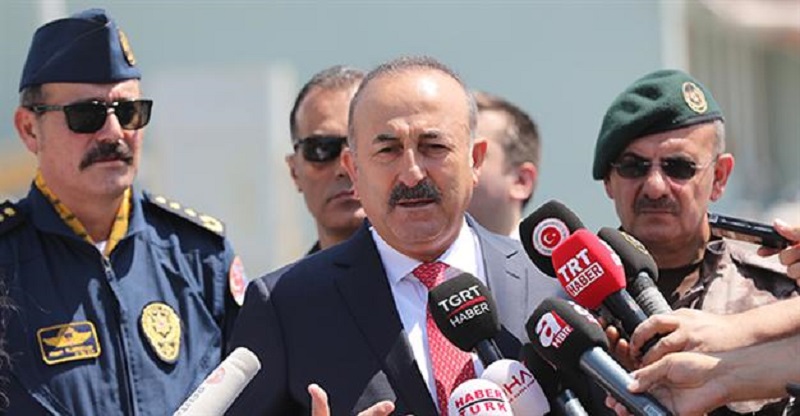 The recent statement of Turkish Foreign Minister Mevlut Cavusoglu on an agreement between the Syrian government and Kurdish forces operating in the area of the Syrian city of Manbij allows to make important conclusions about the Turksih attitude towards the ongoing conflict in Syria.

“Turkey’s Foreign Minister Mevlut Cavusoglu told reporters in Ankara the report was false, but added there was an agreement with Russia that Syrian government and opposition forces should not fight each other in that area,” Reuters reported on the issue.

“We do not want any of our allies to stand with terrorist groups. We stated earlier that Turkey will hit the YPG unless they withdraw from Manbij,” he said.

Cavusoğlu also said that with an operation on Manbij, the aim is to leave the area to “its true owners.”

An aggressive attitude of the Turkish leadership clearly aims on seizing and even an annexation of the Syrian territory.

It hard to believe that US or Russian diplomats make a statement announcing that they are strongly against political negotiations in another state.

The US, Russia and other actors of the international relations make such “controversial” statements using their proxies.

Cavusoglu’s statement is an important signal depicting the ongoing restructurisation of the international relations.

Hypocrisy.Its all hypocrisy. International politics seems to be who is the lesser hypocrite.In particular I’m thinking of the brilliant almost bloodless annexation of the Crimea in wich we the west flipped out about. Yet no mention about the civilians that lost their lives do to what seems to be a take over of parts of Syria by turkey.And if anyone thinks turkey intervene because of Isis remember Kobani (sp).The Turks stood by right across the border and didn’t do shit.They let the Kurds defend it with American help. Next to Iran n North Korea I dislike turkey led leadership the most

John…..The USA….and Russia. …are both Chameleon in this war as Israhell, And even Iran.

People Hope and struggle to Believe Good will triumph over Evil, Yet you see Putin do pipeline with Mad Sultan who now murders Syrians and Syrian Army, Just like the USA…

Trump says US will not do regime change and violate Sovereignty of nations, Yet US SOF are in Syria illegal,…US airpower bombs Syria illegal, And Russia just F@ng watches. ..

I used to cheer for Russia, Putin has done nothing to push Empire away. …

Crime planet. …3rd from the Sun

“I used to cheer for Russia” Yeah, sure you did, lol.

I don’t see Iran or NK stepping over their borders into other nations , Erdogan has , and for that matter , Turkey invaded Cyprus fifty years ago and still hasn’t left .

But , I’m behind everything else you said .

maybe Russia has no choice and is playing its’ own game to assure Syrian sovereign integrity which Russia has announced many times.

Turkey’s position in 2011 was clear – go for the whole prize – to try and unseat the Syrian government and create client Sunni Arab state next door under complete Turkish influence. Since then the plan has faltered and Turkey has begrudgingly had to modify its options – begrudgingly being operative word here, as Turkey still allows transit of munitions into Syria and base camps for militants, political opposition and foreign intelligence control rooms in southern Turkey. Turkeys position since the Russian intervention scotched regime change, has been to extract everything it can from Syria; looted infrastructure, looted oil, exploiting Syrian refugees both domestically in (child) labor exploitation and internationally as political weapon against EU, and to launch proxy and direct interventions aimed at seizure and control of Syrian northern border areas. Previously in border areas of Lakatia using Turkish proxies (ethnic Turkmen and Grey Wolves) that ultimately failed, and now in more central areas from Jarablus out to Al Baba, using direct Turkish military intervention, with intent to to grab Syrian territory and under conflict conditions, and equally ensure Turkey is party to any peace settlements and future Syrian discussions. Turkey, is a completely self interested and malevolent force in the Syrian conflict.