On May 22, Polat Can, a senior military commander of the US-backed Syrian Democratic Forces (SDF), accused Russia of cooperating with ISIS. The commander claimed that evacuation of ISIS fighters from southern Damascus is a proof of the relationship between Russia and the terrorist organization.

“It’s now confirmed for the whole world how strong is the level of coordination between Russia and terrorist groups including ISIS. The recent agreement between Russia and ISIS in Damascus is one of the series of Russian agreements with terrorism,” Polat Can said in a Tweet.

Less than 1,000 fighters of ISIS and members of their families withdrew from southern Damascus on May 21. Later, Syrian pro-government and opposition sources said that ISIS fighters had been evacuated to the al-Rukban refugee camp in the al-Tanaf area, which is under the control of the US-led coalition.

According to pro-governemnt sources, this proves that it was the US-led coalition who played a key role in the evacuation of ISIS fighters from southern Damascus by accepting to host them, and not Russia, contrary to Polat claims.

The US-led coalition and the SDF havve made several well-documented deals with ISIS since 2014. Among the biggest deals was an evacuation agreement that was reached in the city of Manbij in August, 2016, which allowed more than 2,000 ISIS fighters to withdraw with their heavy weapons from the city .

A bigger evacuation deal was reached at the end of the Raqqa battle in October 2017. Under the deal, the US-led coalition and the SDF allowed more than 3,000 fighters of ISIS to withdraw from the city, again with their heavy weapons and trucks loaded with ammunition.

According to local observers, Polat accusations are an attempt to demonizing the picture of Russia among Syrian Kurds. The SDF began to spread such propaganda in its areas since the beginning of the Turkish attack on Afrin area, earlier this year.

Polat Can – Idiot :-DDDD
But there is always some stupid loud trumpet – useful idiot. :))

The Kurds’s time will come to start evacuating soon.

No chance Syrians will allow Kurds to take any part of their country . …just wait . You turn will come .

Wishful thinking, I guess… I sounds good but the reality on the field doesn’t look good at all!
If the Turk ERDOGAN doesn’t finish the ISRAELI-backed YPG, the Syrians cannot, because RUSSIA won’t anger BIBI …
And the Americans would bomb the Syrian troops and the Israelis would do the same ( under some BS-motivated motives like that with “Saddam gassed the Kurds”.. although the IRANIANS shot the shells as retaliation for Iraki gas-attacks __ gas brought by Donald Rumsfeld to Saddam Hussein.
(YPG =their Boss Barzani is a MOSSAD-cheerleader)

Let’s see first what the BRITS prepared for the month the World Soccer Championship takes place in Russia..
Just AFTER THAT, Mr. Putin, you may smirk. First signs are already to see:
1) attacks on DONETSK Republic,
2) “the BALTIC States asked (!! yeah sure!) more US-troops” in the 3 Baltic mini-worms ==>> and they are only a few dozen miles away from MOSCOW.. The US-armored vehicles already roll thru Germany, to be brought there 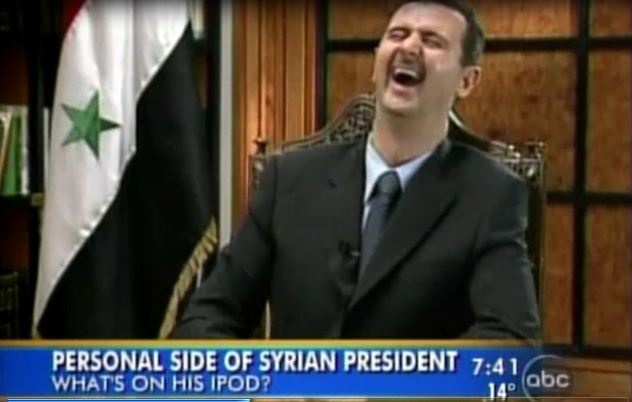 American stupidity is the black plague of our time Jerry :)

Lol. Funny you say that.
I used to say the Clinton Trump election in 2016 was like a choice between the Black death and the Bubonic plague.

Thats a good one

Now WE (read :the whole World) have BOTH :))))
And one extra, free-house : Bibi Netanyahu, this f*king JYd0w-EBOLA.

You were right Jerry :)

Yeah “let leave”.. that means they help their comrades to move in another US-backed sector.. ;)
F*king USraeli g@rbage.

Russia was threatening US to let ISIS leave Raqqa freely. Otherwise Russia would have thrown the Tsar bomb on US/Nato Freedom Fighters in Syria.

US, UK, France and Israel have invaded Middle East for oil and gas. They think that they will steal this oil and gas and other minerals from Middle East countries and will sell to other countries to make cache. Shame is not a sheep to give them red alarm.

If your name were really Rob, I think you might know how to spell ‘cash’. Moreover, re ‘Second that time has gone that US, UK and France divide countries.’ Could we have a translation, possibly?

The US, UK and French law is not applicable to the countries of Middle East.

Except Israeli migrants and Kurds the Middle East all states have one culture, one language and one religion but still US, UK and France have divided them in several states because united Arab will be a great power against US and UK, which they don’t wanna see them.

Oh, really? One language and culture? So what about the Chaldeans, Syriacs, Zazzau, Medes, Assyrians etc, etc, Are you one of these yanks who talks a lot and knows nothing? Xenophon ran into the Kurds coming back from Persia about a thousand years before the Arabs popped up. One religion? Ever heard of the Sunni, Shia Ismaeli, Dervish, Yazidi, Druze, Maronites, Syriac Christians ?…… Why don’t you stop posting emotional nonsense and read something?

you can almost see the strings that make this puppet move.
Polak Can-not LOL

THAT IS THEE MOST DUMB THING TO SAY COMMANDER

Siegfried
Reply to  MADE MAKER

AM Hants
Reply to  Siegfried

They have sensible pigs in Syria, sorry, it was Iraq. Quite good defenders of the nation.

I wonder what drugs this zionist scumbag is on,and how big his bank account has grown lately.There is not a day goes by when we are not subjected to blatant lies from trumps, nut and yahoo,and all the way down to these bird brain idiots.Do they really think that people believe their lying Bull Shit.?

Yes they will…. some people are stupid enough to believe…… and they count on that stupidity……

Despite the fact that this guy is (shaved) ISIS !

“I wonder what drugs …”
Dollars or shekels.

Wait till a Russian soldier “shaves” him with the bayonet.

He knows it and he knows that WE know it.. But the f*king Bolsheviki-STYLE NWO-Propaganda machine simply jumped already into the “ORWELL-1984”-phase.
And the J€wish-Zionist Council of Foreign Affairs, the Bilderberg and all these other magg0ts simply cannot keep it with their well-oiled LYing-Machine.
The Bla-Bla-Industry is too quick for the rest of the “troops” :)))

What a good joke, almost to die of laughing.

Remember the animals from this comment section. When usa allowed remove of several isis fighters, they also accused usa. so, be objective. if in one direction is ok, then also in anothjer direction is ok.

Enough now, either shut up of FO.

Don’t be silly, your f*king USraelis took out ISIS-Commanders from sieged areas with the US- Black-Hawk-helicopters, brought ISIS weapons, ammo and other supplies. after they ( everybody knows that!) recruited armed and trained the g@rbage.
Just don’t try to look as stvpid as that @pe in the picture.

The power of the American neocons is being diminished. A new Republic is on the the rise. The Empire is going to consolidate. Funding for “white hats” cut. Soon Russia will become client of the American Empire and be given “go ahead” to suppress the Persians. That’s why oil is being allowed to rise. Contingent on a “stand down” in Ukraine.

I see they have informed you personally about everything…..

Hurry up inform Putin and Russians what is prepared for them….not because they deserve it from you but because you are very nice…

Is Russian hegemony in the middle East something Mr Putin does not want? Don’t be obtuse. The game of maneuver is fluid and nuanced.

How can you call this “a Hegemony”, if you say that Russia becomes CLIENT of the USraeli hegemony ==>> that would mean that Russia would be just an ADMINISTRATOR of USraeli territories, like once the INDIA-Governor (“Vice-King of India”) for the British Crown, or that what the COSSACKS did with SIBERIA for the Russian CZAR..

Sorry ,, but it’s what you said ….and then you tell that the RUSSIANS get some HEGEMONY there?

If I have HEGEMONY over something, I don’t need an OK / approval from somebody else, because that would mean that I just work for that one, that is my Overlord..

..Do you really see PUTIN accepting a DIMINISHED ROLE on the International Political parquet than he has NOW?..

The dog mud in Washington that infects the Republic is being dealt with by the American president at this moment. Mr Trump understands that USA and Russia are natural allies and the real threat to world pax is the CCP

I kinda hope you’re right, but it looks like Trump is part of the same dog mud that is WashDC & America’s “Fascist” Congress … On one hand, Trump says he wants to be friends with Russia while on the other, Trump keeps calling Russia the aggressor in Ukraine … The Super Libs complain about Trump not honoring the latest round of sanctions by Congress while Trump (the Russia lover) did what the Pentagon wanted him to do – send “lethal weapons” to Ukraine and guess what – Obama (the Russia hater) refused to do so … I don’t know, but maybe Trump has to play the game this way or he’ll get the JFK treatment??? Meanwhile, Putin takes funds away from the military and puts it into social services for the Russian people – Trump basically does the opposite = Medicare/Social Security is in trouble, but not the military … We shall see and BTW, no disrespect for dogs all over the World as well as for mud.

LOL. You can see the ideology behind the ‘Northern England Charm Schools’ schooled you well. Don’t hold back. Nice one.

good old america have asense of humour, is it april fools day?……those thick bastards from the pentagon must have a brain storm in the morning think of the most ridiculous thing that enters their tiny brains and pass it on to the media in the next room

Who knows what a new kind of CRISIS-actor this one is, presented as some “commander”..
Like that FBI-asset, HOGG – “the professional school-shootings survivor”, that appeared on CNN..

Indeed a look of stupidity about him. With “leaders” like this any wonder why the Kurds are universally despised?

Anything coming out of the US administration, and their affiliates is; straight out of Alice in wonderland…

We’ve become just like lying israeli scumbags: we falsely accuse others of crimes we ourselves are committing.

as
Reply to  Lena Jones

It’s just this kurd. No need to feel bad.

Just look at him how he lies! :)))) Shameless.
It’s like “Harry Truman accuses Russia of dropping the nukes over Hiroshima and Nagasaki”

Ah the Curds … that wise people who tried to found their own landlocked country by seizing land of all countries they are present…
What could possibly go wrong?
Landlocked and surrounded by enemies.

Why are we not genociding kurds already?

because they are not as ugly as you are…..even though some are quite ugly

Of course a prostitute will say and do anything if the price is right.

Honestly, you could not make this shit up if you tried!

Are we now living in a nutcase world where the US that runs ISIS is now claiming that the Russians are supporting ISIS? i wonder what kind of bullshit the nut cases in the US will come up with next?

Russia should have arranged safe passage of the ISIS fighters to Washington DC , where they could put their head-chopping talents to some good use.

Or even better , to Tel Aviv.

Once again all of these guys make the ridiculous claim that their enemies are allied with ISIS. Also, please characterize him solely as SDF, not US-backed.