Scores of Saudi mercenaries, including several high-ranking commanders, have been killed in a ballistic missile attack in Yemen. 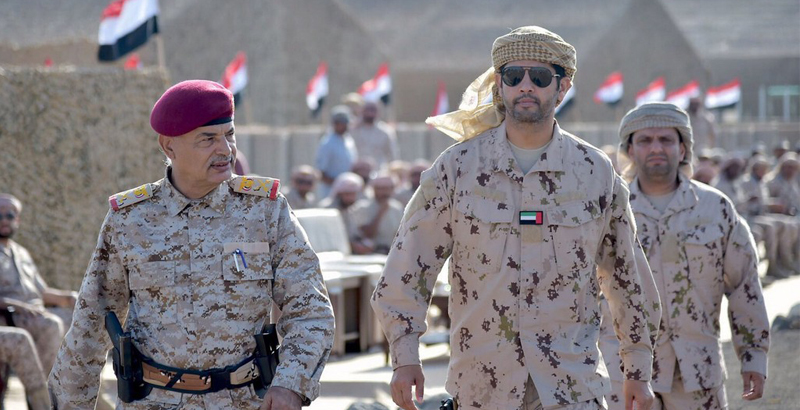 The Houthi-Saleh alliance has launched a medium-range ballistic missile on positions of Saudi-backed fighters, stationed near the strategic Bab el-Mandeb Strait, which connects the Red Sea and the Gulf of Aden, the al-Masirah TV-channel reported on Wednesday, citing press service of the Yemeni Operational Command. As a result, scores of Saudi mercenaries, including the commander of Saudi-led Emirati troops in Yemen, have been killed and wounded.

As the TV-channel noted, the missile hit Mokha city, located in Taiz province, and killed not only usual Saudi militants, but also several high-ranking commanders, including commander of Emirati troops in Yemen, Nasser Moshabib al-Atibi. According to the Here Aden news agency, second-in-command of the Saudi-backed military forces, Major General Ahad Saif al-Yafei, also was among killed fighters. Emirati officials still have not provided any comments on the report.

Meanwhile, the Houthi-Saleh alliance launched an attack on Saudi positions in al-Hanani area of Maqbanah district, located in the Yemeni southwestern province of Taiz. As a result, scores of pro-Saudi mercenaries were killed and wounded.

At the same time, on Wednesday, the Saudi Air Force carried out a series of airstrikes on residential neighborhoods all over Yemen. Several people were killed and wounded.

Six civilians were killed in Saudi airstrike on the Jabal al-Ahmar mountainous area in al-Humaydat district, located in the Yemeni northern province of al-Jawf. More than 20 airstrikes were carried out by Saudi fighter jets in other regions in Yemen. There still have not been any reports on casualties and extent of caused damage.

Good. He will be replaced by someone even more incompetent :D

Likely it was accurate single accurate attack. . The Houthi should publish more data.

Most Iranians are not very religious, hardly fanatical. The Iranian brand of state sponsored Shia Islam is lightyears ahead in moderation, whereas the Saudi brand seems to regress back to the Dark Ages. The Iranians are not sponsoring mosques and preachers preaching hate to Muslim youth in the West. The Saudis have caused thousands of young men in the West to join ISIS or Al-Nusra.

If I had to pick one side over the other I’d pick the Iranians every time.

Absolutely. While I don’t pretend to understand the Iranians (reformed Neocon, I now realize that it would take years to study and begin to understand a culture) there is one thing that is indisputable. They are not suicidal fanatics so we can always count on rational behavior from them.

With ISIS/Al Qaeda, they will start out a battle by launching 5 VBIEDs, each crewed by 3 people, over the course of a year they have easily spent 1,000 people on suicide attacks. How many suicide attacks has Iran performed? Zero.

How hatred makes people blind and utterly disrespectfully of God’s precious gift of life. What made this man leave his good life and his family in UAE only to waste his life and lives of others?

let me guess, it’s tochka again? i’m surprised how after years of relentless aerial bombing the republican guard of yemen keeps pulling these missiles out of their asses and onto saudis, fascinating, though I would award this not to the extraordinary talent and resilience of the republican guard, but to the complete incompetence, infantility and outright stupidity of saudi high command