Deputy Chief of Russia’s General Staff and the head of Russian forces in Syria Lieutenant General Alexander Chaiko has inspected the northeastern ‘safe zone’ area in Syria, according to a video released by Zvezda TV released on December 8.

The visit took place in the framework of a joint Russian-Turkish patrol along the M4 highway to the east of the Euphrates. According to the Zvezda TV report, the patrol also inspected the ongoing de-mining efforts in Alia and Tell Tamr, as well as the reconstruction works at the electric substation near the Mabrouka camp for displaced people west of Ras al-Ayn.

Another point of the joint patrol and inspection was to confirm the withdrawal of Kurdish armed groups from the area. Kurdish media reported that on December 7 Lieutenant General Alexander Chaiko discussed with the head of the Kurdish-led Syrian Democratic Forces, Mazloum Kobani, the implementation of the second phase for the agreement between the SDF and the Syrian Army – the establishment of the border security in northern Syria.

The second phase will reportedly include the deployment of Syrian Border Guard units along the border from Kobani to Semelka, two towns along Syria’s border with Turkey and Iraq respectively.

Last week, the SDF and Russia agreed on the deployment of Russian troops in Amuda, Tell Tamir and Ayn Issa during the meeting in Amuda, Syria’s Hasakah province.

You changed your tune pretty quick once the russians showed up masloum!!!

The russian general washed his hands twenty times aftee meeting a treasonous scum like you.

Off topic, but, involves the same crowd.

Tomorrow, don’t the Normandy Format hold a meeting, with regards the Minsk Agreement II and what happens next?

Aren’t the US confusing themselves, with not knowing that they have created in Ukraine and just who is involved?

So why is the Republican Senator Cory Gardner, focused on demonising Russia?
Who created the Maidan in the first place, which led to the people of Donbass refusing to be Governed by those the US chose?

Remember John McCain coming to town, back in December 2013 and looking down on his Maidan friends? Was this when him and Vicky were handing out the $5 billion cookies, to the people of Kiev? I wonder what they wanted in return? 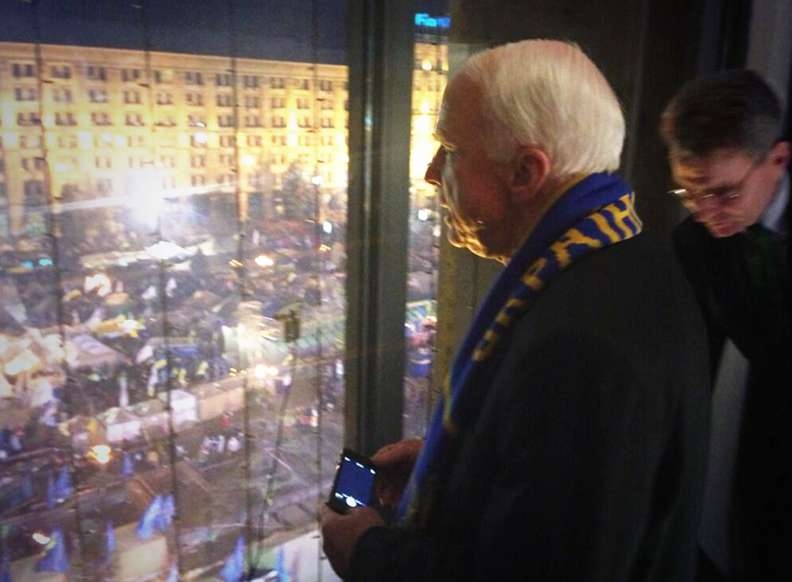 Then you had McCain sitting round the table, chatting to Vicky’s good mate the ‘the lights are on, but, nobody is at home’ boxer. Remember the phone call she had with Ambassador Pyatt, with regards her men, for Ukraine. The ‘FU EU’ phone call, referencing the lack of grey cells, the boxer possessed. 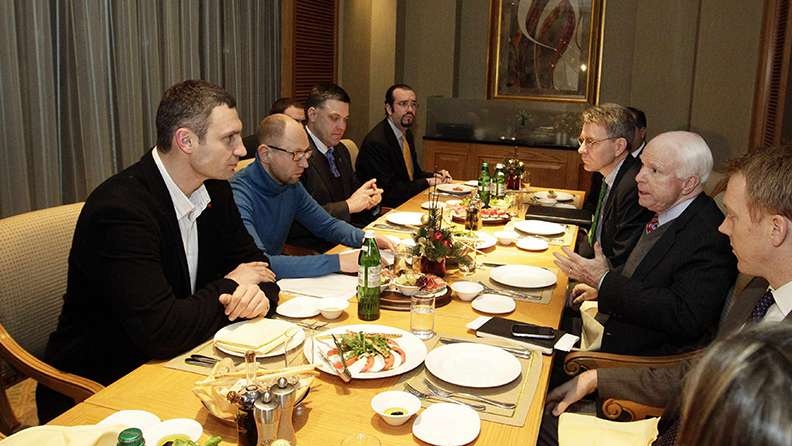 Funnily enough, many members from the McCain Foundation were over in Georgia, holding a similar meeting, back in September 2019. No doubt, hoping for another version of the Rose Revolution to get started. I wonder how that is coming along?

So who donates and sponsors Senator Cory Gardner, yet another member of the US Foreign Relations Committee, who appears obsessed with Russia?

The US Will Consider a Draft Bill on the Possibility of Recognising Russia as a “Sponsor of Terrorism”… https://www.stalkerzone.org/the-us-will-consider-a-draft-bill-on-the-possibility-of-recognising-russia-as-a-sponsor-of-terrorism/

$4,289,930
grand total of contributions Cory Gardner has reported in the current election cycle.
Number of Contributions from Individuals (of $200 or more): 3,161…

How much do the above pay in Corporate tax and why do so many believe that a personal donation to a Senator of chose, is the same as paying your taxes?

Well, as a Patriotic American, I sure want countries to be OUR allies than allies of an enemy like Putz Putin’s Residual Russia. But lots of fake Americans on these sites are also patriotic, just not to the US.

Remind me, but, just how long has the US been going and how old is Russia?

Which nations takes other hostage and which one actually has many friends, working with it?

If the Ukraine Nazis, are what you consider allies, then please ‘truck on’ and enjoy their form of friendship.

Nazis? Who speaks of Nazis? Most all the Nazis around here and on most all other sites are strong supporters of Putz Putin the Poisoner and his Residual RF.

The RF has been around for a few decades. The US for a few centuries. And so what?

The US has more than ten times the allies of the Putz’s RF. Damn, Igor, it’s three strikes and your’s our yet again.

Name a true friend of the US and not one the US has taken hostage?

How many nations, not just BRICS, EAEU and SCO partners, turn to Russia in times of need? Starting with Syria and the Middle East? How many nations actually trust Russia and despise Washington DC?

Harvey Swinestein
Reply to  AM Hants

You’re wasting your time with this Shlomo buddy. He is just another zionazi shill. They kicked him off Haaretz and Jpost for unintellible rants and he has come here to release his verbal diarrhea. Bottom-feeders like this don’t warrant a reply . .

AM Hants
Reply to  Harvey Swinestein

Cheers. Should remember not to feed the trolls.

Harvey Swinestein
Reply to  AM Hants

The more you encourage these creatures from Hell, the more they seem to spread their narcissism and hate speech. Just ignore the kike and let him stew in his own kosher stew . .

If you are referring to me, you lie as usual, Adolf.

For starters, the US has over 20 in NATO with more still wanting to join the US. These are legal treaty allies. Lots more around the world who are legal treaty partners. Your Putz’s RF has maybe a couple of treaty ones plus a few associated winners like Cuba and Venezuela. Try to get the simplest things correct.

Military partners and we can all thank heavens Iceland has so many forces to assist in the various NATO exercises. Friends are entirely different.

Thanks for admitting you were wrong, Igor.

Why does ‘Should Have Gone To Iceland’ so come to mind, when thinking of NATO?

Koloimoisky, Soros, etc etc etc, Yep, true fans of President Putin. How much did it cost the pair of them to get the Nanzis up and running, over in Ukraine?

No idea but matters not. By the numbers, there are way more Nazis in the Putz’s Russia than Ukraine. And your Putz of a Prez is clearly in a neo-Nazi mood of late as evidenced by this and other Kremlin linked sites. Oh, and besides you obviously missed the point. But your Vodka binging does have a tendency to kill what few brain cells you had, Igor.

Remind who celebrates the defeat of fascism, on the 9 May each year? Which nation has just signed upto celebrate the anniversaries of various Nanzi Achievements?

Paul
Reply to  AM Hants

You’d get more of a result trying to iron out scrotum’s than Jake321 he’s dried out in the sun too long!

If you were a “patriotic American” you wouldn’t be supporting the Zionist bastard state chump . .

Thats not correct at all.

Whatever that nonessential statement is supposed to mean.

Their systems are quite different from Yours and Ours. So many things are only possible by private funding. They pay in and get tax back in return.

By that its mainly totally normal financing. Maybee You can understand supporters of things pay and the rest of the taxpayers payes nothing.

You reallty dont get it, Your lining up seemes big, but many initiatives, which You think should be driven by tax is driven by paying less tax instead if You contribute/invest but it is by spending a lot of money first.

I can give an explanation for it. People comming to America did not trust any state, because many of them came from deciding nothing.

Therefore those money never reach the state as well as the 52 states in it. Firearms are same thing. Every citizen is allowed to defend themselves against the State as well as others persons much more then in most other countries.

And it do work even it has very nasty sides too.

Even so, I will remind You that people want to emmigrate to USA and not many leave.

Sorry, have no idea what you are talking about.

Russia does well, with regards keeping on top of tax revenue, owing to the simplicity of their system. 13% flat rate for all, oligarchs included and no opting out provisions. Guess that is why they have minimal debt, can afford to feed their people, finance their education, including university level and provide free healthcare. Not forgetting investing heavily in massive infrastructure programmes. Unlike most Western nations, who rely on globalists, who have a problem paying tax.

Paul
Reply to  AM Hants

Ah I reckon he’s another fella who thinks Cornflake boxes are Jigsaw puzzles!

AM Hants
Reply to  Paul

only uneducated unskilled peasants seek to immigrate to USA—and a few that have professional credentials—since pay is 3-4 times as much for physicians, lawyers in the US than any European nation

“COMMANDER OF RUSSIAN FORCES IN SYRIA INSPECTS NORTHEASTERN ‘SAFE ZONE’ AREA” – The commander made sure that all terrorists are safe inside the safe zone.

Z.P.
Reply to  Friend of Russia

Friend of which Russia?!
My impression is that ppl. like you are “friend’s” of NATO occupied Russia only.

You not even knows who is or was living there.

#Lockheed Martin and #Boeing killed 20 million people with #NAPALM Bombs in the 20th century. Reeducation: Child Kamikaze pilots were employed to stage the Pearl Harbor event. The idea of allied bombing raids using child pilots became the inspiration behind the book Ender’s Game, where essentially an entire war is fought using children and technology. Of course we know the Germans had the same technology. What they did not have was the willingness to do to their enemies what their enemies were willing to do to them, namely slaughter tens of millions of manufactured enemies using trick technology and doing it all with CHILDREN PILOTS. https://paradigmthreat.net/a/planes.html

Childsoldiers has been used long time before USA and Lachead Martin was invented and probatly 1000s of years ago. Its well descriebed.

I saw a movie about the Brittish Navy in old days. They recruited boys from 8 years old into being high ranked officers. Thats why the Brittish navy was the best for many centuries.

Children are very good soldiers because they are easy to educate by positive or negative attirudes. They yet has not learned to think much. They do have their limitations too.

In the old days there was no defined childhood for high as well as low in Denmark. You worked as You could by age and capabilities.

And we did have at least some childsoldiers. They started as drummers and hornblowers often in front used by the officers for commandos often dying first.

At that time in the navy it only was a criteria to be a low class sailor, that You should be strong and not afraid of hights – no age.

The footprint of Russia and its allies is far greater in Syria and the region than a decade ago. The US is floundering all over the place as its Zionist masters create more hatred for America in the world.