Houthi fighters stormed 15 positions of the Saudi military in the Kingdom’s southern province of Jizan during a major cross-border attack on February 7.

The Yemeni group’s media wing released a 24-minute video of the attack showing Houthi fighters storming Saudi positions and burning military vehicles. Some Western assault rifles and night-vision scopes, which were captured by the Houthis in the course of the attack, can be seen in the end of the video.

Later, Houthi fighters withdrew to their positions in northern Yemen, likely to avoid Saudi-led coalition warplanes. The coalition usually strikes positions that fall to the hands of the Houthis.

The Houthis stepped up their cross-border attacks during the last two months. These attacks are likely an attempt to deter the Saudi-led coalition that intensified its operations in central and northern Yemen following the UN-sponsored ceasefire agreement in the western part of the country.

The real cost to the Saudi cowards is much higher as their deficit financed Budget now shows. Most of the money is being ripped off by Jew, Americunt, Brit and French “contractors”. The Sudanese are not being paid and replaced by Pakis now as the pig MBS is going to Islamabad to ask for more Wahhabi madrassa cannon fodder, but the Pakis are weak and corrupt and will take the money and do nothing, like the Egyptians have been doing to the Saudi idiots for 60 years now.

Things might change in Pakistan now Imran Khan is in power.

I was hoping so too, but as you know the MI-6 arranged his marriage into the Jew Goldsmith family and he is totally owned by them. His ex-wife Jemima from Londonistan still controls his actions. His first foreign visit was to the Saudi and Emirati masters to beg for money and he is totally controlled by the corrupt loser military. Imran Khan is frontman for the Jews. Pakistan is dead broke and for a begging bowl of 210 million starving people its total FOREX reserves are less than $9 billion and enough to cover 3 weeks imports, so the Americunts and their Wahhabi poodles literally have the poor Pakis over a barrel.

The Saudis are broke, Pakistan is moving closer to the man with the money, China.
As for Jemima, he gave her the flick 15 years ago, do you live in a time warp?
His current wife is Bushra Bibi, a Pashtun.

Again, hope you are right. I have no hope in Paki military or corrupt politicians and the mess they have created in 70 years. Like its Zionist cousin, it is also an unsustainable basketcase and works for Americunt/Zionist neo-imperialism and spreads Wahhabi terror.

This has nothing do with Sunni-Shia issue, the Saudi scum wanted to dominate Yemen and turn it into a vassal state by imposing a pimp Hadi. Their indiscriminate bombing of all civilians whether Sunni or Shia has turned all Yemenis against the Saudi cowards. If they had any support in Yemen they would have made some progress in 4 years of humiliation and not be buying mercenaries who are running away. There are growing internal problems in the house of Saud pimps now too. I posted years ago that Yemen will be a Saudi quagmire as the Yemenis are natural born warriors dating back to the Queen of Sheba and don’t cotton to foreign invaders.

Correct, the Jews and rednecks want more OIL plunder at the cost of of Yemeni blood.

In another blow to Saudi scum, Morocco has just blamed Saudi cowards for fanning sectarian wars and is pulling out of the holocaust of Yemenis. Sudan has done the same. Only the Americunts, Zionists, British faggots and froggies are propping up the Saudi losers who are now paying the Pakis to send cannon fodder. Morocco suffered about 60 dead and wounded and 2 F-16’s shot down and there was growing opposition at home that even the puppet Mohammad VI could not ignore. The last one was “Royal” Moroccan Air Force F-16C Block 52, serial number 08-8008,shot down by Ansarollah using a Igla SA-16 in Saadah, while performing a mission as part of the Saudi-led war. The pilot was reported dead. I have scrambled the dead pilots face. The Ansarollah handed over the body within 3 days. 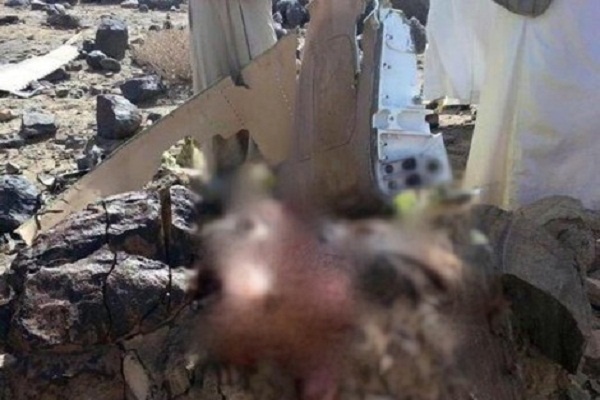 This Is Bad
Reply to  Assad must stay (gr8rambino)

Unbelievable the Saudis are currently entering a 4th year into the Conflict and they are still bieng humiliated and embarrassed by the Houthis it’s a circus.

Nope it is reality of life, when you go against natural born warriors, that will never give up fighting when you attack their motherland.

Assad must stay (gr8rambino)
Reply to  This Is Bad

its their vietnam lol

bravo to the houthis they never give up and are relentless.

Actually, they are getting better and more brazen in their attacks inside so-called Saudi Arabia. Most of the south western Saudi Arabia is actually Yemeni land anyway and was given to the al-Saud pimps by the devious limey gits in the 1930’s and 40’s to divide the Yemeni tribes on sectarian basis and divide and rule.

yes I know but soon all will be rectified to what used to be.

The Saudi scum are having a hard time paying off their loser mercenaries as the costs are growing. I examined the Saudi budget and there is a “special” defence transfer from their dwindling reserves for $3.7 BILLION to pay for mounting losses and mercenaries. The Saudis are running a deficit of over $18 BILLION this year at a time when oil prices have stagnated at $52 average a barrel and the lost war in Yemen is now costing over $3 billion an month and the Ansarollah missiles are getting better by the day.

And they are running out of oil.

Indeed, and internal dissent is rising with the downtrodden women leading the charge. There is very negative perception of the Wahhabi scumbags even in Jew controlled western media now and it will get worse. There is a Saudi external based opposition growing in western capitals now too and the moron MBS has opened too many fronts that his Americunt and Zionist masters would not be able to save him. Over 400 officers of the tribal Wahhabi based “national guard” loyal to Nayef and the Sudeiri clan have been replaced or just disappeared including the idiot Assiri who used to BS about the Yemen disaster on western media.

saudis/uae/oman are the worst/most coward fighters WITH and WITHOUT airsupport lol. a group of 10 houthis makes a group of 100 saudis run like scared girls.

This escalating of operations has dual purposes. Convince the Coalition it is time to hold the long overdue requiem mass for their dreams in Yemen because the only dreams they are going to get are nightmares complements of the Houthis.

I do not know how MBS survived but seems I underestimated him. But, the Houthis will take the battle in KSA to a whole new level if MBS does not figure out it is time to stop.

One has to give some credit to the Houthis and there method of fighting back, maybe the Palestinians and Lebanese should take some lessons from them.