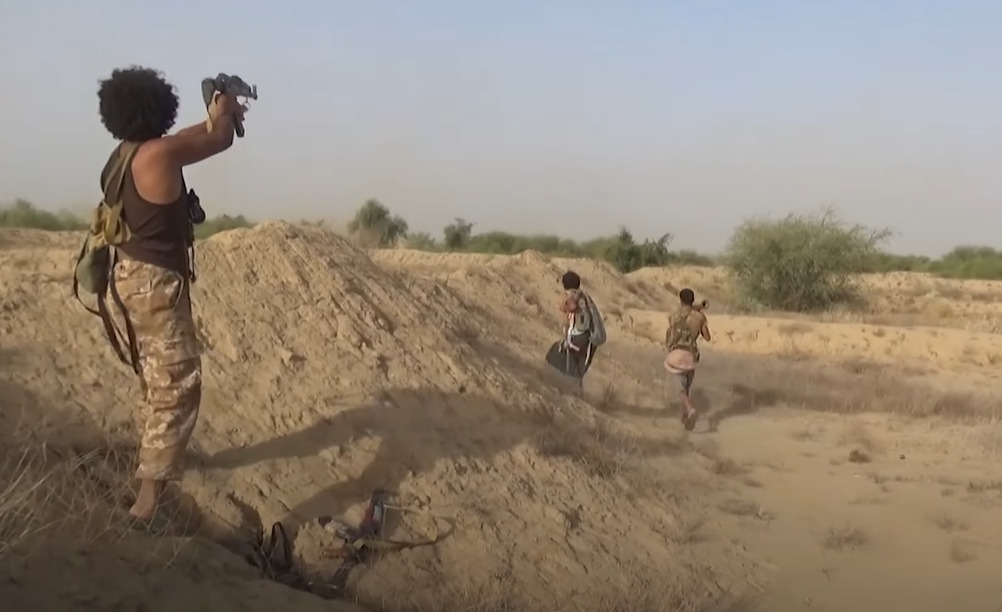 On April 16, the Houthis (as Ansar Allah is known) released a video of a recent attack by their fighters on Sudanese forces in the northwestern Yemeni province of Hajjah.

The 18-minute video shows Houthi fighters attacking the Sudanese Armed Forces west of Harad. The Houthis storm a network of forward positions, mortar posts as well as a small village that was occupied by Sudanese soldiers.

The Houthis bold attack forced Sudanese troops to withdrew from their positions without showing any real resistance. Houthi fighter used assault rifles and rocket-propelled grenades only.

The Sudanese military is the second biggest contributor to the Saudi-led coalition after the Saudi military itself. Earlier this year, the Houthis revealed that 4,416 Sudanese service members have been killed in Yemen, so far.

Despite the heavy losses and the 2011 Sudanese coup d’état, Khartoum is yet to leave the Saudi-led coalition. In 2019, a plan to withdrew 10,000 Sudanese troops from Yemen was announced. However, the withdrawal has never happened.

But you are a Turkroach

Yeah but not all turks hate Houthis

Most Turks are decent people and oppose AKP and Erodogan and also support anti-zionist resistance forces.

Just Me
Reply to  Furkan Sahin

The Houthi are natural born warriors and the illiterate Saudi Wahhabis just fcuked with the wrong hombres.

i love you bro

Nice video, in practice the houthi went shopping to light weapons at the Wahabi market, with the promotion “buy everything and don’t pay a s*it”, LOL.

Notice that there was no vigilant guard or sentry at that Sudanese position. there was a helmet on top of the sandbags. this is criminally bad security and abjectly poor training and discipline on the part of the Sudanese troops. Incredible negligence. A team of a few trained men could have wiped this position out. The Saudis are going to get annihilated if this is the widespread level of discipline.

Better they get annihilated LOL

The Sudanese Janjaweed Wahhabi mercs were not hired for their fighting skills. They are only good at raping and killing unarmed Sudanese women and children, then looting their villages. Only requires 15 minutes of training, tops. They thought the Saudi contract for buffer guards would be easy money. The most terrifying thing to the Janjaweed is that people are actually shooting back at them. That doesn’t happen to them in Sudan. They don’t have the intellectual or moral capacity to comprehend battle with a well-armed, determined adversary defending their home soil from invaders.

The Saudis have got to be desperate to employ this type of soldier. It’s no wonder that the Houthis are beating them soundly.

Houthis don’t want to wipe the enemy. They want to train them to run. Once they ran once or twice, they will sprint like Husayn Bolt – that will make the newcomers panic and run too, so on. You know, better no ally than an ally who leaves you alone.

The Sudanese are paid barely $300 a month and even the Saudi cowards have not paid them in months. Just look at the appalling sub human living conditions in the camp. There is trash everywhere, no basic first aid or any food but a few filthy pots. The Sudanese are just cheap cannon fodder.

I would like to know more about the circumstances of this. How many Sudanese were there at that position? What do they understand that they are doing there? Do they think they are sitting in the backwater (they hope) of a war earning a small amount of money to send back to their families in Sudan at no risk to themselves? Obviously that did not work out for them. They do not seem to have the stomach for a fight. They either thought they were outnumbered or simply don’t consider it their war to fight. And the amount of material they abandoned is just incredible. I guess they don’t patrol much, have mines or any type of alarm traps (trip flares) or anything like that. Or do any garbage collection. Did the Houthis sustain any casualties? I’m not sure if they ever include pictures or footage of their “martyred” comrades like other jihadists sometimes do in their videos.

My regards the alsauds cowards hahahaha

They are very good soldiers. And so brave and calm in battle.

Surprised given how they use their rifles (i.e. spray and pray).

This would have to be for a large unit. These aren’t weapons that a company would carry. More like a battalion. DshK weighs 100 lbs.

Good eye, with a six-round magazine. I stand corrected and will now knock out some push-ups.

That had to be a weapons stockpile. there were about 10 DshK heavy machine guns in that spread and a bunch of PKMs and a bunch of 82mm mortars. These are company-level weapons, and more than a company would have. Looks like they knocked over a battalion-level weapons cache.

I wrote an article the very day the Saudi Barbarians invaded Yemen predicting that the Houthis would wipe the floor with them. I admit I made one major mistake: I had taken it for granted that the Barbarians would at least capture Sana’a. I actually underestimated Barbarian incompetence. I hang my head in shame.

Try not to be too hard on yourself. There was no way to know the level of commitment from the UK/US.

There was never any question about the Ansarallah fighting abilities but their mastery of special forces type small unit frontal assault is textbook. They conducted, recon, each man knows his task and above all, are totally fearless. No wonder every invader in Yemen has suffered humiliating defeats since the Queen of Sheba’s realm. The Sudanese have lost around 5000 mercenaries for nothing. The Saudis are too cowardly to send their own eunuchs. Another interesting thing is the amount of trash and plastic waste the savage Sudanese are generating. The Houthis are also eco-warriors as the just recycle the weaponry and only take what they need.

Thank you for the video. My continued sincere respect for the most fearless army/fighters inhabiting this earth. Flipflop fighters with the boldness, fearless and courage that aren’t described in the dictionary. Legend. The Houthi defense continues to win against a beast too rich and comfortable.

TBH, I’ve always wondered about the training contents of armies. How someone receives multiple years of training and sucks this bad like the sudanese is a mystery.