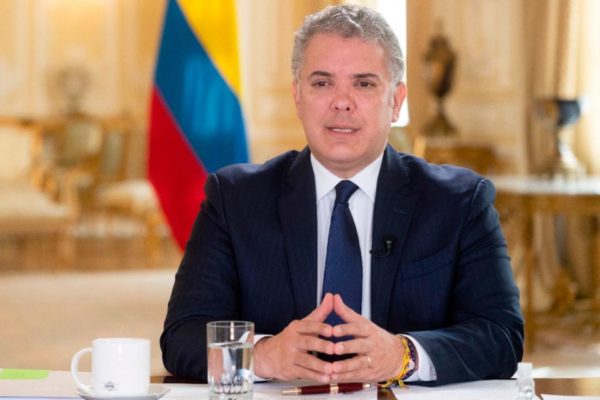 The National Electoral Council (CNE) of Colombia announced today that it has opened a preliminary investigation against President Iván Duque and his political party Centro Democrático (CD). The party allegedly failed to comply with electoral regulations on electoral financing during the campaign of 2018 in which Duque was elected president.

The CNE explained that the investigation is related to alleged contributions from the Venezuelan businessman Oswaldo Cisneros for a total value of US$300,000.

According to the Colombian Constitution, national electoral campaigns are prohibited from receiving donations from abroad. Cisneros is a businessman linked to the oil industry and his family is among the richest in Venezuela.

The starting point for the investigation was wiretapping requested by the Colombian Public Ministry. The people involved in the conversations were: Nubia Stella Martínez, director of CD; María Claudia Daza, who was an advisor to former president Alvaro Uribe and is now out of the country; and José “Ñeñe” Hernández, a cattle rancher who was murdered last year in Brazil during a robbery.

María Daza spoke with both about the alleged contributions of the Venezuelan businessman Oswaldo Cisneros. In the conversation between Martínez and Daza, published by the newspaper El Tiempo, Uribe’s former adviser asked, “What happened with the Venezuelan?”, to which the director of the president’s political party replied, “Yes. Do you know how much he gave us? $300,000.”

However, the CD director herself tried to justify her words by arguing that she suffered a ‘lapse’ when speaking with Daza. “It was not ‘gave’, but ‘offered to give’ (…). I said that sum because it was the one the businessman used. But one thing is what people offer in the campaigns and another is what they actually end up giving,” Martinez explained to the Colombian newspaper.

The CNE summoned both to testify, as well as Luis Guillermo Echeverri, campaign manager of current president Ivan Duque. In addition, the electoral council sent a letter in which the “CD is asked to send a copy of the accounting supports of the electoral campaign of the then candidate Dr Iván Duque Márquez, in order to determine the origin and amount of the contributions consigned in the income report and expenses of the campaign to the Presidency.”

For his part, the businessman Oswaldo Cisneros is linked to several related developments. According to Forbes magazine, his family has a fortune that exceeds US$1,100 million, and is figured as one of the richest families in Venezuela. Cisneros ventured into different business areas: Pepsi Cola Venezuela, Ditel (telecommunications) and the oil sector. In Colombia, it owns 19.9 percent of the shares of Canacol Energy’s Colombian subsidiary, the company CNE Oil and Gas SAS. In Venezuela, Cisneros does not sell crude abroad since its wells have been closed down for a long time.

Last March the Prosecutor’s Office began investigations of the people who could be involved in the wiretapping. In one of them, “Ñeñe” Hernández refers to the purchase of votes in favour of Duque in the La Guajira area. He also mentions former President Uribe (2002-2010). In the 2018 election, Duque prevailed over the leftist candidate Gustavo Petro, who currently leads the opposition to the government in the Senate. Hernández was being investigated as an alleged front man for a drug trafficking organization. It operated in the provinces of Cesar and La Guajira (in the far northeast of Colombia). ‘Ñeñe’ was also being investigated by the Prosecutor’s Office for the murder of Oscar Rodríguez, which occurred in 2011.

The CNE has also summoned former congresswoman Aída Merlano, currently imprisoned in Venezuela, to provide more information regarding the statements she made in an interview with Semana Magazine. Merlano affirmed that businessman Julio Gerlein and the Char family, a powerful political clan from the Colombian Caribbean, also bought votes to favour the election of Duque in the second round of the 2018 election. The former parliamentarian was sentenced in Colombia to 15 years in prison for electoral corruption. She fled the country last October while she was under investigation taking advantage of an appointment at a dental office in Bogotá. She was recaptured on January 27 in Venezuela by agents of the Special Actions Force (FAES) of the Bolivarian National Police (PNB) in Maracaibo. The CNE reported that Merlano’s summons will be made through the corresponding diplomatic channels.

The investigation was announced at a difficult time for the right-wing CD party and its political figureheads, several of whom have been cited for allegations of corruption. Last Tuesday, August 4, the Supreme Court of Justice (CSJ) ordered that former president and currently senator Alvaro Uribe be placed under preventive detention. He is being investigated for alleged procedural fraud and bribery of witnesses. LINK

The case is potentially a political and economic development of momentous import for another reason. Oswaldo Cisneros is from a family that has extensive ties to many of the deepest of the Deep State/ Economy/ Finance/ Religion networks embedded throughout the continent that have dominated politics, the media and the economy for many decades and left Latin America with the greatest levels of inequality, poverty and violence in the world.

“The undoubted political connection that marks the onset as well as the consolidation of the penetration of ‘the new Spanish conquerors’ in Latin America is located in a specific organization, the PSOE and, above all, the organization’s powerbroker Felipe González. His years at the helm of the government of Spain, with an absolute majority in Parliament between 1982 and 1993, and until 1996 supported by the Catalan group CiU, clearly demonstrate this driving role.

The associated embedded political-business relations are inherent to capitalism, as is the corruption that stems from them…

The power of the PSOE lobby in Latin America went – and remains – far beyond its presence in government, far exceeding the influence of the PP…

On 1 December 2014, Colombian President Juan Manuel Santos granted Felipe González Colombian nationality. Thus culminated a very long relationship between the former president of the Spanish government with a country that, along with Venezuela, marked his biography…

Another of Felipe González’s initial Latin American contacts was Gustavo Cisneros, also through Carlos Andrés Pérez. In 1983, after the expropriation of the RUMASA holding, the Council of Ministers approved the sale of Galerías Preciados to the business group ‘Organización Cisneros’ for 1,500 million pesetas. Only half of the amount was paid. The State did not collect the other half. In addition, Cisneros also received from the Administration loans for the cleaning of his new property worth 11,500 million pesetas. Five years later the company was sold for 30,600 million.

This businessman developed his fortune under the umbrella of Carlos Andrés Pérez in Venezuela and the Bush family in the US. Today he is one of the richest men in Latin America, his businesses include more than 50 firms and include ownership of the powerful complex Venevisión media, advertising companies, real estate, tourism, cosmetics, etc.

He has been repeatedly linked to money laundering from drug trafficking. In 1985, the North American economist Lyndon La Rouche, specialist in the investigation of drug trafficking and founder of the Executive Intelligence Review magazine for that purpose, attempted to distribute his book in Venezuela, ‘Narcotráfico S.A., The new Opium War’. One of its chapters is entirely dedicated to the Cisneros family, considered a key figure in Latin America for this type of business. Venezuelan intelligence services requisitioned the book and a court prohibited its sale in the country.

Felipe González’s relationship with Cisneros, which began so early and so strikingly, is decisive in assessing the relations of successive Spanish governments with Venezuela.

This political-business machine showed its most sinister and criminal face with the participation of the PP government, PSOE leaders and Spanish multinationals in the failed coup d’état against Chávez in 2002. It was carried out in close alliance with the US – and served as the spearhead of the EU’s involvement. It is worth remembering because the interests that move the ubiquitous machinery of power behind the scenes are the same as those that act now in Venezuela, and even some of the protagonists.” LINK

While the preliminary investigation of the Centro Democrático and related investigations by the Office of the Prosecutor General remain considerably removed from these underlying networks of power and control that spread across the continent, it is nonetheless exceptional that someone from one of their central figures (the Cisnero dynasty) should be investigated in such a high profile case at all.

Colombia is a de facto US colony w 9 US military installations, many US spies….colombia receives nearly 1.5 billion$ from the US each year to oppress and ensure that they produce ample cocaine to narcotize the US peasants and Wall Street hucksters

And NATO member! Let us not forget that tiny detail because US can attack Colombian army on the border with Venezuela and ask for NATO implementation of famous “article 5” to defend Columbia from Venezuela’s “aggression”….

Colombian cocaine and Afghanistan’s heroin are the main business of CIA drug smugglers (other drug smuggler cartels are amateurs comparing to CIA) That is the main income for “deep state” financing wars and interventions around the globe and their favorite drone rocketing of funerals and weddings in Muslim countries.

NATO observer status….I lived in Colombia 2 years…amerikan spies everywhere, pretending that they worked for Monsanto or some NGO….beware the viaje millionario

they can move them from “observer status”to the membership very quickly (over the night) since they on the paper fulfill all the conditions (not in active conflicts with neighbors and have internationally recognized borders) and because US say so (that they must become member). So “observer status’ is not big barrier at all.

Colombia will remain a sore on the South American continent until the cia want otherwise. Past history should have informed all peoples of South America that to welcome the yankee dollar is to welcome the shackles of madmen, swindlers and torturers.

The US currently has over 50 million unemployed, a failing economy and currency. Millions of tenants face a future without a roof over their heads whilst they starve due to lack of available food. And certain Colombians think the US can run things in Colombia? Soon the bribes won’t come to much. The cia will need to begin bribing in local currency or gold.