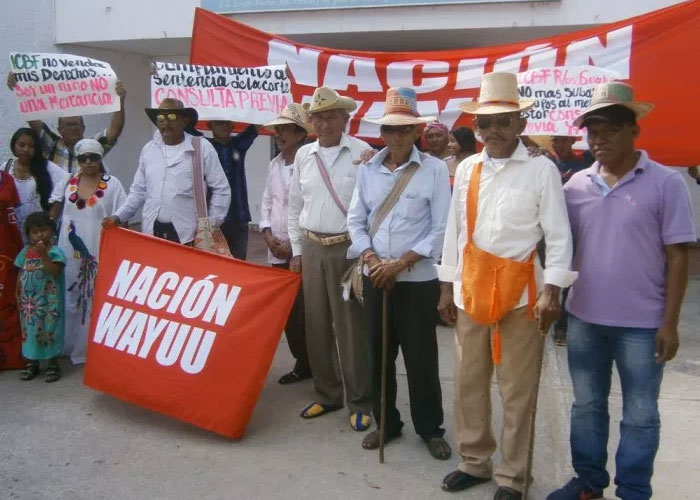 The following is a translation of a report concerning recent developments affecting the Wayùu people, as well as an interview with one of their leaders. The Wayúu are an Indigenous people whose ancestral territories are located in the province of La Guajira in the far northeast of Colombia (and northwest of Venezuela).

The Wayúu have managed to maintain their culture and occupancy of a large part of their ancestral territory despite over 500 years of colonization that has constantly sought to take over their lands, maritime territories and resources, and incorporate (enslave) the inhabitants into the colonial (globalized) systems of ownership and production. However, the threats to their continuity have only intensified with the passage of time; most recently (since the 1980s) a huge open-cut coalmine (‘El Cerrejón’, jointly owned by Anglo American, Glencore-Xstrata and BHP Billiton since 2002) has expropriated a significant portion of their territory and had devastating social, economic and environmental consequences for the communities in the region.

The facilities and infrastructure that make up the mining project of El Cerrejón include a 150 kilometre railway line to the port that exports the coal (Puerto Bolivar), several airports and roads as well as other major industrial, commercial and residential facilities, all owned and operated by the consortium. The complex also includes large swathes of adjacent land in the region, acquired by the systematic expropriation and in some cases forced displacement of local communities and farmers combined with the purchase of ranches and other properties; in total the companies hold title to approximately 70,000 hectares of land.

In particular, the coal mining operations have diverted the principle river in the region and the project uses enormous quantities of water in its daily operations, which it receives on a priority basis. The result is a substantial reduction in the quality and quantity of water available to the inhabitants in the region for domestic and agricultural purposes (a very arid climatic zone), as well as for the survival of the natural ecosystems that have traditionally provided abundant amounts of natural resources. Exacerbated by the loss of access to traditional territories, natural resources and employment caused by the mining project, the ongoing social and armed conflict in Colombia and endemic poverty in which the Indigenous peoples and their territories continue to suffer disproportionately, the Wayúu are facing one of the most difficult periods since the onset of European colonization over 500 years ago.

A recent judgment of the Constitutional Court (discussed in the interview below) denounces numerous violations of the rights of the Wayúu people by all levels of the Colombian State (national, provincial and municipal) and the consortium that owns El Cerrejón. This is the third time that the highest courts of the country have declared such violations of the rights of the inhabitants in the region.

Both of the earlier legal proceedings resulted in decisions in favour of the residents of the communities involved. One case was decided by the Colombian Supreme Court on the 7th of May 2002 concerning the expropriation and forced displacement of the community of Tabaco by security personnel deployed by the companies and the government in 2001. The other case (Sentencia T-528, pronounced on the 18th of September 1992) was initiated in the Constitutional Court by the residents of Caracolí and Espinal, two other communities displaced due to the expansion of mining. In both cases the court found in favor of the residents and made specific orders to resolve the grave breaches of the constitutional and legal rights of the residents that have occurred, but in each instance the companies and successive Colombian governments (municipal, departmental and national) have failed to comply with most of the measures specified in the court orders.

In separate proceedings, communities affected by successive expansion phases of the mining project applied to the National Contact Points in the home countries of the multinationals that are members of the OECD (Australia, the United Kingdom and Switzerland) pursuant to the OECD guidelines for foreign investors seeking respect for their constitutional and human rights and that the companies comply with all relevant national and international laws and standards. The judgments of the Supreme and Constitutional Courts and the OECD review procedure are discussed in more detail in a previous report by the author (Daniel Edgar, 2015).

630 days of resistance by the Wayúu Nation in La Guajira: Katsaliamana Resists.

The attacks continue against leaders of the social movement ‘Wayuu Nation’

So far in 2018, Mr. José Silva, president of the Wayúu Nation movement, has already been the victim of three attempts on his life. At the same time, our comrades Matilde López Apshana and Ramón Viecco have also suffered assassination attempts. The response of the State has been to remove the few inadequate measures that were previously provided by the Unit of Protection to some of our companions, considering that there is not enough PROOF that their lives are at risk.

For almost two years, the Wayuú Nation Indigenous Movement has been constructing a process of resistance in the Katsaliamana region, where they seek respect for their rights to prior consultation in the administration of State resources for early childhood care by the Colombian Institute of Family Welfare. This situation arose as the movement became aware of the large amounts of money that were given to the operators, contrasting with the malnutrition conditions that prevail in the area. Despite the resources provided, the economic, social and environmental crisis persists. There are multiple causes, among the most important of which are:

The Constitutional Court in its judgment T 302 of 2017, declares a STATE OF UNCONSTITUTIONALITY IN LA GUAJIRA, and demands that the State immediately rectify the violations of the constitution that have produced a crisis for the Wayúu, by guaranteeing access to water, and elaborating a structural solution to the dramatic situation that this ethnic group of the country is experiencing. It is October of 2018, and the situation continues with no change to the conditions that have also been denounced by the Ombudsman’s Office, the Inspector General’s Office, and various investigators, journalists and activists since 2014.

All these factors are affecting communities to the point of generating large numbers of deaths due to malnutrition of minors (in the course of 2018 the communities report more than 60 cases, without counting the children who live with this scourge without dying). The WAYUU NATION movement has participated extensively in legal processes and accompanied the communities in defence of their fundamental rights in these issues, yet the response has been the numerous attacks, kidnappings and murders that their leaders have experienced.

“The resistance continues, and the corresponding complaints will continue to be raised, until all the judgments, laws and other constitutional and institutional mechanisms for the reinstatement of the rights of the Wayuu ethnic group in the department of La Guajira have been implemented, overcoming the crisis to which we have been subjected as an ethnic group. We do not want state or organizational assistance. We want our autonomy again, and that is why we will continue fighting. We will continue to denounce the situation at the national and international levels, where our voices have begun to have strength, and where the support of organizations gives us the courage to continue”. This was expressed by a spokesman of the movement reacting to the continuing violence that they must endure.

630 days of resistance in Katsaliana

Interview with José Silva, a leader of the social movement Wayúu Nation and organizer of the judicial fight waged in numerous institutions of the Colombian State

On June 7, 2018, 540 days of peaceful resistance were commemorated in Katsaliamana, from where the Wayúu Nation movement has been created and strengthened, integrating more than 100 ancestral authorities and a multidisciplinary group of lawyers, psychologists, anthropologists, economists, social workers and chemical engineers, who have been working with their own resources and voluntarily, elaborating legal actions and protests for the defence and vindication of their rights to their territory, water, autonomy, prior consultation and rehabilitation of the environmental, social and cultural damage that they have suffered during 40 years of exploitation of the El Cerrejón mine, which annually produces 34 million tons of coal, and which is owned by the multinationals BHP Billiton, Glencore and Anglo American.

In an interview with José Silva, leader of the movement and manager of the legal struggles before the different institutions of the Colombian State, he told us about the main advances, the results obtained, and the challenges and goals that remain.

K.J: Last March 5 you received a visit from the Attorney General evaluating the current situation in the province. Also in April, ‘Operation Guajira’ was announced by the ICBF (a Colombian State agency). Are the public reports that resulted from these visits available, and what are the commitments that the State has made to resolve the crisis that still continues today.

Colombia Accused Venezuela’s Military Of Incursion Over Its Border

The Manmade Book, the bible, Koran and the Torah is Manmade, Man Made rules. Man fights each other.

“ICBF has, to work hand in hand with the communities and jointly build processes of attention that guarantee the integral protection to the boys and girls”

“since 2013, when the Auditor General released a report on the crisis, then the Ombudsman’s Office, and in 2016 the Inspector General’s Office,”

I love culture… but this is not right.