Article is originally appeared at RT

Finland, Norway and Sweden are readying for one of Europe’s largest fighter jet drills this year – the Arctic Challenge Exercise 2015, kicking off on Monday. Nine northern countries are taking part, with up to 90 aircraft expected in the sky at once.

Eurofighter Typhoons, Tornado GR4 fighters, as well as Lockheed Martin F-16s are just some of the aircraft that will take part in what Norway’s chief Brigadier General Jan Ove Rygg calls “orchestration and conduct of complex air operations, in close relation to NATO partners,” as cited by the Norwegian Armed Forces press release.

The jets will be joined in the air by various other multirole aircraft, among them NATO’s early warning and control jets, known as AWACS, and the DA-20 Falcon Jets, specializing in electronic warfare.

Among the participants are the United States, the United Kingdom, Switzerland, the Netherlands, Germany and France.

The games, to last for 12 days, will include close to 4,000 personnel, together with European and American planes adding to the list of equipment put forth by the three organizers.

Rygg, the director of this year’s games, says that the geographical setting is a “unique cross-border airspace makes ACE 2015 a one-of-a-kind training ground for increasing interoperability and skills in all parts of the chain.”

The exercise was conceived in 2009 and meant at first as a joint exercise between the three organizing members, and based off of Sweden’s Nordic Air Meet and the Finnish-Swedish cross-border training.

The maneuvers are to take place close to the Arctic Circle – an area of much contention between the regional and major world powers of the United States, Russia, Canada, Denmark and Norway. 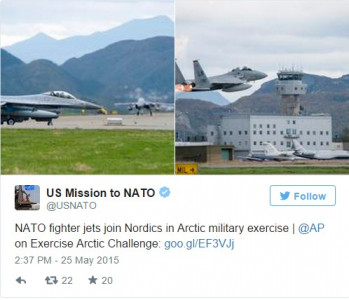 Russia has just set up a drifting research station there, ensuring its scientists’ ability to carry out prolonged studies for months on end. It has had floating research stations there since 1937, the last of which had to be evacuated in May 2013, because the ice floe had started to break apart.

At the end of last year, Russia adopted a new version of its military doctrine until the year 2020, which, for the first time, placed the protection of the country’s national interests in the Arctic among its top priorities. Within its framework, a joint strategic Arctic command was organized as part of the Northern Fleet in order to control and coordinate troops above the Arctic Circle.

The incidence of military training and war games is almost never devoid of politics; NATO is currently readying other drills – the naval kind – which are set to get underway just miles off the Russian coastal exclave of Kaliningrad, a gulf area sandwiched just between Poland and Latvia.

The games are to last two weeks and will feature 17 participants, mostly NATO members. Sweden, however, is among those where no consensus on NATO membership exists; and the games are largely seen as a signifier of an impending membership with the military bloc.

The common theme is a military fear of Russia, often expressed by its Baltic neighbors as intensified by their view of Russia’s alleged actions in Ukraine. Britain has just sent its biggest warship to Poland for the upcoming naval drills in this latest display of NATO’s military prowess.

These latest developments follow the NATO Secretary General’s promises that the alliance is going to increase its activity along the eastern borders, with more air and sea patrols, as well as regular drills.