Rayan Masha’al (real name – Bara’a Kadek), one of the co-founders of the ISIS-linked news agency Amaq was killed on Thursday, according to pro-opposition sources.

Ala’an TV reporter, Janan Musa, reported that the ISIS member was killed by a US air strike on his home in the town of Al-Mayadeen in the province of Deir Ezzor.

The founder of #ISIS-linked Aamaq News Agency Ryan Mishaal is reportedly killed in an airstrike in #Mayadeen, #Syria pic.twitter.com/Q0AxvmnZrk

The air strike reportedly led to the death of Raya and his daughter Lian. His wife was seriously wounded and she in critical condition as for now.

According to the Ala’an TV reported, Rayan had worked with the “Aleppo News” that supported the Syrian opposition and the Free Syrian Army. “Rayan” was even interviewed by Al Jazzera back then. He is originally from Al-Dana city in the Idlib countryside. He moved first to Aleppo, then to Raqqa and finally settled in the Deir Ezzor countryside.

Amaq is the ISIS main news agency and is considered one of the most important propaganda tools used by the terrorist group.

It has also published many of ISIS’s calls to carry out acts of terrorism in various parts of the world. According to Janan Musa, one of the most important staff in the news agency also is called Abu Suleiman al-Amriki, a US citizen.

How these fools still have phone/internet access is beyond me…

But it was ultimately pearl harbor that got us into the war, I dont see how this guys astrology predictions convinced us

There is little logic in what he writes.
The motto is always the British are to blame.

How was it manufactured?

Perhaps just another false flag op ?
This is a pix of the HMS Formidable :DDDDDDDDDD 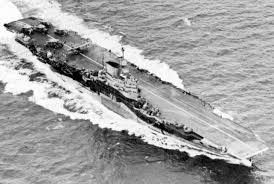 Hahahaha GOOOD!!! I was just wondering and hoping for someone to start destroying amaq!!!

See? No need for Russia to bomb people who might have some claim to be journalists: the US are instinctively drawn to such activity.

No need for Russia? you mean no need for the US, they are not welcome there.

I wasn’t saying “no need for Russia” in the sense of the whole Syria campaign. This referred to a discussion with (I think) the same poster, where I cautioned that bombing Amaq people might have a Geneva convention aspect. Of course the US operates outside legal and moral constraints (as I think the Doom III trailer phrased it), so in a way the issue resolved itself.

I wonder if they wanted to take him out and if so why?

When someone drops a one-ton bomb on your home, he usually tries to kill you (-;

Good point haha, but, why now? What were they worried about?

I can think of several reasons. As a deterrent. To harm the ISIS news agency, which serves as a tool for propaganda, recruiting and sending messages to activists. Because of something the Americans know about him. Because they had the chance…..

maybe he have a knowledged that the usa can be harm in the world of media?

He didn’t bring the bacon home. Al-Jazeera, filming the latest White Helmet Film Academy, shooting the flick and publishing it, before the release date. Then the White Helmets and all their PR related activity that connects them to ISIS/Al Qaeda or whatever they are called today.

Or various other reasons.

That would be the CIA doing some housecleaning. Dead stooges can’t rat you out. Anyone in ISIS working closely with the CIA/western intel or Saudis is going to be whacked now that their usefulness is over. Except for the highest ranking guys (obviously not this dude), who will be evacuated with their families and be sent to the U.S. to live a comfortable suburban life somewhere in Virginia or Maryland.

Loose strings…and a good PR stunt. Message to ISIS collaborators: you are expendable, never argue with us.

i remember a couple of weeks ago a similar news, with an ISIS commander killed by the Syrian Army and not by the yanks. Wonder if it’s the same person, i may be wrong but the pic seems the same.