The CNN TV-channel ran a fake news story, according to which Russia was closing an Anglo-American school in Moscow, which serves children of US, British and Canadian embassy personnel, as retaliation for US President Barack Obama’s sanctions. 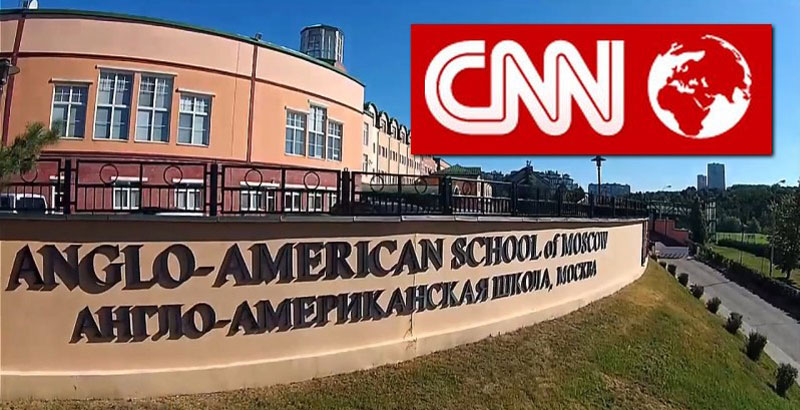 The CNN TV-channel, one of the media outlets that regularly complains about ‘fake news’, ran a fake news story, according to which Russia was closing an Anglo-American school in Moscow, which serves children of US, British and Canadian embassy personnel, as retaliation for US President Barack Obama’s sanctions.

“Russian authorities ordered the closure of the Anglo-American School of Moscow, a US official briefed on the matter said. The order from the Russian government closes the school, which serves children of US, British and Canadian embassy personnel, to US and foreign nationals,” CNN reported, citing a source in Washington.

In addition, according to the source of the TV-channel, the Russian government is also going to close access to a holiday hotel of the American Embassy, located in the north-west of Moscow in Serebryany Bor.

However, spokeswoman for the Russian Foreign Ministry, Maria Zakharova, denied the fact that the school had been closed.

“US officials ‘anonymously informed’ their media that Russia closed the Anglo-American School in Moscow as a retaliatory measure,” Zakharova wrote on her Facebook page. “That’s a lie. Apparently, the White House has completely lost its senses and began inventing sanctions against its own children.”

She also asked journalists not to write: “Moscow has denied… or Moscow will not…”

“Write as is – the CNN TV-channel and other Western media once again spread false information, citing official American sources.”

The misreported story is an embarrassment for CNN, which has run a series of articles, complaining about so-called fake news, over the past month.

An actual response of Russia to the sanctions was to propose that Vladimir Putin declare “31 employees of the US Embassy in Moscow and four diplomats from the US Consulate service in St. Petersburg as persons ‘non-grata’.”

However, later, it became known that Russian President Vladimir Putin has decided not to expel US diplomats from Russia in response to the Washington’s new sanctions against Moscow.

“The Russian diplomats, returning to their homeland, will spend the New Year holidays with relatives and friends – at home. We will not create problems for American diplomats. We will not expel anyone,” a statement of the Russian leader, spread by the Kremlin’s press-service, reads.

Putin added that Russia would not “prohibit families and children [of US diplomats] to use their usual resting places during the New Year holidays.”

“Moreover, I invite all the children of American diplomats, accredited in Russia, on the New Year’s and Christmas’ celebration in the Kremlin,” the Russian President said.

He also added that “further steps towards the restoration of the Russian-American relations will be built on the basis of the policy, which will be carried out by the administration of President Donald Trump.”

Meanwhile, in a related story, a senior US official told the Reuters news agency that Trump could reverse Obama’s executive order once he takes office and allow the 35 expelled Russian officials to return to America.

News Flash: CNN cucks get’s bitten in the ass by the ‘fake newz’ attack dogs it unleashed on alt media.

This entire affair, the ‘hacking’, is a hallmark of what I don’t like. My people, the American citizens, are led around by the nose with complete BS on the daily. Politicians, their patrons and supporting government agencies create what seems to be almost a never ending stream of nonsense, to cover up the mistakes, incompetence or out right corruption/scheming for personal benefit, which comes out of our capital.

The mistakes I can live with, because to live a human life it to learn and that involves tons of errors. The incompetency is another part of the learning curve, except where it is intentionally created. The corruption I do understand to a point, because rules and their enforcement, are usually not in line with reality and at times ‘stuff gets done’ which is of benefit to the public. But, some of the corruption is out right and intentionally harmful to humanity, so that individuals and groups may benefit at the price of the well being of mankind. That stuff, is a no go zone for me. Those people are welcome to jump into an arctic lake for a lengthy swim, as often as possible.

Given that is my position, the people in the news outlets like CNN will never have any respect from me, when they get themselves involved in the ‘game’. I wish a good day and Happy New Year to all.

All this ‘fake news’ puff coming from Obama White House and Democratic Party is not just about fact they lost election to Trump and bitter. Is also about Syria – Obama and the MSM cabal are trying to preemptively muddy the waters and damage credibility of any media that will inevitably start to show what has really been going on in east Aleppo all this time. For, militants have abandoned masses of munitions and weapons that clearly originate in, and transited through, NATO states – bought up in new eastern NATO members states with Warsaw Pact era production (Bulgaria/Ukraine/Croatia) and shipped into Syria via Turkey (if Turkish NATO airbases involved is legit question). There are already videos of huge caches that no ‘rebel opposition’ could afford nor transport, without serious logistical assistance from number of external states. Some munitions show very recent production dates, and NATO members do not act in this capacity without US government knowledge and direction. This sort of unfiltered footage threatens Obama’s and whole MSM narrative on Syria, to illustrate what has really been going on – systematic and illegal US/NATO/GCC support for terrorist recruitment and weapons supply for last six years – hence Obama’s last days of action to try and preemptively shut information flow down.

Western media simply discredit themselves. In doing so they harm western citizens. We need the truth, but that seems to be against the interests of those that dominate western governments. No doubt Russian media also mislead but they seem much more credible. We need to clear our swamp.