The Saudi hit team that murdered and dismembered journalist Jamal Khashoggi attempted to create a decoy in order to later provide “evidence” that Khashoggi departed the Istanbul consulate safely.

Early Monday CNN released footage and a still frame of a Saudi intelligence operative dressed up in Khashoggi’s clothes leaving the consulate by the back door, also sporting what appears to be a fake beard and glasses.

One member of the 15-man team suspected in the death of Jamal Khashoggi dressed up in his clothes and was captured on surveillance cameras around Istanbul on the day the journalist was killed, a senior Turkish official has told CNN.

The Saudi operative has been identified as Mustafa al-Madani, according to Tukish investigators, and was part of the Saudi hit squad that murdered Khashoggi inside the consulate on October 2. Madani while posing as Khashoggi, and even wearing the deceased journalist’s clothes, was later seen at the Blue Mosque, a well-known historic site and tourist attraction in the heart of the city.

Khashoggi had entered the consulate in order to obtain papers for his upcoming wedding but was murdered only moments later in what’s been described as a gruesome scene which last seven minutes.

CNN has released a video that allegedly shows a #Saudi operative disguised as Jamal #Khashoggi, attempting to make it look like the journalist had walked out of the building. Via @trtworld pic.twitter.com/wlhzfM91BE

The video of the body “double” is but the latest bizarre twist in an increasingly strange story which shows an immense amount of planning and preparation went into the killing.

However, it also increasingly appears to resemble a botched operation straight from a Hollywood spy thriller as the more information the Turks leak, the more outlandish and almost unbelievable the plot becomes.

Blurry image of Madani posing as Khashoggi near the Blue Mosque in central Istanbul on the day of the journalist’s disappearance and murder. In the apparent cover-up that followed Khashoggi’s death, Madani, 57, who is of similar height, age and build to Khashoggi, 59, was used as a decoy for the journalist, according to the Turkish official.

A senior Turkish official told CNN that the video showed that Madani was brought to Istanbul to act as a body double.

This further proves that the current official Saudi narrative of an unintentional and accidental killing during an “interrogation gone wrong” is false given such pre-planned attempts to throw subsequent investigations off track.

A Turkish official told CNN, “You don’t need a body double for a rendition or an interrogation,” and said of the ongoing investigation: “Our assessment has not changed since October 6. This was a premeditated murder and the body was moved out of the consulate.”

Meanwhile, Turkish state media has reported a suspicious car belonging to the Saudi consulate has been found abandoned.

The car, a black Mercedes, is said to match a car bearing diplomatic plates seen outside the Saudi consulate on the day of Khashoggi’s disappearance and police have searched for it since. Police sources told daily Hürriyet on Oct. 22 that the Mercedes was found in Istanbul’s Sultangazi district. The car can only be searched if Saudi Arabia gives permission as it carries a diplomatic plate.

Meanwhile, another vehicle, carrying no license plate, was removed from the consulate on Oct. 22 with a tow truck.

Investigators are currently interviewing staff employed at the consulate, including a driver who may have knowledge of the suspicious car that’s been recovered.

The plot thickens.
This is getting very interesting. :)

So, if he’s disguising himself as Khashoggi, why the wig (thick black hair)??? More fake news???

I noticed that too. The fake beard is ludicrously obvious as fake. The hair does not match at all. If this was intended to be a double, it reveals extraordinary incompetence that raises some skepticism. I have seen Saudi incompetence but this!

Still, the Saudi’s have been caught and had to admit he was killed in the consulate … by accident … yeah, right.

They probably used an old picture for the disguise, when Khashoggi had more hair.

Good one. Consulate to be renamed and launch a consultancy business:

Hire our agents and give them a mission and then just watch them go! We guarantee they will make every mistake possible and not just flawed execution but also flawed planning and of course, a bad attitude. Learn from us what not to do.

Learning from success must be complemented with learning from mistakes. And when you come to us, we guarantee the most disastrous outcomes, more disastrous then you could ever imagine. Simply put we are the best and if you still have doubts, just look at our amazing accomplishments in Yemen!

So come to us and learn from the best, and we will always consistently deliver because we never learn.

The resemblance is close enough to be mistaken by an unsuspecting observer, like a low-level intelligence agent or diplomatic police watching a consulate seeing someone looking like him entered the building and later got out.

He also has enough differences (the hair) so they may claim it was not their intention in case things went south. 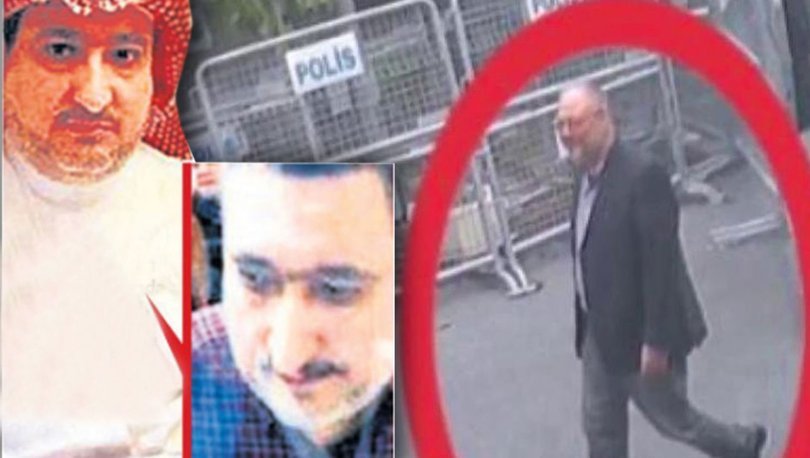 They say reality is more fantastic than fiction, and it’s true. I am beginning to enjoy it if for no other reason than for seeing the Saudis and the rest scurrying around.

Soooo…they stripped him naked before they killed him so that someone else could wear the clothes with no blood splatter?

They must have gotten their training from watching Dexter

Yes, that is exactly how Dexter would have done it. :-)

Clearly incompetence is their core competence. Awesome. They should have Consulate renamed and launch a consultancy business. I thought It might be nice if I give them some marketing ideas

Our services are critical to your success because Learning from success is never complete without learning from mistakes. Let us make all the mistakes for you, and not just any old run of the mill mistakes, that is for amateurs. When you come to us, we guarantee the most disastrous outcomes, more disastrous then you could ever imagine. No one can f_ck it up better than us and if you still have doubts, just look at our amazing accomplishments in Yemen!

Hire our agents and give them a mission and then just watch them go! We guarantee they will make every mistake possible and not just flawed execution but also flawed planning and of course, a bad attitude.

So come to us and learn from the best, and we will always consistently deliver because we never learn.

Istanbul Police demonstrated extraordinary competence in this particular case. They proved they’re able to get results, even when the suspect is protected by diplomatic convention and uncooperative. Unreal.
If only they’d show the same level of competence to help the victims of muggers, scamming taxi drivers and restaurants!

Still a beautiful city with amazing places to visit and delicious food, just don’t act like an idiot tourist and avoid Kurdish neighbourhoods and shady places, specially at night, if you don’t know what you’re doing ;)

CIA director Gina Haspel is flying to Turkey to personally cover up this murder.

Too late. She is stupid as well.

You go Turkey. Great job in how Turkish intelligence are letting out only enough bits of evidence at one time so they can catch and humiliate the bumbling murderous Saudis with each new lie the Saudis manufacture over and over again. With each new idiotic lie by the Saudis being disproven by the Turks the Saudis are shown to be more deceitful, treacherous, ridiculous and brutal every day.

1- It was too dumb of an idea (even for Arabs) to kill a journalist of Washington Post in front of the whole world and within its consulate.
2- Saudi execution team made too many mistakes.
3- US/IsraHell control KSA’s military and probably intelligence too.

These make me think that the plot was against KSA and thus those deliberate mistakes to condemn the Saudi King MBS who already has a lot of blood in his hands. The reason; MBS may have angered US-raHell; may be by not Increasing oil output to keep prices stable due to forthcoming Iran embargo beginning November or another reason we dont know.

You have to be rough at times to keep your dog behaving.

PS. The Greater Middle East map also shows a dismantled KSA – think thats the easiest country to tear into pieces in the region. IsraHell playing big. Doomsday on the corner?