Project Veritas has obtained a video proving that CNN is just a tool of anti-Russian and anti-Trump propaganda. John Bonifield a Sr. Producer at CNN has admitted that CNN staff is ideologically biased against Trump and called theat the whole Russia narrative is just a “bullsh*t”. The real CNN goal is ratings.

“It’s a business, people are like the media has an ethical phssssss…. All the nice cutesy little ethics that used to get talked about in journalism school you’re just like, that’s adorable. That’s adorable. This is a business,” Bonifield said adding, “Trump is good for business right now.”

And now tell us something what we didn´t know already.

The real CNN goal is ratings…

Well, they suck at it… seriously. For non-US readers, the network rankings below in red (Adult Swim, Nick-at-Nite) are both cartoon networks. During U.S. prime time (8PM – 11PM), CNN does even worse ranking lower at #11 – but does manages to beat the two cartoon networks during that time. 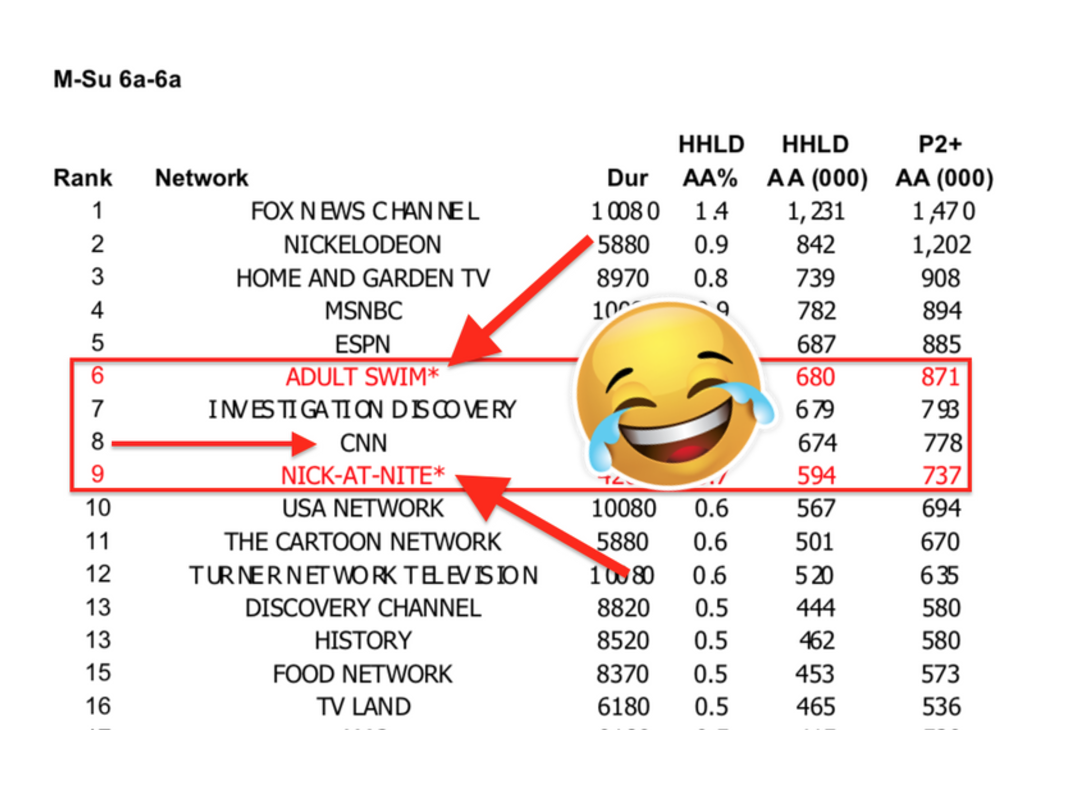 As a non-US reader I find Adult Swim to be the only respectable name there. :)

those ratings are thanks to the many thousands of airport terminals and gates that endlessly stream this garbage.

And office TVs that need something “””respectable””” on screen.

Everyone with some sense left has understood what the media has been doing, but it is always pleasant to see this kind of outstanding disclosures.

So you’re saying if the sports producer on CNN thinks this Russian collusion story is BS then CNN is pushing the collusion story to get higher ratings…or to hurt the WH? I’m not seeing your POV. The janitor at my army unit doesn’t believe anyone would ever attack us and that we’re truly a drain on the tax payers….everybody is entitled to their opinion. It doesn’t mean he’s in step with the army’s opinions and objectives and it doesn’t mean the CNN sports or medical producer’s opinions is in step with CNN’s..

It is not a matter of people’s individual opinion, it is about deluding. The direct causal relationship is corruption, with some form of economic benefit for all those involved (or possible risk of individual losses if the work is not carried out).
What the goal of each deluding is, varies from case to case, for example, it might be as you mentioned collusion between different organizations, public or private, national or international.

the truth is, 3 journalists left the CNN, bacause the chief editor forbad to release investigation aboit russian activities. so, i sthinh, this is not narrative, the journalists do happy and on own. this article lies.

absolute rubbish over 100 hrs of footage from inside C N N has been released. unedited…. CNN is complete BOLLOX!

What does bollox mean? Lol

Reality is always a great leveller of those whose fantasies have taken hold of their sanity.

Yes, if you can not distinguish between your desires and goals, you will not only experience planning difficulties, but you will also get crazy contradictory results …

I have been saying all day, the agenda supersedes all, it does not matter if Trump, or Clinton or anyone else. He or she would be bombing Syrian forces, blaming and accusing Iran and warning and sanctioning Russia, the agenda has a life of it’s own, it is quite literally the survival of the USA. Trump cannot undo it. It looks in doubt unless they foment and cause a huge war, in any case no-one wins, but the nut cases in DC think if they cant have it, the European energy market, no-one will.

The US is becoming the pariah rouge state, and it needs a bloody nose, a real good one. Like Viet Nam.

That’s a nice clean up, no it’s not just for ratings, although that’s a big part of it, they are the cover, the propaganda for the deep state, they won’t stop. Obama is their poster Muslim guy. CNN is bought and paid for propaganda. Period.

The media is owned primarily by Zionists, and their goyim cohorts who want total control of world economies and the people’s minds. Great job by PV exposing this Goebbels style propaganda. Trump is up against these pigs, but his close association with Israel via his son in law and others bind his hands. He is still the best alternative, so far, for Russia and world peace.

For you vodka drinking, stupid fucking slavic morons here who just want war with America, I again say that as a medical professional, I have seen Russians and others Eastern block citizens here and I dont think you understand the consequences of a America vs. Russia war. No one will win and your country men will die or fight against you. Many of us Americans voted for Trump as he was an alternative to status quo. We want no war with Russia nor anyone unless provoked. Putin has done a great job with restraint. A good leader. My fear for Russia is that your country will become like Yugoslavia once that strong leader is gone.

If the US stop funding ISIS and giving them air support war with Russia will become more distant mebbee? Also Muslims are at war with Jewish, so dont fight their war for them

CNN as Zion’s premier mind control tool never does anything for ratings.
Being owned by the banking cartel money is not a concern to them.
Everything CNN does is in service of Zion’s global hegemony.

Loads of liberals might be wakingup to this and getting that feeling of betrayel we all felt when we realised M S M is lying to us. GOOD! serves them right for just pointing the finger and hurling insults instead of holding a debate with facts

its funny how CNN, the NYT and the WP came to the rescue by saying that ‘this producer is only a producer for CNN’s medical field of news therefore we do not regard his knowledge on the Russian intervention as legitimate’.
So project Veritas (the group who recorded the video) came out with another leak hahahaha.
This time from a main new host on CNN who on TV says “Russia, Russia, Russia” then out on the street he says to an old friend (secretly recording him) “the Russia thing is a big nothing Burger”! hahahahaha

Project Veritas has more secretly recorded video so these news outlets will have to start slowly down their BS on Russia or play a game of chicken with a group who could hurt them even worse! Even end careers that are worth many millions per year!

Note# if an engineer lied in his works, he would be out of a job fast as whatever he designed would fail and be extremely costly!
But in the news world, lies make money! But i believe the destruction it causes is within civilised society where a nation is no longer united. Its now extreme left vs an Alt Right! Its disgusting!

We can only rely on ourselves to find truth now! Thats why when it DOESNT MAKE SENSE for Assad to use Chemical weapons against his enemies, u have to start choosing a side! Who do u believe?

Russia and Assad or America and their failed record from the past blaming the wrong people or coming up with false evidence!
They dont care…. so long as they win!