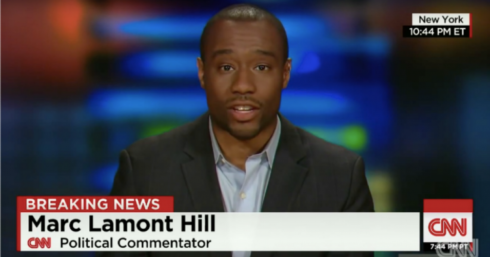 The Palestinian Journalists Syndicate accused the CNN of consenting to the “Zionist Lobby.”

CNN was accused of “total acquiescence to pressure from the Zionist lobby” for its decision to fire contributor Marc Lamont Hill on November 29th, for calling for a “free Palestine from the river to the sea,” during an event held at the United Nations for the International Day of Solidarity with the Palestinian People on the previous day.

“We must advocate and promote non-violence,” he said in his comments. “We cannot endorse a narrow politics of respectability that shames Palestinians for resisting, for refusing to do nothing in the face of state violence and ethnic cleansing.”

Hill is a professor of media studies and urban education at Temple who also hosted the syndicated television show “Our World with Black Enterprise.”

“We have an opportunity to not just offer solidarity in words but to commit to political action, grassroots action, local action and international action that will give us what justice requires and that is a free Palestine from the river to the sea,” Hill said.

The Philadelphia Enquirer published an opinion piece by Hill on December 1st, “Critics of this phrase have suggested that I was calling for violence against Jewish people. In all honesty, I was stunned, and saddened, that this was the response.”

“Palestine from the river to the sea” was a slogan of the Palestine Liberation Organization beginning with its founding in 1964, claiming a Palestinian state between the Jordan River and the Mediterranean Sea. It rejects any control by Israel of any land in the region, including areas controlled by Israel before 1967. It later became a political slogan used by Palestinians who reject any compromise with Israel, and most notably of Hamas.

In his article, Hill said that he supported  justice in the area from the Jordan River to the Mediterranean Sea, in the form of  a single bi-national democratic state that encompasses Israel, the West Bank, and Gaza.

On December 2nd, Al Jazeera published an opinion piece by Mariam Barghouti named “CNN: Facts first, just not on Israel.” In her article, she reviewed Hill’s speech who very much based everything he said on facts. However, “CNN, which last year adopted a new slogan – “Facts first” – did not seem to agree with these facts. After pro-Israel organisations like the Anti-Defamation League (ADL) condemned the speech, the TV station was quick to sever its ties with Hill.”

CNN did not disclose why it fired Hill, however Barghouti claimed that to many it is clear that the outlet caved in to pressure from pro-Israel groups, and it really is obvious.

The Zionist lobby is quick to use accusations of anti-Semitism against anybody who criticizes Israel and supports the Palestinian right to self-determination. However, calling for the freedom of Palestinians and for recognition of their human rights is not “anti-Semitic; it is pro-Palestinian.”

This is also another example of a media that claimed objectivity and delivery of “facts first, and be standing up to the ones in power took part in silencing voices.

“Those who do not stand on the “safe side” of things – people like Marc Lamont Hill – have been taking clear positions on Palestine, based on facts and critical thinking. They – like others throughout history who stood up for oppressed peoples’ rights – are vilified and viciously attacked, but they will persevere and continue to speak truth to power, objectively and factually,” Barghouti wrote.

I am trying to find the original source of this so called leak (I thought it was Ben Fulford, but not, just being repeated there). It looks like this may be the real deal,so any help will be appreciated:

A little known NATO plan from 2015 coded ‘Odessa Viking’ is now being prepared to provoke Russia and put them in a lose – lose situation.

Copy and paste: A little known NATO plan from 2015 coded ‘Odessa Viking’ is now being prepared This an audacious plan to outflank Russia and gain entry into the Sea of Azov through the back door.

A clue to the nature of the operation is in the name. Vikings sometimes carried their light warships overland to surprise and outflank an enemy, or to avoid fighting a more powerful and hostile group.

Light displacement, shallow draft assets, including hovercraft, would be delivered to the Ukrainian Naval facility in Odessa, and then transferred to the Sea of Azov via a protected route inside Ukrainian territory. The route will be over water AND LAND.

This will bypass or outflank Russian blockades and primary defences and is a major chess-board-move provocation by NATO aimed at putting Russia into a lose-lose situation.

If the Russians DO NOT respond they risk becoming further outflanked and vulnerable to attack, or at least exposed to continuous harassment, pressure, and even humiliation.

But if the Russians DO respond, any Russian action will be spun and propagandised as far as possible as proof of Russian Aggression…………………….

It goes on a bit more but you get the idea. can anyone on here point to the source of this leak as I’ve trawlled he internet looking and come up with squat.

No need to reply to this now. I have given up on this as it will be very easy to confirm or deny if we see any patrol boats and hovercraft being delivered to Ukraine in the coming weeks. It just caught my imagination how boats could be transported overland. Thanks to all who have replied on my previous posts on this.

bringing light boats in the sea of azov all they manage to do is a hole in the water and what they provoke doing that is accelerating their demise. Beside the fact american actions proved that their strategy is been left to the holyshit script writers.

“…consenting to the Zionist lobby…”

WTF – CNN IS the Zionist lobby.

Words of wisdom from the indomitable Trump.

Amazing how some news networks have no shame in having their pro-Israeli bias exposed.

News agencies don’t tolerate men using their positions for their own agendas, South Front. Unlike you who says whatever you want in your articles and expect people to still read it. Even if he had said the opposite, it still would not be appropriate to do so, although I don’t know if CNN would have taken him off the air. FYI CNN is on the left side of American politics, and if they’re willing to do this how much support do you really think there is for Palestine in America? And yes anti-Semitism is a real problem, just look at your own comment forums. But to be fair, I did get into an online argument with some Jewish guy once who thought anti-Semitism was as rampant in the US as it is elsewhere.

CNN is not a news agency, it’s a Zionist propaganda company. One of the founders of CNN Reese Schonfeld is a well known Zionist.

Most of the western media is controlled by Zionists, news agencies don’t really exist in the USA, all are propaganda first and foremost.

Theres nothing semite about these people, thats a canard argument.

I dont buy the jewish bashing either, some of the salafist imperialists are jews some are not.

Both the cases I outlined above show some deliberate mis direction

A: confuse samaritans or semites with todays jews, todays jews are from europe and america. Sephardic jews in morocco are different. None of these people are semites…thus the term anti semitic is false.

B: Blaming jews for all the problems is also a fake argument. We are dealing with empire here, this empire is a globalist empire, i see the jew blaming as a smoke screen and intellectually dishonest.

The policies of the state of israel i do not agree with . I urge them to change course before they get us all killed.