CNN is taking heat for threatening to publish the identity of a private citizen who posted a video lampooning the network. 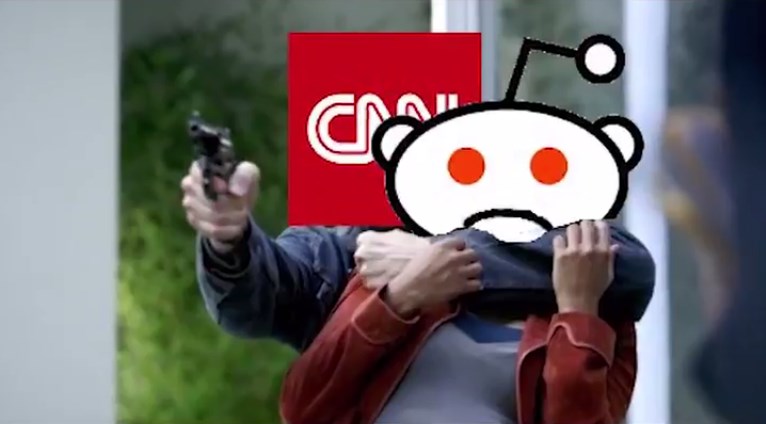 Redditor ‘HanAssholeSolo’ is credited as the creator of a clip showing President Trump beating up a man with a CNN logo superimposed over his face, which the President then tweeted on Sunday morning.

CNN statement responding to the president: “We will keep doing our jobs. He should start doing his.” pic.twitter.com/Gn1YRA2DRG

While the White House has said the video didn’t come from Reddit, CNN’s Andrew Kaczynski  – a total dick, went on a deep dive, uncovering now-deleted posts from ‘HanAssholeSolo’ which the network deemed offensive. CNN decided not to publish the the user’s personal details, for now, because HanAssholeSolo has ‘showed his remorse’ for the ‘offending posts’ and ‘ugly behavior’ – effectively threatening to expose a private citizen if he doesn’t stay in line.

HanAssholeSolo issued an apology on Reddit Tuesday, calling the video a “prank, nothing more.”

“The meme was created purely as satire, it was not meant to be a call to violence against CNN or any other news affiliation… …I had no idea anyone would take it and put sound to it and then have it put up on the President’s Twitter feed.”

Here’s what people thought about that:

Meanwhile, CNN’s Andrew Kaczynski has said that people are misinterpreting the article.

This line is being misinterpreted. It was intended only to mean we made no agreement w/the man about his identity. https://t.co/9FL6EvTikx

Sure Andrew… CNN isn’t publishing his name “because he is a private citizen” who “showed remorse,” yet you reserve the right to expose his identity if you don’t like how he behaves in the future. Sounds like a threat.

How did they find him?

While CNN maintains they were able to link HanAssholeSolo’s posts to his Facebook account, a 4chan user claiming to be a CNN insider suggested that CNN obtained his IP address from his ISP and ‘unmasked’ him.

Here’s how @CNN #CNNBlackmail went down, from insider at @CNN that spiilled the beans on 4Chan. pic.twitter.com/05mfoqxzwj

CNN’s latest blunder follows a devastating week for CNN, whose last shred of credibility was destroyed in a blaze of glory by James O’Keefe last week. Reactions to the network’s threat to expose (or ‘Dox’) Redditor HanAssholeSolo have been hilarious… you can see for yourself by searching the hashtag #CNNBlackMail on Twitter.

“Let’s just publicly threaten to dox some redditor. There’s no way this will backfire on us.” #cnnblackmail pic.twitter.com/dvomyvgrc0

If 4chan is successful against #CNN then discount goes? https://t.co/uvw6vRuOHd

#CNNBlackmail
4chan has declared war upon CNN,and soon others will follow Operation:Autism Storm will be the beginning of the next Meme War pic.twitter.com/IwznqQz6Za

I do so enjoy seeing American Democratic Values being demonstrated to the world. They mimic those of North Korea and Saudi Arabia etc. :)

has CNN run out of toes to shoot at?