The CNN TV-channel has admitted the existence of ‘war against Trump’. 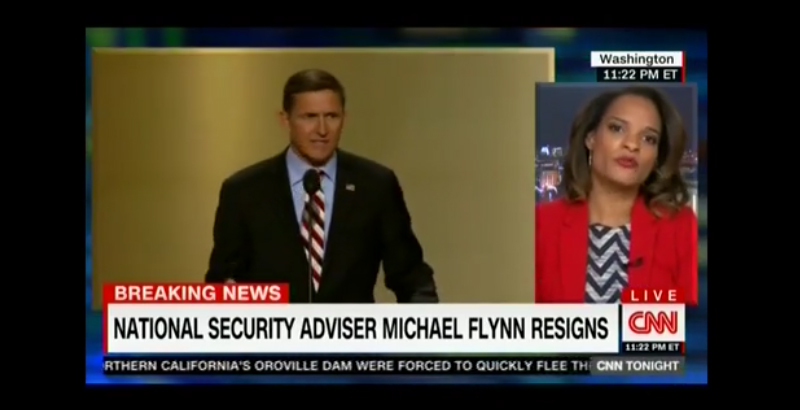 On Monday, after it became known about the resignation of national security adviser of US President Donald Trump, Michael Flynn, CNN’s political reporter Nia-Malika Henderson said that the resignation might be viewed by some people as an attempt of the Trump’s administration to get the controversy of his alleged conversations with Russia off the radar.

At the same time, Henderson also suggested that this development might be viewed by other people as the press, having “scored points” against the Trump’s White House.

“You imagine that some people might be looking at this as some sort of reset — to get this story off the radar, to get this story off the front pages, like The Washington Post and The New York Times,” Henderson said. “And others might be looking at it as the press having scored some points against this White House. And we know this is a White House that has an ongoing feud with many different outlets. And so, in that way, I imagine there are going to be a lot of different views in this White House as we know.”

The video can be seen here.

I think Russia over extended with reaching out to trump.Id be surprised to see sections lifted any time soon with out a big fight with congress.Its a shame.We could do so much together.Fight teroisim r colonise Mars n such

As long as the sanctions stay and the war remains cold, we are all good.

Yeah, in current situation they are much more harmful to the already weakened West than to us, russians. Also cold is nice and stimulating =)

It’s been going for a long time now.

The sanctions matter less and less to Russia. They are dealing with it, making adjustments and they were never really brought to their knees by them. For instance, the war in Syria as part of it’s design, was to cut Russia partially out of the oil and natural gas trade there. Didn’t quite work out there fellas. Russians are laughed at but, they still sell the rockets engines to NASA. Industries within Russia are being rejuvenated not because it’s cool but, because they had to do it. It would be interesting to see how many keep chuckling if the SU-50s ever start shooting down F-35s. Talk is cheap except on the battle field.

On the other hand, the EU is having problems swallowing what they dished out. The screaming has been muted in the press but, more of the complaining by EU members is leaking out. If the Russians truly rolled out a new cruise missile today, as was reported in Reuters, it is another marker that they could care less about sanctions at this point and everybody needs to get used to things being more dangerous. So, either patch it up with Russia or what keeps coming will not be pleasant for anybody.

What the press misses, in my view, is that the White House is not reacting to them. They were blown away in the election. Noone listens to dead bodies that have had their feet dipped in concrete and are currently living on the bottom of the political river, as the general US and EU press is doing now. So claiming relevance is nonsense. Also, the White House is reacting to what is actually on it’s plate. The press is nonexistent there too.

The ‘msm’, that’s right small letters now, can blah blah blah all it wants. How many are really paying them any mind. I wish a good evening to all.

Sanctions are hurting. Just recently RU has sold 25% shares from its jewel in the crown to Qatari Fund. Ukraine should have been overrun and democratically elected president installed back to power and later on called an early election as it was prior agreed by EU and Ukrainian legitimate government..

Horse and Pony show for the gullible masses. Trying to paint the picture of Trump being the average joe’s President, against the establishment. Ya right, its all just a shell game folks. Beware. Trump is the Swamp. Just look at the hard core Zionists he’s surrounded himself with.

You are watching too much FAKE NEWS.