While globally Italy lost its position of the number one coronavirus hot spot to the United States, in Europe it still keeps the leading position with 92,472 confirmed cases and 10,023 deaths of people infected by COVID-19.

As of March 28, the outbreak in Italy has hit mostly people over 50 years of age. According to open data, over 74% of people infected with the COVID-19 was over 50 years old. Only about 25% of infected people are in the age between 19 and 50. 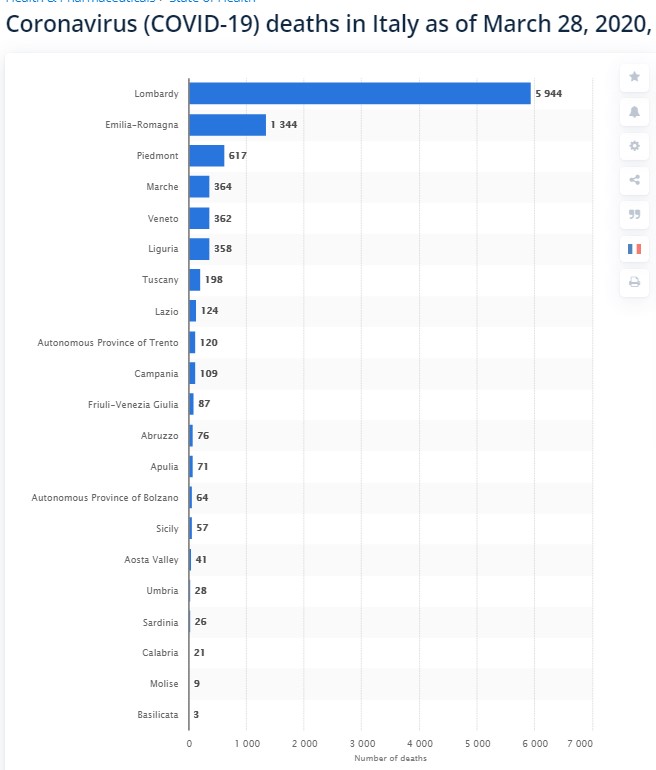 According to media reports, a majority of people that died during the outbreak in Italy had chronic health problems, including hypertension, diabetes, coronary heart disease, and trial fibrillation. Local media say that up to 20% of patients suffered from chronic renal failure and cancer and more than 11% suffered a stroke.

For example in Russia, 45% of critical COVID-19 cases involve people younger than 60. As to the employment of ventilators, nearly 40% of patients are younger than 40 years old. The proportion of such patients under the age of 60 is as much as 64%, that is, two-thirds of all patients with ventilators.

At the same time, the confirmed death toll from Russia provides a look similar to those in Italy. There are 8 cases when the Russians died from ‘COVID-19’:

If Italian authorities provide additional data on patients that supposedly died from the COVID-19 outbreak, it may appear that the situation there is similar.

Some Italian doctors are saying that those who died did so with the virus and not because of it. It’s a virus and so will cause complications in some but not others. Either our gov’ts are being economical with the truth or the hysteria they have created is a cover for something more sinister. A case of ‘don’t look there, look here’.

Superpower and industrial countries are using humanity as their springboard and cleaning clothes.

If you believe Italian government officials clarifying the virus deaths. Of the 10,000 “virus deaths” only 1,200 people have died from the virus:

“I want to stress that they have died having coronavirus, not because of it”, the head of the country’s Civil Protection Department, Angelo Borrelli said at a briefing.”

Die off covid and die WITH covid os NOT the same thing. It seems like italy would say you died off covid if a car ran you over if they find the virus in ur blood instead of saying you died WITH covid. This is about control and power, not health.