Is Putin manipulating the Clinton campaign? 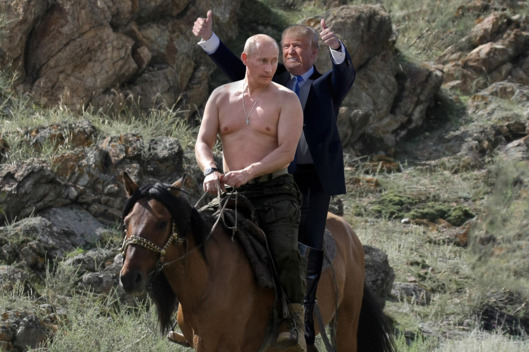 According to Clintion, it looks this way

Russia is weaponizing everything: Word files, federalism, finance and Jedi mind tricks – everything is transformed into a weapon if Russia or its president Putin is imagined to come near it.

But Russia is secretly plotting even more nefarious schemes. Putin is infiltrating Europe. And not only Europe.

Putin, the President of the Russian Federation, is influencing, manipulating and controlling many “western” politicians, parties and movements – in Europe AND in the United States.

Here are, thanks to Mark Sleboda, a partial list of political entities and issue Putin secretly manipulates and controls:

And now for the crown of it all.

.. further evidence the Russian government is trying to influence the outcome of the election.

The “facts” proving Russian support for Trump are mostly lies, but Putin’s nefarious intentions must still be speculated about.

The Clinton campaign has not looked thoroughly enough into Putin’s schemes. Reveal we can that Putin has penetrated U.S. politics even deeper than thought – right down into the Clinton Foundation and the Clinton family itself:

As the Russians gradually assumed control of Uranium One in three separate transactions from 2009 to 2013, Canadian records show, a flow of cash made its way to the Clinton Foundation. Uranium One’s chairman used his family foundation to make four donations totaling $2.35 million.

That money, surely, had no influence on then Secretary of State Hillary Clinton’s decisions? And what about her husband?

Mr. Clinton received $500,000 … from a Russian investment bank with links to the Kremlin

These undisputed facts demonstrate that Putin is indeed waging influence by bribing U.S. politicians. But the Clinton campaign is be a bit more hesitant in pointing these out.