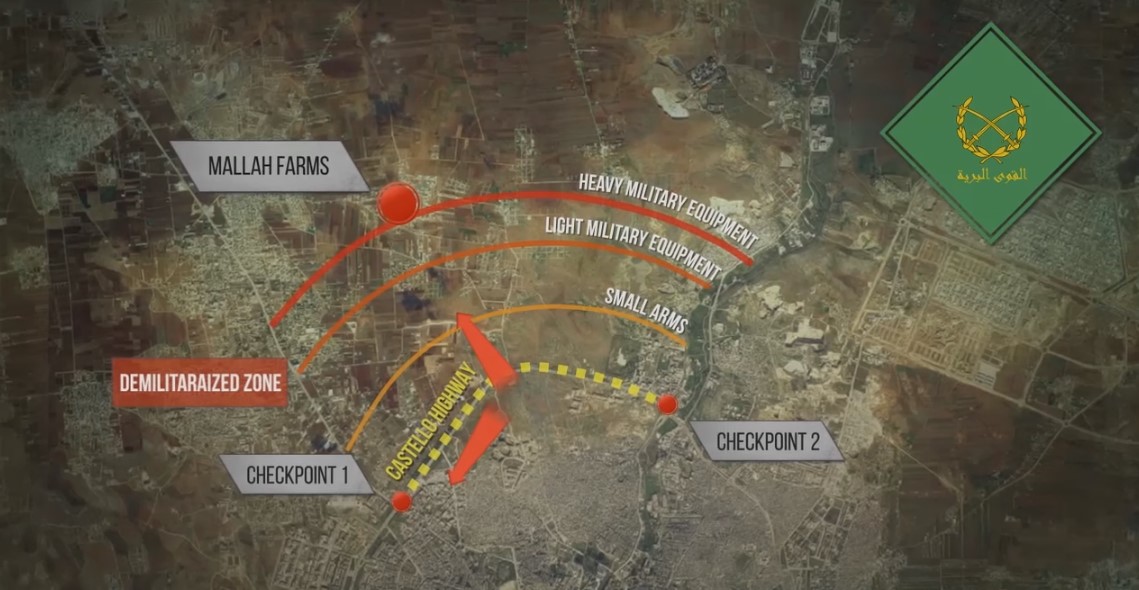 Today, the Syrain army has been forced to return to the Castello Highway (is set to be turned into a humanitarian corridor according to the US-Russian agreements) in northwestern Aleppo after militants of the US-backed Jaish al-Fatah operation room shelled Russian military servicemen and representatives of the Red Crescent Society in the area. There are also reports that militants have attempted to advance in the area.

The Syrian army answered to this deploying forces along the Castello Highway and the Russian Aerospace Forces, according to AlMasdarNews, delivered an air strike on the militant-controlled 46th Regiment Base in northwestern Aleppo. This has been the first Russian air strike in Aleppo since the implementation of the ceasefire agreement.

We recall on September 15, the Syrian army started to withdraw heavy and light military equipment from the strategic Castello Highway and hand over checkpoints along it to the Red Crescent Society and representatives of the Russian centre for reconciliation of opposing sides in Syria. Separately, a representative of the Russian Defense Ministry said that creation of a demilitarized zone at the Castello Highway may be halted if militants continue to ingore the casefire regime.

Meanwhile, reports reports appeared that the US-backed ‘opposition’ is preparing a fresh full-scale advance on the Syrian army and its allies in the northern part of Hama province. It’s important to note that the reports are observed in the both pro-government and pro-militant sources.

US and allies including head chopper scums can never be trusted. These ceasefires are nothing but a tool to take away momentum from SAA

Aleppo is lost run, run away russia before it is too late, run

What are you talking about, dude? Aleppo is sieged tight, these are just desperate attacks.

Tom Johnson type morons are all that US manage to get to do its propaganda nowadays. Naturally it fails there too, in addition to battlefield.

His moronic avatar also fits him well, too. But actually these types of obvious propaganda trolls should be banned from sites like South Front, since they are sent with the sole purpose of making the comments forums unpleasant and degraded.

Take it easy. Tom Johnson provides a nice comic relief, have a good laugh and relax.

Aleppo is lost to the Russians? According to the lying narrative coming out of the west? Russia and Syria along with its allies have won the battle of Aleppo.

These c/h mean nothing to the jihadists, its time Russia sent in some boots on the ground , before Obama or Hilary sends in the marines. This war could be over in a month , negotiate from a position of strength.

Exactly – but unfortunately today’s Russian government are a bunch of paper tigers who still insist on calling the evil U.S. leaders “partners”.

A bit more complicated than that. The majority of Russians are still opposed to sending Russian ground troops into combat in Syria. Afghanistan and Chechnya haven’t been erased from the Russian collective memory to the degree that short-term memory Americans manage forget all the forsaken places they’ve died for Globalists and corporate profits. Putin is actually interested in his public support, so he is stuck skirting the edges, using artillery, PMCs, spetsnaz, and deploying the naval infantry in defensive operations like the Castello Road.